The Evolution Of Windows 8 For Keyboard & Mouse Users

Windows 8.1 computers are getting a significant update on Patch Tuesday this week, part of Microsoft’s continuing effort to improve the Windows 8 experience for keyboard and mouse users.

It’s not a coincidence that Windows 8.1 Update (the official name) arrives on the same day that the very last security patches are released for Windows XP. There are almost 500 million Windows XP computers in the world and Microsoft is trying valiantly to remove barriers that have kept people from upgrading to new computers running Windows 8.

Steven Sinofsky was the executive at Microsoft who insisted on releasing Windows 8 with many familiar pieces missing – no Start menu, no Start button, no persistent onscreen buttons for search or power, no taskbar or X in the upper right corner of Metro programs, and new and unfamiliar controls for Control Panel operations. He badly underestimated the need that many – perhaps most – people have for continuity, and opened Microsoft up to bitter attacks for what was quickly labeled as high-handed disregard for users.

It’s now likely that Windows 8 will be remembered as a Vista-like debacle. Sinofsky is gone, and virtually every important executive who worked with him has either left the company or been sidelined.

Microsoft is working hard to rebuild Windows 8 to make it more comfortable for keyboard and mouse users who spend most of their time on the traditional Windows desktop. It’s a process that began with Windows 8.1, which brought back a kind of Start button, and continues with the Windows 8.1 Update this week.

There are no major changes in the Windows 8.1 Update but there are small changes throughout that add up to a nicer experience.

Take a look at the upper right corner in the above screenshot. That’s a power button onscreen, just like it should have been all along. One of the stranger decisions in Windows 8 was hiding the power controls in the Charms bar under “Settings.” Windows 8.1 helped a little bit by adding Shut Down and Restart controls to the power menu if you right-click the Start button. Putting a power button onscreen is a no-brainer.

Next to the power button is a search button. You don’t need it – you can start a search on the Start screen just by typing. Yet it’s somehow comforting to have it there – and frankly, most people never quite understood that they could start typing at the Start screen to do a search. (In fact, a search from the Start screen in Windows 8.1 will show results in a full-screen view that includes programs and apps, Control Panel settings, results from your files and pictures, and results from a web search, all on one big scrolling pane. Try it! Do a search from the Start screen and hit Enter after you type in a search term. It’s a great presentation, and almost no one knows it’s there. Which is kind of the problem with a lot of Windows 8 features.)

This screenshot shows another new change: a flyout right-click menu coming out from one of the Start screen tiles. It will only appear when you use a mouse on the Start screen – touch gestures will still produce bars sliding in from the top and bottom, as they do now. Is it an improvement, or does it add more confusing inconsistency? Let me know after you try it. 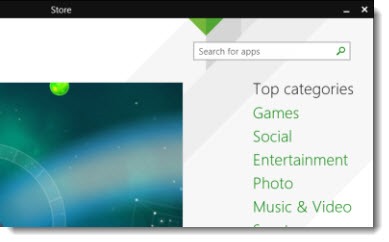 There are more tweaks in Windows 8.1 Update – improvements to Internet Explorer, better handling of new apps in the Apps menu, and more. Paul Thurrott has an exhaustive discussion here.

If you are a Windows 8 user, it’s time to be sure you have installed Windows 8.1. (Easy way to check: at the Start screen, type in “system” and click on PC Info or System in the search results.) If not, go to the Store and get the Windows 8.1 update under way when you have a few hours to spare. Details here about the Windows 8.1 install process and some suggestions about what to configure after Windows 8.1 is installed.

Then keep an eye out for the changes after Patch Tuesday. If you’re a keyboard and mouse user considering a new computer, it’s going to be easier than ever to have a good experience using Windows 8.