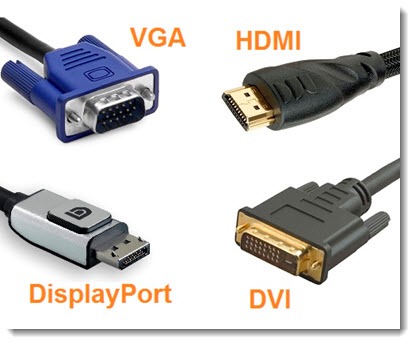 There are too many possible connections for monitors. It’s increasingly likely that you won’t be able to set up the monitor configuration you want without frustrating trips to Amazon searching for the right adapter.

There are no answers here except to be prepared for stumbling blocks when you set up a new computer and monitor, especially if you have a laptop and you want to use dual displays.

The picture above shows the four basic connectors in widespread use. Any of the above connectors might be available on your computer or docking station. Each has different abilities – and two of them come in several different sizes.

Similarly, your monitors may have places to plug in some of those connectors, but not likely all of them.

There are adapters for many (but not all) of the possible combinations – HDMI to DVI, for example. Not all combinations are possible and video quality can vary depending on which adapter is used. It quickly turns into a frustrating exercise to figure out what you need.

Let me give you some glimpses into ways that this becomes confusing.

VGA is the traditional analog method of connecting a monitor to a desktop computer. DVI is a digital alternative that has been widely supported for years. Picture quality has always seemed to be identical between VGA and DVI, so almost everyone hooks up the VGA cable and puts the DVI cable in a drawer. VGA and DVI are slowly beginning to be phased out.

HDMI and DisplayPort are now widely used in laptops and tablets. In the last year they’ve started turning up more frequently in desktop computers.

HDMI cables carry video and audio. There are three different possible sizes – HDMI, Mini-HDMI, and Micro-HDMI. New monitors likely have full-size HDMI inputs; older and cheaper monitors do not. Tablets and thin laptops might have Mini or Micro-HDMI outputs, which will work with an external monitor if you have the right adapter cable.

DisplayPort cables only carry video. There are also three different possible sizes – DisplayPort, Mini-DisplayPort, and Micro-DisplayPort. Even worse, DisplayPort connectors look almost identical to HDMI connectors, making it hard to figure out which output is built into a laptop.

Admit it – your eyes glazed over when you read the last few paragraphs. It’s 2014 and everything is getting simpler, right? There is nothing like the feeling of getting a Mini-HDMI to DVI adapter cable and discovering that what you really need is a Micro-HDMI to DVI cable, and who knew there were two different midget HDMI sizes, anyway, and by the way they all look identical to the goddamn mini-USB connectors used on phones, which is just stupid when it comes time to look for a cable in the messy drawer.

Let’s just say: I’ve been there.

Attaching a single monitor to a laptop seems like it ought to be easy but the variety of screen resolutions and scaling is starting to make it unpredictable. The laptop screen and monitor may require different resolutions; the computer may or may not do a good job of handling that, and the type of connector may make a difference, resulting in a monitor display with black bars or a fuzzy picture. Ed Bott wrote an article recently that describes his experiences with different monitor and adapter combinations:

“My testing with a cheap 24-inch Full-HD LCD monitor, with only VGA and DVI inputs, was occasionally problematic. Using a VGA connection, I couldn’t get the display to sync up properly, leaving a blank area on one side of the screen. Using a kludgey Mini DisplayPort-to-HDMI-to-DVI adapter, I got a perfectly sharp image on the external display. But in every configuration involving an external monitor, I had to deal with display scaling issues.”

Theoretically DisplayPort can support two monitors with a single cable, by daisy-chaining the monitors together. Unfortunately that’s a new standard so it only works if the computer supports the latest version of DisplayPort, and there are only a handful of monitors that meet the very precise requirements. Supposedly there are “DisplayPort 1.2 Multi-Stream Transport hubs” that provide some flexibility in cables and connectors but I haven’t even begun to look into that nightmare. This is new technology and there are many stories online from people who are not having smooth experiences.

There are a variety of docking stations that connect to a laptop with a single USB 3.0 cable, then allow one or two monitors to be plugged in with standard DVI cables. It works reasonably well but the picture will not necessarily be as good quality as if the monitor was connected directly to the laptop. There are more likely to be issues with black bars and scaling, and the computer may run hotter to support the USB connection.

There are anecdotes suggesting that cheaper monitors are more likely to have problems with dual monitor setups, especially when laptops are involved. I don’t yet understand the rules of that game. What monitors are good enough that we won’t regret buying them? Should everyone buy Dell’s expensive Ultrasharp monitors just to be safe? I don’t know yet. But I’ve had some poor experiences lately that have me a bit gun-shy.

Don’t despair. Dual monitors are frequently easy to set up, and almost always appreciated. Just be prepared for some headaches during the process of setting them up when you discover that you don’t have the right cable or the pictures aren’t quite right. Things are messy in the display world right now.