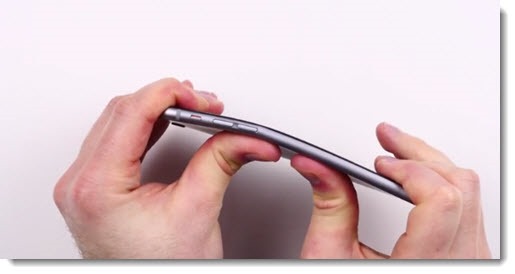 The picture above shows an iPhone 6 Plus being bent by someone with his bare hands, giving credence to complaints that the new iPhones are bending in some users’ tight jeans pockets.

A video showing an iPhone 6 Plus being bent went viral on Wednesday as tech blogs and Twitter lit up with articles and comments about the “defect.” The video has been watched 17 million times as of Wednesday evening.

No one can predict if it is a serious long-term problem or if it’s a non-issue that will fade away after 24 hours. Who knows? It certainly generated a lot of buzz in today’s news cycle. 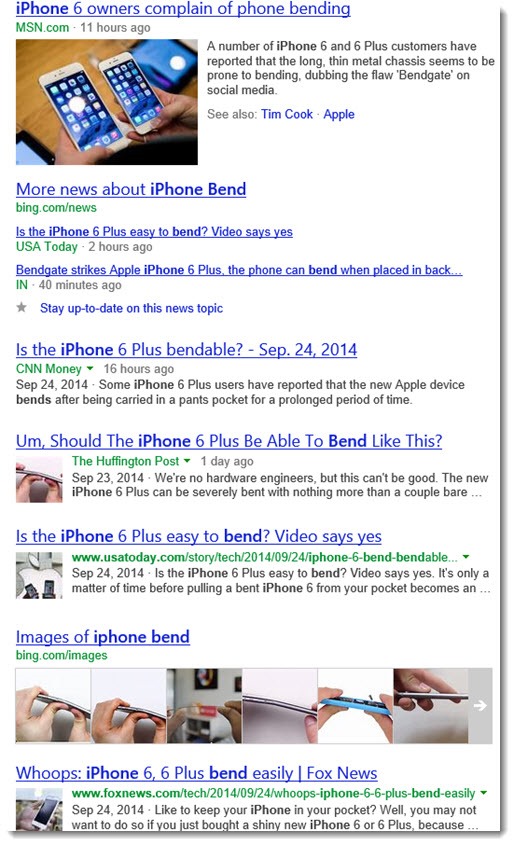 What’s interesting is that it was only Apple’s second-biggest problem on Wednesday. The bigger problem was a botched patch for iOS 8.

The new iPhone 6 and iPhone 6 Plus are running iOS 8, a new version of the phone operating system. There were some embarrassing problems with the first release of iOS 8; one particularly nasty bug forced Apple to yank all apps connected to its new HealthKit service, which was intended to be one of the flagship features of the new phones. There were also bugs with third party keyboards, an eagerly awaited new feature, along with bugs in Photo Library, SMS messages, and Reachability (the feature that makes it easier to use your thumb to reach things at the top of the big iPhone 6 Plus screen).

Okay, a bit of a mess but nothing unusual. Microsoft and Apple are frequently in this position. Operating systems are developed and polished and at some point a particular build is declared “final” and shipped to the manufacturing plant or the OEMs building devices. Apple probably sent the “final” version of iOS 8 to China a month or two ago so it could be installed on ten million phones.

During that month or two, the engineers keep working. By the time the devices hit the market, they’ve had time to fix more problems or neaten things up. Pretty typical to have an important update right after a device is released.

On Wednesday afternoon, Apple released iOS 8.0.1, an update intended to fix that first batch of problems.

It broke a lot of phones. Reports immediately began flooding in that after installing iOS 8.0.1, phones were losing all cell service and the Touch ID fingerprint sensor was not working. (If I understand the reports right, the problem only affects iPhone 6 and 6 Plus, not older models.)

Apple hastily yanked the update and hid under the covers for several hours, refusing to issue any statements about the problem or how many people might have been affected. If you were to judge by the volume of complaints in the media, on tech forums, and on Twitter, you would probably assume it affected every single person in the world. Wednesday night Apple finally posted a support document with instructions for rolling broken phones back to iOS 8 and promising that iOS 8.0.2 will be along Real Soon Now.

People will vent online but this will pass quickly and users will go back to enjoying their new iPhones, which have some features that are a significant step ahead of Android and Windows Phone.

The underlying reason that it was a No Good, Very Bad Day for Apple is that the bending iPhones and botched update are chipping away at Apple’s reputation for building devices and services that “just work.” And they aren’t the only things that haven’t gone right for Apple lately.

Three weeks ago the leaked nude celebrity photos caused a 24-hour media uproar. It was widely understood that the photos were obtained by hackers through weaknesses in Apple’s security. That’s probably not true, but that was the impression that most people came away with.

Another one: Apple thought it would score points by giving away U2’s new album to everyone with iTunes but what was reported was mostly backlash. People seemed surprised that Apple could shove something into their music libraries willy-nilly. There’s a generation that has no attachment to U2 and got the impression that Apple is run by old, out-of-touch execs pushing dinosaurs. (Apple can’t be held responsible for the real problem, which is that the album isn’t very good.)

Then Apple struggled with its own staggering ineptitude in a story that was not widely reported outside of the tech press.

The iPhone launch on September 9 was built up by Apple’s brilliant media team into a global event. Journalists gathered in a historic auditorium (the same one used to announce the first Mac) and the event was streamed live online to millions of people.

Except it wasn’t. The live stream was a massive failure. Most people saw a test card (like an old TV test pattern) for much of the first half hour. When the audio and video eventually started, it was pixelated and frequently stopped and started, going back in time several minutes when it restarted, skipping and stuttering.

For twenty minutes or so, the audio included a loud Mandarin translation drowning out the onstage speakers. That’s right – if you watched the live Apple introduction of the new iPhones, you heard twenty minutes in Chinese.

This is the largest company in the world, introducing the flagship products that will power billions of dollars of sales, at its most important annual public event. And it couldn’t handle it.

Consumers are not going to turn away from Apple. They shouldn’t. The new iPhones are brilliant.

But Apple dreams of cracking the enterprise market in ways that have eluded it, slowly turning the business world away from Microsoft-centric enterprise computing. The glitches and PR disasters this month have eroded the trust that Apple can deliver enterprise-level quality and reliability.

No good, very bad day, and really not a great month in some ways. It’s hard to argue with ten million iPhone sales in three days but Apple probably wishes the rollout had been smoother.