Skype Basics: What It Does And How To Install It

Skype has become a story of duplicates – two programs, two ways to log in.

Skype’s core function is video and voice calls over an Internet connection to anyone else using Skype, from a computer or other device running Skype software, signed into a free Skype account. Let’s start with a quick description of the other things it does, followed by some information about how to install it on a PC and how to log in.

•  Audio and video calls to other Skype users are free. As of a few months ago, the free service includes group video calling.

•  Microsoft bought Skype in 2011 but appears to have left it mostly independent, so it is not yet closely integrated into other Microsoft programs. There is some light Outlook integration (Skype can display your Outlook contacts, and you can start a Skype call from within Outlook).

•  You can pay to use Skype to dial out to landlines and cell phones worldwide. Pricing plans are complex (monthly subscriptions vs. pay-as-you-go, either for particular countries or worldwide) but cheap, especially for international calls. Office 365 Home and Personal subscriptions include 60 minutes per month of worldwide Skype calls.

•  You can also pay for a “Skype Number” – a conventional phone number assigned to you that will ring your Skype account when someone dials it from a landline or cell phone. You can select your Skype Number from many area codes or countries; for example, you could set up a number in Switzerland that would be a local call for your Swiss relatives and you’d receive it over Skype no matter where you are in the world.

There are a number of other Skype peripheral features – “Skype WiFi” available at hotspots worldwide (charged by the minute), some business features, file sharing, text messaging, and more.

Skype is available on every platform: Windows, Mac, all smartphones and tablets, even Xbox One and Playstation.

On Windows 7, you’ll install the desktop version of Skype.

On Windows 8, however, there are two versions of Skype. You’ll have an easier time if you pick one and uninstall the other.

“Skype for modern Windows” is a Windows 8 app that can be downloaded from the Microsoft Store. It is preinstalled on most Windows 8 computers. This version uses the Metro design for fullscreen apps – lots of white space, large text, simplified controls, and menus that only appear when you swipe down from the top or right-click. Many of the new Metro apps are quite nice but I find the Skype app confusing and annoying, so I uninstall the Metro version and use the old familiar desktop version. You can uninstall “Skype for modern Windows” by right-clicking on the Skype tile on the Start screen and clicking on Uninstall.

“Skype for Windows desktop” is the traditional version of Skype. It can be installed on Windows 8 in addition to the Metro app but your experience will be better if you only have one installed and remove the other.

When you install the desktop version of Skype, be alert for two screens with checkboxes to be unchecked. The first one attempts to change your browser home page and search engine, the same technique used by scummy adware. Microsoft should be ashamed of this one. Uncheck those boxes! 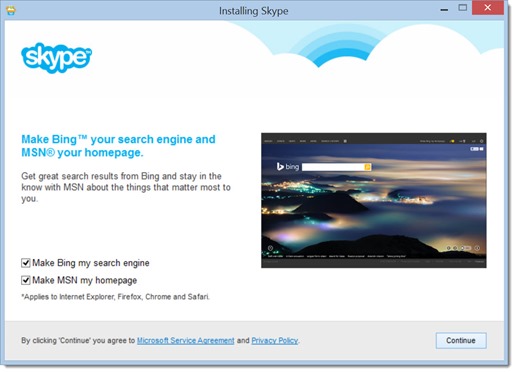 The second one attempts to install Skype Click To Call, an Internet Explorer plugin that searches web pages for phone numbers and highlights them so you can start a Skype call with a single click. No one has ever wanted to do that and the plugin is notoriously buggy. Uncheck the box and don’t install it. If it’s installed, it shows up separately on the list in Control Panel / Installed Programs and can be removed from there. 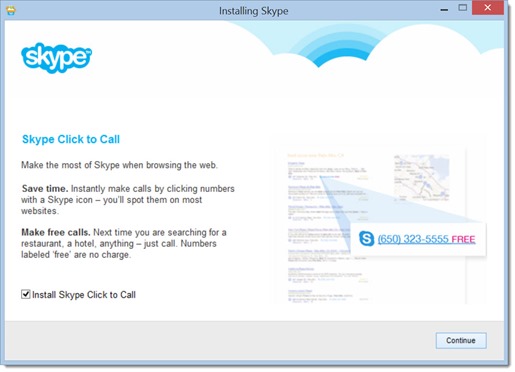 For eight years Skype was independent and millions of people logged into Skype with their Skype names – frequently Firstname.Lastname. My Skype name is Bruce.Berls, for example.

When Microsoft bought Skype in 2011, it began the process of linking Skype accounts to its own free Microsoft accounts. You can log into Skype with a Microsoft account or a Skype name. The important thing is to remember which one works for you!

Skype is overdue for an overhaul that will integrate it more deeply with Windows and Office. Microsoft has an enterprise program, Lync, which overlaps with Skype and is clumsily able to connect to it. At times Microsoft has hinted that the two programs may wind up merged but progress has been slow. No reason to wait – put Skype to work today.