Getting Started With Android: Reading & Listening 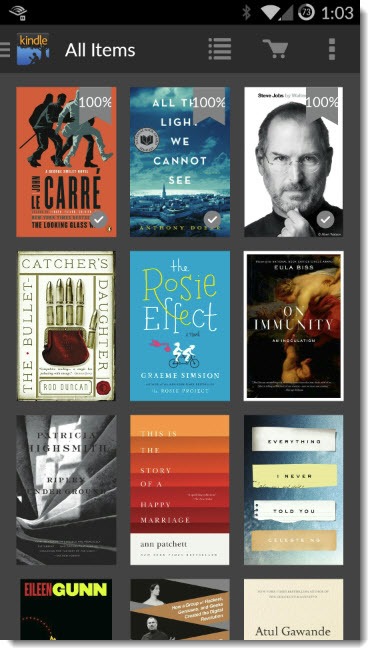 The OnePlus One phone has given me a chance to explore the world of Android apps. Here are some of the apps that I’ve been using for the last couple of months for reading and listening. Some of them are specialized but perhaps you’ll get an idea for an app that might work for you.

Kindle for Android  Once Audible was set up for audiobooks, Amazon’s Kindle app was the next thing I installed. I own a Kindle and prefer to use it, but reading Kindle books on the phone is quite a nice experience and makes it easy to read a few pages on the fly when the Kindle isn’t nearby. Amazon has long understood that we would want our stuff on all of our devices; your Kindle library is available on any and every device you choose – Kindle, phone, tablet, or computer. Amazon’s syncing technology works smoothly to mark your place so you can start reading where you left off, regardless of which device you pick up.

Feedly  I keep up with technology news by following more than a hundred websites with an RSS reader, Feedly, which took over smoothly two years ago after Google killed the late, lamented Google Reader. Feedly’s Android app is so well designed that it’s now my favorite way to go through the hundreds of new articles that appear every day.

Twitter  Twitter is wildly popular. It’s also maddening and stupid and frustrating and difficult to get started with. It makes me feel old. But I’m trying to figure it out and I’ve put together an occasionally interesting firehose of tweets from technology leaders and journalists. At one time there were several high-quality apps for reading Twitter streams on Android but Twitter decided it couldn’t tolerate losing any advertising income, so it is forcing out all the third party developers and making the official Twitter app the only choice on phones. It’s barely acceptable, and not getting any better as Twitter fusses with it. Most of the time I don’t bother with the phone and read tweets with Tweetium, a nicely designed third-party Twitter client for Windows 8.1.

MSN apps  Do a search for “MSN” in the Google Play store and you’ll turn up the apps that Microsoft created for Windows 8 and ported over to Android. MSN News, MSN Money, MSN Sports, MSN Food & Drink, MSN Health & Fitness, and MSN Weather – they’re all clean, well designed, and packed with features, just like the Windows 8 versions.

Spotify  When it’s time to listen to music, Spotify is the only app that most people need. For $9.99/month, you can listen to anything – virtually any album, any artist, new songs, old favorites, playlists galore, radio, anything you can think of. The app is free but paying the monthly fee removes all the restrictions and adds the ability to download music and listen to it offline – on the plane or in areas without cell service. Tip: as near as I can tell, only playlists can be made available offline. The option isn’t there for artists or albums. It’s easy, though, to create a playlist from a single album, then download the playlist for offline listening.

Pocket Casts  Podcasts are big business these days. Leo Laporte is building a tech podcast empire from a brick building in Petaluma on Twit TV, and the field is exploding just as blogs did a few years ago. There’s no shortage of podcast apps! After testing a few, I bought Pocket Casts – elegant design and all the features I want with no distracting bits.

Rocket Player  After attaching the phone to the computer with a USB cable and copying music files to the Music folder, I went looking for an app to play the tunes. Most of the effort by the big companies now involves streaming from online libraries, but I’ve got Spotify for that. Again, I tested a few music players and picked Rocket Player, which is reasonably simple and clean. (This category in particular seems to draw a lot of developers who think apps ought to be garish and cluttered.)

Plex  I’ve got a big music and video library on a NAS at home. With some effort I set up Plex on the NAS and configured the firewall so I could talk to it from anywhere. Plex is a media server that organizes your collection and opens up a world of possibilities for what to do with it. I can watch movies on my phone, tablet, or laptop, or stream music, or download offline versions of anything in my library. There are Plex apps for every kind of device, like the Android app for my phone. It’s becoming the most popular platform for anyone with large media collections.

Here’s Paul Thurrott’s article about his experiences when he discovered Plex recently. I’ve purchased a lifetime Plex Pass and spent time configuring the firewall to let Plex through. Plex transcodes video appropriately for each device so it can be viewed regardless of its original format, a difficult task that it handles better than any other program. I’ve had to work around some difficult moments because my NAS can’t transcode fast enough to stream video without pausing and buffering. Recommended, but perhaps only for reasonably technical folks.

Gizmo  JRiver Media Center has been organizing and playing my media library for fifteen years. It can also be set up to stream audio and video to wherever you are, with some firewall effort and a bit of time to puzzle it out. Gizmo is the Android app for streaming music and video from a JRiver server to an Android phone. This only applies if you’re running JRMC on your computer, but it works perfectly for those happy few. I use it more often than Plex because it’s easier to navigate and I have access to my carefully groomed playlists.

This is, of course, only the smallest taste of what’s possible with media on a phone but it keeps me entertained. Happy listening and reading!