Getting Started With Android: The Wide World Of Apps

There are 1.3 million Android apps. I’m working on it but I haven’t tried all of them yet, and anyway, each of you will have favorites and essentials and frivolous time-wasters that suit you. I’ll describe a few of the apps that are on my phone, just in case it helps you find something new and useful.

As an aside, you’ll recall that my phone is the OnePlus One, a very likable and inexpensive Android flagship phone – $299 for the 16Gb white phone, $349 for the 64Gb black phone, both unlocked and able to be used without a contract on any carrier except Verizon. Starting today, you can buy the OnePlus One without an invitation – on Tuesdays, from midnight to midnight PST. You’ll need an invitation if you get the urge to buy on Wednesday, but you’re in luck on Tuesday. No, it doesn’t make any sense, but hey, it’s easier than scrounging for an invitation.

Lots of apps can use the camera on your phone and take a picture. That’s how Instagram and Snapchat have taken over the world, after all.

If you just want to take pictures without any fuss, Google Camera may be simpler and better than the basic camera app that shipped with your phone. You can set it as the default and never think about it again.

Your pictures are probably being backed up in the cloud, whether you realize it or not. If you are a OneDrive or Dropbox user, make sure you install the apps and set them to upload your pictures automatically so they wind up somewhere that you can find them!

I didn’t like the default Gallery app for looking at pictures, so I’m happily using QuickPic to view photos.

Google Maps is likely to be your first choice for maps and directions. Keep in mind that Nokia offers HERE Maps for Android for free with the advantage of being able to download maps to use offline – a big deal if you’re traveling somewhere without a cell phone signal or wireless. Here’s more info about HERE Maps.

The onscreen keyboard can be changed! Google makes the best Android keyboard; you may find it’s far better than the keyboard you’re using now. It’s been updated recently with elements of Google’s “Material Design,” the aesthetic that Google is rolling out in new versions of Android and its other products. It’s clean, simple, and elegant.

Here’s an intuitive use of the phone that took me by surprise: your phone makes a great magnifying glass. Install an app like Magnifier and the phone will use the camera to magnify small things without any fuss. It has buttons to turn the flash on and off, zoom in and out, etc., but mostly you point it at something and it makes it big. Why didn’t I think of that?

If you pay $12/year for LastPass Premium, you can install the LastPass mobile app on your phone. It’s clumsy to use because it runs separately from the phone’s web browser. Looking up passwords involves an unintuitive copy-and-paste action. But I’m never cut off from my passwords and secure notes, which is worth the effort.

There are more, of course. Your choices will be different from mine. The RingCentral app for Android dials my outgoing calls and shows you my RingCentral number, so you never see the AT&T number for the phone. Between Box and OneDrive, I have access to all of my documents and pictures, and OneNote connects me to all the info stored in my notebooks. I have a smattering of apps for the new world – Uber for rides in big cities, Taskrabbit for connecting with a handyman or house cleaner, Endomondo for exercise and fitness. The apps add up fast!

There’s one more trick. Android supports “themes,” collections of icons, fonts, and layouts to give the phone a makeover. There are thousands of themes, of course. Aren’t there thousands of everything? I found a theme that struck a nostalgic chord in my heart, so this is the front screen of my Android phone. 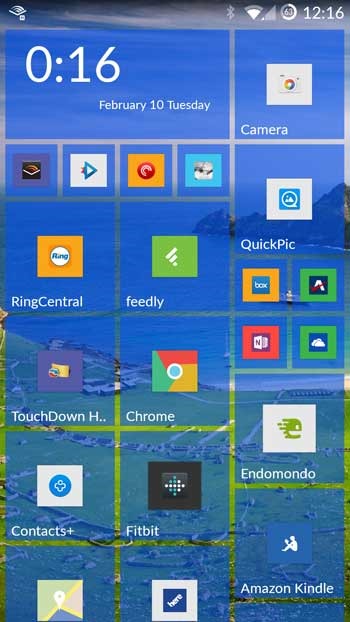 Yup! I’ve gone to Android, but Launcher 8 makes my phone look like a Windows phone.

Even better, the theme presents all the apps in a scrolling list when I swipe to the right, just like Windows phones. It’s a replacement for the unsorted walls of icons in Android and iOS phones. I’m happy to have it back. 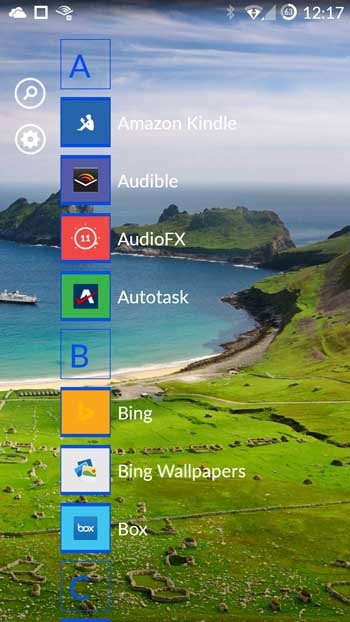 Your mileage may vary. Launcher 8 is a labor of love by someone who clearly is not very comfortable with the English language and who might not be a very good programmer. It’s been working for me, and I have to admit I still really like the look of Windows phones.