USB-C: One Port To Rule Them All 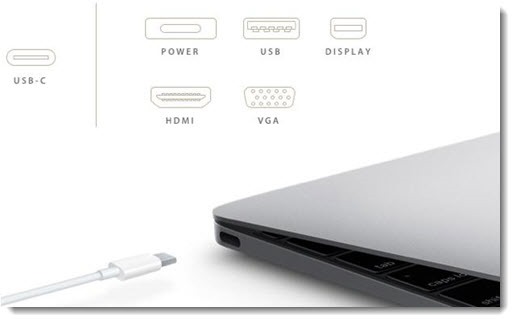 The next generation of USB is making its debut this month, and it’s a big step forward. USB-C is so much more versatile than existing ports that it can and eventually will replace most of them. It doesn’t just handle USB devices like memory sticks and external hard drives; USB-C can also handle high-resolution video, Ethernet data, and it carries power in and out, allowing it to be used to charge a computer or for the computer to charge a device plugged into it. Even more amazing: a single port can do all of those things simultaneously. Starting later this year, PC laptops will start to include USB-C ports alongside traditional USB ports, and before long the other ports will start to disappear until USB-C is the only port left.

Apple is leading the way. USB-C is in the news because Apple’s new 12 inch MacBook has one, and only one, port, a USB-C port. No old-style USB port, no power port, no video out, just a single USB-C port that requires an expensive adapter to use with existing peripherals and monitors. There will be a fuss raised during the transition by people who are upset about Apple’s decision to leave out all the other ports for devices people already own, but my guess is that this will look perfectly natural in a year or two, when this configuration of MacBook will likely still be on sale.

Google is second to get on board, with two USB-C ports included on its new overpriced Chromebook Pixel, a laptop that is almost exactly as pointless as the original Chromebook Pixel. The Chromebook Pixel also includes two standard USB ports, which gives you a preview of what to expect in the PC world.

Although nothing is announced, it’s likely that Windows laptops will begin shipping with USB-C ports later this year. At first, other ports will also be included to meet your expectations – you’ll also have conventional USB ports, perhaps HDMI or DisplayPort for video out, maybe even proprietary chargers for a while. In the PC world we’ve proven that we don’t like change to happen very fast.

When USB-C becomes standard, though, and we get over the angst of needing an adapter for old devices, the world might actually be a slightly better place. A standard port for charging a computer means it won’t be a crisis to lose the proprietary chargers that come now with our laptops, every one with a unique connector. Instead we’ll be able to swap power adapters and buy them inexpensively from third parties, just as we do with Android phones now that mini-USB connectors are standard.

The USB-C port is thinner than conventional USB but perhaps its most appealing feature is that it is reversible. We will never again have to flip a USB cable over for it to fit correctly. This will lower stress and extend our lifespans.

As you’d expect, USB-C ports are backwards compatible with previous generations of USB, but they will move data far more quickly to and from USB-C devices. Expect a new generation of external hard drives that can store and retrieve data almost as quickly as internal drives.

If you look around online you’ll find lots of angst about Apple’s decision to equip the new MacBook with a USB-C port and nothing else. What about our existing USB DVD drives / USB external hard drives / USB memory sticks / power adapters / monitor cables? Another $79 and a dangling adapter stuffed with cords? Oh, the humanity!

Don’t laugh. You’ll be there too as Windows laptops evolve.

Think about that evolution for a minute. You’ve already lived through many standard laptop ports and accessories that have come and gone. This is just another step on a long road.

•  If you’re old enough, then your first laptop probably had a floppy drive.

•  Your laptops had CD and then DVD drives for many years, but your current one probably does not. (If it does, admit it – you probably never use it.)

•  It was common until recently for laptops to have an Ethernet port. The thick ones still do but it’s being left off of thin ones in favor of wireless and USB Ethernet adapters.

•  Most laptops had blue VGA connectors (the ones with three rows of pins) for many years. Now the video out is just as likely to be HDMI or DisplayPort and you may have already dealt with the annoyance of having to buy an adapter cable.

•  Even your USB ports have evolved. The latest USB 3.0 ports are much faster than USB 2.0 and backwards compatible, and most laptops sold in the last couple of years have at least one USB 3.0 port. If you were fully informed, you’d be infuriated that your laptop likely also has some slow USB 2.0 ports – not because of any compatibility problem but because that way the manufacturer can save $1.50 or so during manufacturing. Because no one ever pointed that out to you, you’ve likely been getting slower performance from some USB 3.0 sticks and external drives because you accidentally plugged into the wrong USB port.

In other words, there’s nothing new about ports coming and going. If USB-C means you have to buy an adapter or two, luxuriate in a brief sigh of annoyance, then move along. It’s business as usual.

Finally, the takeaway for March 2015: this will be an important advance but it’s not a reason to delay buying something you need. Look for USB-C to begin to appear in the next few months, and perhaps even favor laptops with those ports when they appear, but it’s not a game-changer that turns the world on its head. Buy what you need, when you need it.