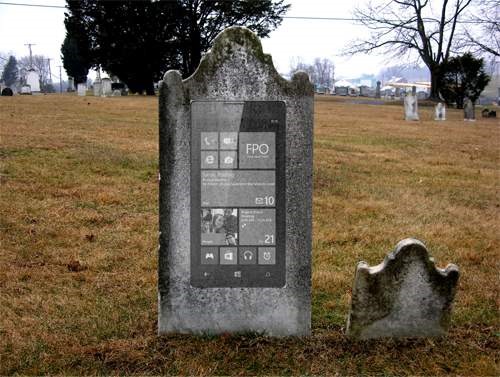 Last week Microsoft announced that it will lay off almost all of the remaining employees inherited from its purchase of Nokia, and write off $7.6 billion from the Nokia deal – more than it paid for Nokia last year. Although Microsoft will still develop the Windows Phone OS and there will still be a few Windows Phone devices released going forward, the announcement was a frank acknowledgement that Microsoft failed completely in its attempt to build a third phone operating system to compete with Android and iOS.

It’s not a surprise. The handwriting has been on the wall for quite a while. The timing of the announcement was unexpected and a bit odd, three weeks before Windows 10 is released; Windows developers are being encouraged to write “universal” Windows apps that can run on computers and phones, which isn’t as interesting a goal if there aren’t any Windows phones. There’s no good time to announce bad news and Microsoft CEO Satya Nadella apparently just wanted to get it over with.

This wasn’t preordained and the company does not need to feel ashamed about the failed effort. If there’s a lesson, it is that big bets do not always pay off. It’s worth remembering just how big a bet Microsoft made.

Microsoft was actually one of the earliest developers of an operating system for smartphones. Windows Mobile dates back to 2000 and had roots in Windows CE before that. In 2007 Windows Mobile was the most popular smartphone software in the US, but Apple unveiled the iPhone that summer and Windows Mobile was immediately forgotten. Microsoft rewrote its OS and released Windows Phone 7 in 2010, which sank without a trace. Two years later, Microsoft took its last, best shot with Windows Phone 8, a completely rewritten OS with an innovative interface and an attractive lineup of phones, and launched a huge marketing blitz to create a market for Windows Phone out of thin air.

Meanwhile the iPhone had also shaken the world of Nokia, which had been one of the most successful phone manufacturers in the world for many years prior to 2007. By 2010 the market had tilted so heavily in favor of smartphones that Nokia’s traditional business of making flip phones was clearly in a death spiral, and it was having trouble getting any traction in the smartphone market.

Nokia made its own big bet. It hired Microsoft exec Stephen Elop as CEO in 2010, and Elop spearheaded a pivot of the entire company in 2011 to become the near-exclusive manufacturer of Windows Phone devices worldwide. It was a bold but reasonable decision at the time. There was no other realistic option except to become another me-too manufacturer of Android phones and compete against giants like Samsung and Motorola.

Microsoft and Nokia bet that they could raise a third platform together to the point that it was competitive with iOS and Android. Windows Phone didn’t have to win; there would have been profits for all if it could have achieved a respectable market share and (perhaps more importantly) if developers believed they should deliver apps for Windows Phone as naturally as they did for iOS and Android.

By 2013 it was clear that the bets were not paying off. Microsoft poured marketing dollars into Windows Phone and pleaded with developers to show some pity, but the market steadily kept tilting to Android and iOS. Nokia’s market share continued to plummet and its stock value was down 85% by June 2013. Stephen Elop stepped down as Nokia CEO and returned to Microsoft, where he continued to work on improving and promoting Windows Phone.

Nokia had no backup plan; it was all-in on Windows Phone. Microsoft decided it was in the game too far to back down and increased its stake by buying Nokia’s entire smartphone business in April 2014 for more than six billion dollars – 25,000 employees, worldwide phone manufacturing factories, and even the Nokia name for a year. Although other manufacturers were able to license the Windows Phone operating system and use it on their own phones, few did. Microsoft has spent the last year trying one last time to boost the platform singlehandedly. It started giving away Windows Phone for free to other manufacturers. It released a blizzard of inexpensive Lumia phones all over the world, trying to kickstart high volume sales somewhere – anywhere.

Alas! Nothing has made anyone want a Windows Phone. Market share has dropped to the point that it is more or less a rounding error at the bottom of the charts. Stephen Elop left Microsoft in June. Last week Satya Nadella announced the layoffs and the write-off of the money spent to acquire Nokia.

To be clear, Microsoft will still make new Windows Phones. Ventures by big companies do not disappear overnight. Microsoft will announce new flagship phones, presumably with features that make them momentarily attractive. It promises to have a few new devices for business customers, enthusiasts, and the low end of the market. Later this year it will announce Windows 10 Mobile, a lightly overhauled version of Windows Phone 8.1. None of it will make any difference.

This is what Nadella said in corporate-speak: “We are moving from a strategy to grow a standalone phone business to a strategy to grow and create a vibrant Windows ecosystem that includes our first-party device family. In the near term, we will run a more effective phone portfolio . . . In the longer term, Microsoft devices will spark innovation, create new categories and generate opportunity for the Windows ecosystem more broadly.”

Translated: R.I.P. Windows Phone. It could have been a contender! It was a noble effort but it failed, and now it’s over but for the tailing off.