Ad Blocking Part 2: The Good, The Bad, And The Death Of The Internet 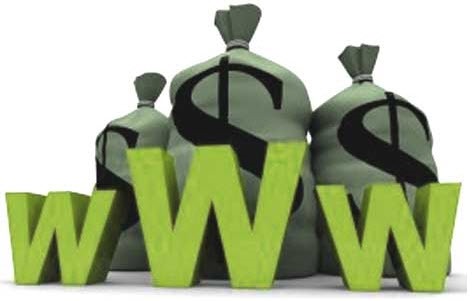 Previously – Ad Blocking Part 1: The Good, The Bad, And The Death Of The Internet

The Internet has to be paid for.

That’s the rest of the ad blocking debate in a nutshell.

When you use an ad blocker, you’re sending a message to advertisers and publishers: “Ads are now overly intrusive. They make our web browsing slower and more difficult, especially on phones, and they gather too much information about us.”

The response from publishers and advertisers is: “The businesses running the websites and the people writing the articles have to be paid. If they don’t make money, the content won’t be there. Advertising produces a revenue stream that’s enough for many sites to survive. Experiments with “paywalls,” where you’re asked to pay a small amount to get to content, have almost always been unsuccessful. You demand that we improve ads, but that requires more tracking, not less, so we can show you ads that are more likely to be interesting to you.”

Both sides are right. But there are actually three sides in this battle, because publishers and advertisers have different motivations.

The advertisers don’t care if you use an ad blocker. They only pay if their ads are viewed. If you don’t view an ad, they don’t pay.

Using an ad blocker, then, only hurts the website trying to make money by showing you an ad while you’re reading content on the site.

Big companies have the resources and leverage to negotiate ad deals directly with advertisers and get their content onto proprietary platforms.

Small and mid-sized websites are in the most danger. They exist because of the ad networks, which allowed them to build their businesses without the huge difficulty and expense of negotiating with advertisers individually. The business can focus on its editorial operation and put monetization in the background.

An article on The Awl about ad blocking put it this way: “What is not in dispute is that if ad-blocking becomes ubiquitous (and there’s nearly every reason to think that it will be!) it will be devastating for publications who derive much or all of their revenue from advertising—which comprises most of the professional publications on the internet.” The Awl says that approximately 75%-85% of its own revenue comes from advertising that could be blocked by ad blockers. That’s typical for many sites.

Nilay Patel, editor in chief at The Verge, says: “What you want is the content . . . Unfortunately, the ads pay for all that content, an uneasy compromise between the real cost of media production and the prices consumers are willing to pay that has existed since the first human scratched the first antelope on a wall somewhere. Media has always compromised user experience for advertising: that’s why magazine stories are abruptly continued on page 96, and why 30-minute sitcoms are really just 22 minutes long. Media companies put advertising in the path of your attention, and those interruptions are a valuable product. Your attention is a valuable product.”

Advertisers believe this is an ethical argument. When you look at a web page, or watch TV, or read a magazine, they argue that you have entered into a kind of social contract: you agree to look at the ads in exchange for reading the content for free. By that logic, when you block ads, it’s a kind of stealing.

Well-known programmer Marco Arment released Peace, an ad blocker for iOS 9, after writing a long article discussing the ethics of ad blocking. It immediately became the best-selling ad blocker (and one of the best-selling apps) for iPhones. After three days, Arment voluntarily removed it from the app store and explained that it just didn’t feel good because of the damage that ad blocking causes to websites that deserve the income from ads.

The standard response is that advertisers have created their problems with online ads by overreaching, and now the advertising industry must adapt and produce ads that are less intrusive and less invasive. Farhad Manjoo argued in the New York Times that ad blockers would ultimately benefit everyone:

“In the long run, there could be a hidden benefit to blocking ads for advertisers and publishers: Ad blockers could end up saving the ad industry from its worst excesses. If blocking becomes widespread, the ad industry will be pushed to produce ads that are simpler, less invasive and far more transparent about the way they’re handling our data — or risk getting blocked forever if they fail…For better ads tomorrow, block ads today.”

In the short term, there are two ways advertisers will change their ads in response to widespread ad blocking.

There will be an increase in native ads. These are ads that look identical to the other content on a website. Here’s a post that John Gruber was paid to put on his site Daring Fireball, for example: 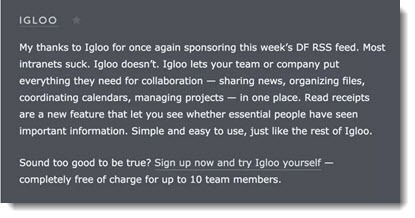 The other change under way will be a cat and mouse game between ad networks and ad blocking programs, similar to the battles ten years ago between bad guys and antivirus companies. Expect ads to start appearing on websites even though you’re running ad blocking software, as the ad networks find ways to mask the ads or construct web pages to defeat the ad blocking.

Obviously neither of those moves will improve our experiences with ads.

Ad Blocking Will Lead To The Death Of The Internet

A bit of hyperbole (borrowed from Nilay Patel’s article, discussed below), but there’s some truth there. Let’s step back and look at the bigger picture. 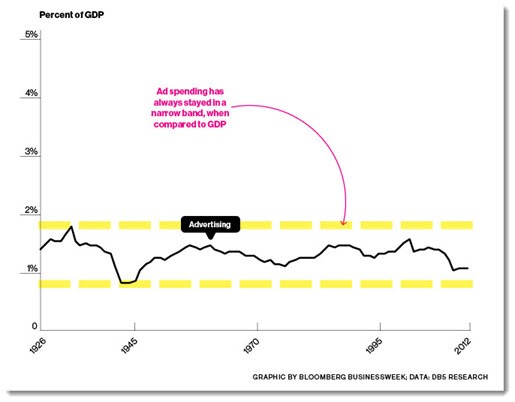 Spending on advertising as a percentage of GDP has been flat for almost a hundred years – always between 1%-2% of GDP. Advertisers shift spending around as media evolves (from newspaper to radio to TV to Internet), but spending more on advertising in one place means less will be spent somewhere else.

Google runs the dominant ad platform serving the web. A large percentage of the online ads that you see are delivered by Google. The ad networks are Google’s primary source of revenue.

Apple built ad blocking into is allowing ad blockers to run in Safari in iOS 9 as part of a brazen attempt to undermine Google’s ad platform. If iPhone users block ads in the phone’s web browser, then publishers will be under pressure to find a different, more effective place to put their ads. Apple is counting on the advertisers deciding that content ought to be delivered in apps, not on web pages.

If you install the Buzzfeed app instead of visiting the Buzzfeed website, for example, the ads in the app will not be blocked – and Apple will control the ad network that delivers the ads. In general businesses can deliver a better experience in a dedicated app than they can in a website, so Buzzfeed and the others can dangle inducements to get you to install their apps, and iOS 9 will include the apps in search results on an iPhone. It’s all about getting the ads into Apple’s ad network and out of Google’s ad network.

Apple also introduced Apple News as an alternative way for publishers to display articles in iOS 9 instead of putting them on a website, and of course ads can’t be blocked on Apple News.

Make no mistake: Apple and Google are locked in a high-stakes battle for your attention, and for the ad dollars that go with it. Remember, advertisers will not spend more overall; they will shift their ad spending to the platform they think will be most successful. The publishers will follow the ad revenue because that’s the only way they have to finance their businesses. Apple has tilted the playing field to encourage publishers and advertisers to put their content into apps instead of on websites. 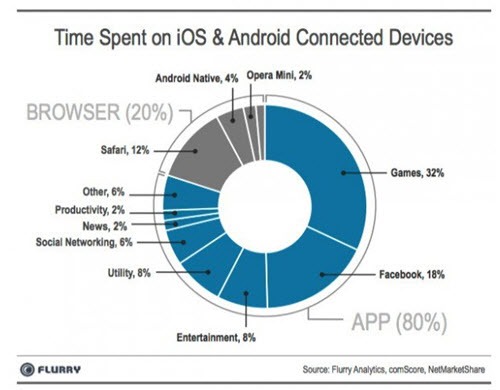 But there’s another combatant. Facebook is the most popular smartphone app in the US by a large margin. A huge percentage of website traffic now comes from links in Facebook feeds on mobile devices. Look at the chart above – we already spend as much time in Facebook as we do in web browsers on mobile devices. According to this study, Facebook was the starting point for a quarter of all website traffic to publisher sites in 2014. We are clicking on a lot of links in Facebook.

Snapchat is on the same path and has set up Snapchat Discover channels published by CNN, ESPN, Mashable and others that you read in the Snapchat app instead of being sent out to the web.

Nilay Patel wrote an insightful article about what lies ahead: “Welcome to Hell: Apple vs. Google vs. Facebook And The Slow Death Of The Web.” From his article:

“So it’s Apple vs. Google vs. Facebook, all with their own revenue platforms. Google has the web, Facebook has its app, and Apple has the iPhone. This is the newest and biggest war in tech going today.

“And the collateral damage of that war — of Apple going after Google’s revenue platform — is going to include the web, and in particular any small publisher on the web that can’t invest in proprietary platform distribution, native advertising, and the type of media wining-and-dining it takes to secure favorable distribution deals on proprietary platforms. It is going to be a bloodbath of independent media.”

Some small but respected websites have already closed their doors this year – GigaOm, for example. Large media companies can afford to adapt their content to new platforms, but what happens to small publishers that are only surviving because of ad networks? Patel’s conclusion:

“What happens to a small company when you take away 75 to 85 percent of its revenue opportunities in the name of user experience? Who’s going to make all that content we love so much, and what will it look like if it only makes money on proprietary platforms?

“These are the questions worth asking — and they deserve better answers than simply ‘they’ll adapt.’ Because there’s only one thing that makes adaptation such a powerful force.

So go ahead. Be selfish. Use an ad blocker. Enjoy your faster page loading and less irritating web pages. Just keep in mind that you’re killing the web, or at least making life more difficult for the small and medium size websites that make the web interesting. Honestly, I don’t know how you sleep at night.

Me? Oh, I use uBlock Origin. I may be ethical, but I’m not crazy.

(Edited 09/24/2015 to clarify that Apple is allowing third parties to make ad blockers that will run in iOS 9. It’s not blocking ads itself.)