Ad Blocking: The Good, The Bad, And The Death Of The Internet

Ads on websites are out of control. An online debate has been raging all week about ad blocking – programs that run on your computer or your phone to remove ads from web pages so they load faster and you have fewer distractions. I’ll try to tell you briefly why it’s such a contentious issue, and why the consequences of a battle among Google, Apple and Facebook may change the shape of the web for all of us.

In this article: background info about ad blocking, some suggestions if you want to try it on your own computer, and stories that will make you mad about the way advertising has mucked up the modern web.

In the next article: a look from the perspective of advertisers and publishers (this isn’t as straightforward as it looks), and a peek behind the scenes at the real stakes.

What is ad blocking?

You can install an app or a browser extension to stop advertisements from appearing on websites. At one time ad blocking was a little known option mostly used by technology buffs but it is quickly moving into the mainstream. 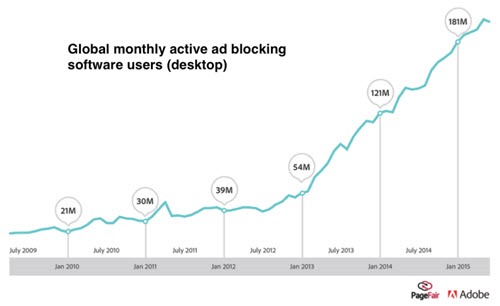 In a sense, you’ve already been using ad blocking for years. That was the original purpose of pop-up blockers, after everyone became frustrated by pop-up ads that would open new browser windows automatically when we visited websites. Now pop-up blocking is built into modern browsers and the advertisers have moved to different kinds of ads.

There are dozens of ad blocking programs for Windows computers, each with different features, each with true believers. They’re free and if you’re lucky, they run invisibly and do not cause problems. I’ve used several ad blockers in the last year and have had no issues.

The debate last week began when Apple released iOS 9 for iPhones/iPads and for the first time permitted ad blockers to work on iOS and to be sold in the app store. Ad blockers like Crystal, Purify and Blockr immediately became top selling iOS apps.

Why do people use ad blockers?

The Verge is one of the best sites for technology news and analysis. Let’s use it as an example.

LMOrchard analyzed what happened when his browser opened a Verge article in July. Before it was done displaying a 1600-word article with a couple of pictures, it had downloaded almost 10Mb of data. All of the words in the article add up to about 1/1000th of that amount of data! When a reader complained on Twitter about bloated pages from the Verge’s mobile site, Nilay Patel (Verge editor-in-chief) conceded that advertising was responsible for much of the rest of the loads. 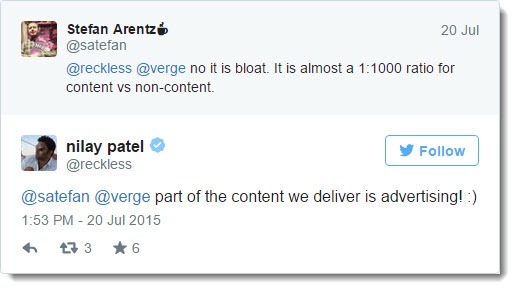 Even more distressing, the browser loading that Verge page sent data to over 20 different companies that assemble tracking information and handle advertising. That’s how decisions are made about what ads will be displayed to you, and that’s how the advertisers get data about you: what pages you visit, what you click on, how long you stay on the page. They don’t know your name but you or your computer have many identifying characteristics and the same companies are also gathering that information from other sites you visit.

The effect is that the web is a mess. Pages are taking longer to load and page crashes are more frequent. The Verge is just an example; almost every website that delivers content is financed by advertising. You could do the same analysis of CNN, CNet, Huffington Post, Forbes, or almost any other site you visit to read or watch content online; the details might be different but the underlying concept is the same. Every site you visit that does any kind of journalism, every source of news, everything that is “free” and isn’t selling you something is serving up web pages that are connected to ad networks that are downloading ads and delivering data back about your browsing. It is the ad networks behind the scenes that are responsible for the ads that follow you around – look for raincoats on one site and you’re likely to see ads for raincoats on every other site until you want to scream.

More recently, advertisers have been loading up the mobile versions of websites with more and more ads, slowing down web browsing on phones as well. Even worse, an ad on a phone is more likely to cover the screen, making each ad more intrusive. Phones are more likely to have limited data plans which are being used up when ads are downloaded, and the scripts running behind the scenes on websites can drain phone batteries.

The ad blockers stop ads from downloading, and stop the trackers from uploading information about you. Not all ad blockers are identical. Adblock Plus, a popular choice, raises money by letting “respectable” advertisers pay to be on a whitelist so their ads still appear, for example. But in general you’ll likely find that web pages start to fly when you have an ad blocker running. This article has a number of visual comparisons of pages loading on phones with and without an ad blocker running. The differences are significant.

Expect some side effects. Some websites don’t display correctly when the ads are suppressed so you might have empty white space or jumbled page elements. Most of the ad blockers will let you turn off the blocking for a particular page or a specific domain if that helps put things right.

It seems obvious, doesn’t it? And from our perspective as consumers being harmed, maybe it is. It only takes a minute to install an ad blocker and you are immediately rewarded with faster, cleaner web pages.

There’s another side with some ethical questions to ask yourself, and a bigger picture about the future of the web. We’ll talk about that in the next article.