Microsoft Is Not Playing Nicely With Your Internet Connection 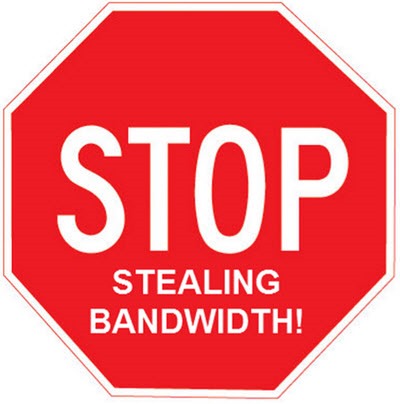 The tech press has been full of manufactured outrage and clickbait headlines about supposed invasions of privacy built into Windows 10 by a wicked Microsoft. Most of it falls apart on close examination and turns out to be mundane and uninteresting – I can’t find the energy to be upset that Microsoft collects anonymous information about the way you use Windows to improve it and fix bugs, for example.

But Microsoft’s eagerness to push Windows 10 upgrades is causing it to use poor judgment. It’s not invading your privacy but it might be using your bandwidth inappropriately: first, by downloading gigabytes of Windows 10 setup files to your computer in the background, even if you haven’t requested them or don’t plan to upgrade; and second, by uploading Windows 10 setup files and updates to other computers without asking permission.

You don’t have to do anything. Don’t panic. There’s one setting you should change after upgrading to Windows 10, but otherwise relax. This is just news, not a crisis.

A few days ago, The Inquirer reported that Windows 7 users were discovering a hidden folder named $Windows.~BT with 3.5-6Gb of setup files for Windows 10. The curious part was that they were discovered on machines that had NOT opted in to “reserve” a copy of Windows 10 with the intrusive icon in the lower right corner of the taskbar.

When asked, Microsoft confirmed that it was doing this on purpose. Its statement in full: “For individuals who have chosen to receive automatic updates through Windows Update, we help upgradable devices get ready for Windows 10 by downloading the files they’ll need if they decide to upgrade. When the upgrade is ready, the customer will be prompted to install Windows 10 on the device.”

It’s part of the functionality built into KB3035583, the update that created the annoying upgrade icon in the first place. The update was released through the Automatic Update system and was marked as “Important,” which means it was installed automatically as part of a routine Patch Tuesday update several months ago.

It wasn’t understood until Microsoft’s statement last week that the update also downloads the Windows 10 update files and stores them in the hidden folder just in case you decide to upgrade some day. Microsoft acknowledged that it does that for “individuals who have chosen to receive automatic updates through Windows Update” – which is everyone, at Microsoft’s urging and as a best practice to stay secure.

But it means the button to “reserve” a copy of Windows 10 must be completely meaningless. It doesn’t seem to make any difference whether that button was pushed or not, as the Windows 10 update files are downloaded regardless.

You probably don’t have any reason to worry about this but it reflects poor judgment and miserable communication by Microsoft. And it can have harmful effects in at least some cases: there are people with very small hard drives who are upset that the update files are using precious storage space; and there are people with limited bandwidth who are upset that their connection is slowed down by the download. In the worst cases, the download has used up the available bandwidth for people on metered connections.

This one doesn’t make any sense. If you push the “Reserve” button, you should get the upgrade files in the background. If you don’t push the button, you shouldn’t get the files. The upgrade icon and notices already made Microsoft look overeager, but downloading the files for people who haven’t asked for them crosses the line and makes Microsoft look deceptive and sneaky.

After you install Windows 10, your computer begins uploading Windows 10 setup files to other computers on the Internet using technology that closely resembles BitTorrent. “Windows Update Delivery Optimization” turns your computer into part of a peer-to-peer network delivering updates to others. Like torrents, many computers contribute small portions of the updates and the receiving computers assemble them into their final form. It’s anonymous and secure.

It’s also using your Internet connection to help Microsoft by reducing the load on its servers. You weren’t asked about this. It’s turned on by default in Windows 10 Home and Pro, and the setting to turn it off is deeply hidden. It’s not limited to Windows 10 upgrade files; Microsoft will continue using your connection in the future to distribute future updates and apps from the Windows Store.

Microsoft has no business using your upstream bandwidth without your knowledge for something that does not benefit you. If you have lots of bandwidth and choose to help out a worthy cause, that’s great! The worthy cause might be helping Microsoft keep computers up to date, or it might be the search for extraterrestrial intelligence. The choice ought to be yours. 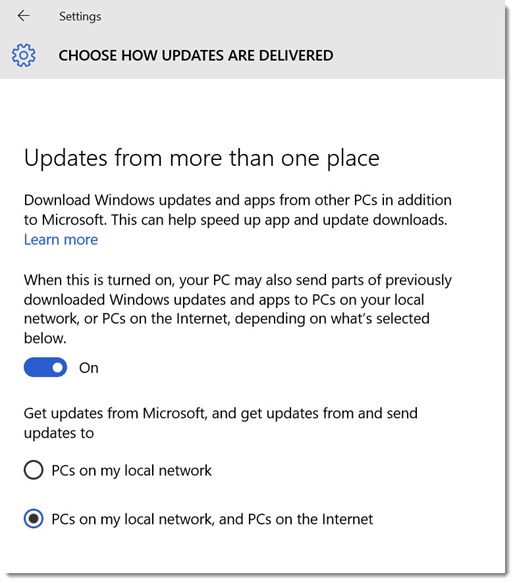 I’d suggest limiting the uploads to PCs on your local network, or turning this feature off altogether. Go to Start / Settings / Update & Security / Windows Update and select Advanced Options. Use the toggle to turn Delivery Optimization off. You’ll still get updates and apps from Microsoft normally.

This isn’t a crisis and it doesn’t invade your privacy. It’s just another example of the importance of the setting chosen as the default for an operating system feature. If this was turned off by default and Microsoft encouraged you to turn it on as an act of good will, they would deserve congratulations for ingenuity. Instead they look devious.