Office 2016 Is Now Available! Well, For Some Of You, Anyway 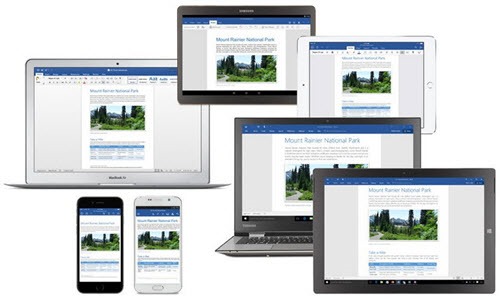 The new version of Office 2016 for Windows is now generally available.

•  Most of you will get it automatically.

Microsoft has completely lost control of branding and licensing. There is no way to explain any of this without getting hopelessly tied up in knots. I’m brave and foolish and I’m going to take a crack at it, but don’t blame me if your eyes glaze over.

Get some coffee. You’ll need it.

What is Microsoft Office?

In 1988, Microsoft announced the release of Office, a bundle of programs that contained Word, Excel and PowerPoint. Easy so far, right?

For more than twenty years, Office continued to be a bundle of programs, but the number of programs included under the Office name increased fast, adding Outlook, Publisher, OneNote, Access, and more. Grouping the programs into different combinations meant the number of bundles multiplied – most recently the choices of Office suites on store shelves included Home & Student, Home & Business, Standard, Professional, and Professional Plus.

Office has always been more than the core programs. Wikipedia lists 20 additional programs and services that have been included at various times under the “Office” umbrella and discontinued.

Today Microsoft Office is an enormous collection of programs, servers, and online services. Versions of the core programs are available on every computing platform known to man but they’re only the tip of the iceberg for what is referred to as “Office” in 2015. In addition to the installed programs, there are online versions of the core programs; mobile versions of the core programs for iOS and Android phones and tablets; new services like Office Sway, a tool for quickly creating polished web presentations; Skype for Business, not really Skype but a rebranded version of Lync; Planner, an upcoming project management portal; and Office Delve, an online tool for surfacing information in a company portal.

In 2011 Microsoft launched Office 365, which only tangentially related to the name “Office” as it had been used until then. Office 365 started as a group of services for business that included email and Sharepoint as well as licenses for the Office programs.

Then in 2013 the branding confusion got exponentially worse when Microsoft decided also to use Office 365 as the marketing term for consumers to buy subscription licenses for the Office programs. “Office 365” cannot be used safely to refer to a business account any more. It was a disastrous branding decision. One of the most popular Bruceb News articles attempts to describe the difference between a Microsoft account and an Office 365 account, a distinction that continues to bring strong people to tears.

You used to get a license for the Office programs with a new computer, or in a box at Best Buy. It was expensive and no one enjoyed keeping track of the license code but at least you could understand the concept.

You can still buy a license with a new computer or in a box, but they’re bad investments compared to the subscriptions. A $99 Office 365 Home subscription, for example, includes a license for the core Office programs that can be used on up to five computers along with licenses to use the mobile versions of the Office programs on tablets and phones, plus unlimited online file storage in OneDrive and 60 minutes/month of Skype calls to mobile phones and landlines. The subscriptions are much better options than paying one-time license fees for a non-upgradeable, non-transferable license for a single PC.

Referring to a “new version of Office,” then, requires some careful attention to detail.

What’s in the new version of Office?

The Windows versions follow the Mac versions of the Office 2016 programs by a few months.

If you’ve been using Office 2013, the differences will be pretty trivial for most of you.

Each program gets a color-coded top bar. The shading on the ribbon is easier on the eyes. The headings on each tab are now in mixed upper case/lower case. In this comparison, Office 2013 is on top, Office 2016 is on the bottom. 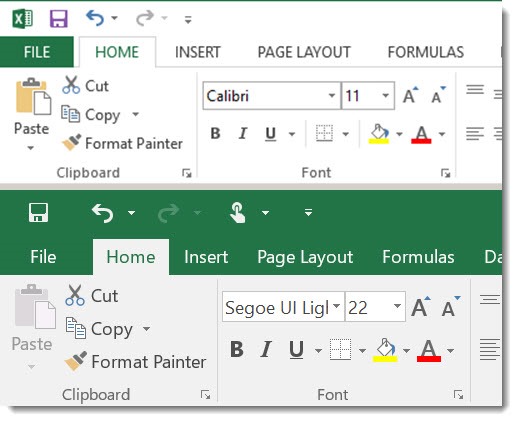 There is a new help system labeled “Tell me what you want to do.” It takes any kind of input (“how do I insert a table?” or just “insert table”) and provides information, but it’s better than traditional help because it also includes links to start what it’s describing, instead of making you go hunt for things in the ribbons.

There are some new charts in Excel.

Okay, great. A little light on excitement. Anything else?

Microsoft’s focus was on adding features for better collaboration. The most eye-opening feature allows two people to work simultaneously in the same document in Word on different computers, with real-time updates for what the other person is doing and smart implementation so the two of you don’t collide with each other. Google has offered this in Google Docs for documents edited online for some time. It turns out Microsoft also has offered this in Word Online for some time, but businesses are slow to change and I haven’t seen much adoption of Word Online. Bringing co-authoring down to the desktop makes sense but requires that files be stored in OneDrive or OneDrive for Business, which aren’t good solutions for small businesses.

To be honest, that’s about it. Paul Thurrott’s review has more details. Office 2016 is not exactly a huge step from Office 2013.

To be clear, though: if you’ve been using Office 2010, you’ll find many small changes that make the programs better and easier to use. Office 2010 users should strongly consider upgrading.

How do you get the new version of Office?

If you bought Office with your computer, or if you bought a boxed copy of Office, you don’t get a free upgrade. You have to go buy a subscription. Here’s a guide to buying Microsoft Office.

Here’s an example of the kind of thing that makes me irritable on your behalf.

When Office 2016 was released, I logged into my Office 365 business webmail and clicked on the gear in the upper right, then Office 365 Settings / Software, which is where you can download Office if your business subscription includes it.

The first thing you need to know, then, is that Microsoft is downplaying the name “Office 2016” for Office 365 subscribers, both consumer and business. Sometimes it appears in the small print, sometimes the programs are referred to as “Office” without any date.

This will make sense in the future when we are all subscribers and the programs are regularly updated without major new versions. At the moment it’s just annoying.

If you have an Office 365 subscription and you are currently using Office 2013, Microsoft will be delivering Office 2016 through the Automatic Update system at some point. Most Office 2013 users should simply wait and get the upgrade automatically.

The options for everyone else have to be thought through individually. This article goes through all the possibilities – upgrades from Office 2010, manual upgrades, or buying a new subscription. I’ll be standing by if you want to sort it out.

Here’s one more example of Microsoft making this unreasonably complicated. There are multiple ways to buy Office 365 business licenses for Office. One of them – a separate license for “Office ProPlus,” a version of the suite that includes Access – will not be getting the Office 2016 upgrade until sometime next year. Some of my clients have a mixture of Office licenses through Office 365 and soon will be in a position where some employees get the new version and the others have to wait for months. Why? (Shaking head.)

It ought to tell you something that Microsoft had to put together quite a long web page with dozens of screenshots just to help you figure out what version of Office you have.

Office 2016 is recommended. It will be a particularly good upgrade for Office 2010 users. Getting the upgrade may be a bit of a puzzle, which I’ll be happy to help you solve.

Everyone should be obtaining Office through Office 365 subscriptions; if your business does not have an Office 365 account yet, let me help you get started. Do not buy Office from a computer manufacturer when you buy a new PC and don’t buy a boxed copy! They’re bad investments.