OneDrive Update: Easier Setup In Windows 10, Plus The Mystery Of OneDrive For Business

Let’s get caught up on the latest news about OneDrive, Microsoft’s service for storing files online and syncing them to your computers and mobile devices.

If you’re new to OneDrive, it’s a free service tied to your Microsoft account that’s similar to Dropbox. It creates a magic set of folders on your computer that are synced online and available on any device linked to the Microsoft account. It’s deeply built into Windows 10, so you’ll see OneDrive if you upgrade to Windows 10 whether you ask for it or not.

New for Windows 10: easily set OneDrive as the default location for documents and pictures 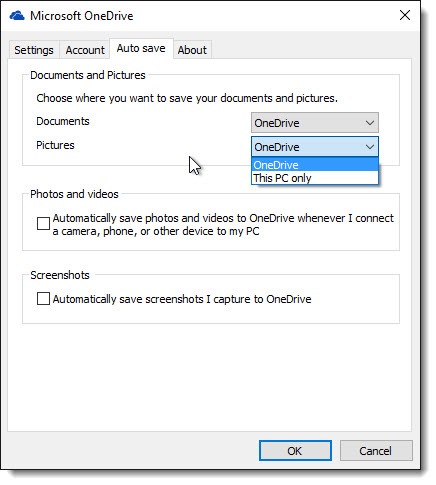 Microsoft has finally made it easier to use OneDrive as the default location for your documents and pictures. As long as you have enough OneDrive storage space, use it! Your files will be stored in the OneDrive folder on your computer AND stored online on Microsoft servers and linked to your Microsoft account. If you get a new computer or connect a laptop to that OneDrive account, the files will appear with no fuss. Your files will be secure as long as you have a strong password for your Microsoft account.

Your Documents and Pictures folders are the ones that appear in File Explorer when you click on “This PC,” as well as appearing on the Start menu under “Personal Folders.” Think of them as shortcuts to the “real” folders. This tip will change where those shortcuts take you.

In Windows 7 and 8, there was no easy way to link OneDrive with your Documents and Pictures folders. It can be done but the process is a bit messy. This article has the step-by-step instructions. The result is that many people have two Documents folders and two Pictures folders, one in OneDrive, the other in the user folders on their hard drive.

Windows 10 has a deeply buried setting that allows you to use OneDrive for your Documents and Pictures folders with a single click. You won’t have to do anything different, just save files in Documents and Pictures like you do now, but the files will actually be in OneDrive, ready to be viewed on your phone or laptop or home computer.

This tip is only for Windows 10. Look for the OneDrive icon in the lower right. Right-click the icon and click on Settings, then click the Auto save tab. You can choose OneDrive or This PC Only for your documents and pictures, as shown in the picture above. Switching to OneDrive only takes a click on the OK button. Nothing will look different afterward but when you click on “Documents” and “Pictures” in File Explorer, you’ll see the OneDrive folder, not the folder on the hard drive under \Users\(yourname).

Make sure you don’t run out of space on OneDrive. Log into your Microsoft account at www.onedrive.com. Your available OneDrive storage space will be shown in the lower left corner. Don’t put so much into OneDrive that you run out of space! If you need it, you can buy more space by clicking on “Get more storage” below your available space, or better yet by buying a subscription to Office 365 Home for $99/year. The subscription includes 1Tb of OneDrive space along with the license to install the Microsoft Office programs on up to five computers.

OneDrive For Business Is Still A Mess

OneDrive For Business is separate from OneDrive. It’s a different service with different login credentials that stores files in a different way behind the scenes. I’d like to feel sorry for Microsoft but they create this kind of confusion all the time. See, there are Office 365 services for businesses but they’re not the same as Office 365 subscriptions for individuals and home users – oh, never mind. Just trust me, OneDrive For Business isn’t the same thing as OneDrive.

OneDrive For Business is a mess. The program that syncs files is buggy and there are odd limits on the number of files that can be synced. Not to mention that the service is poorly understood: it’s designed from the ground up for individuals, not for companies that want to set up shared folders that hold all the company documents. That’s the key difference between OneDrive For Business and Dropbox, on the one hand, and Box.com on the other hand, which is designed for groups.

In May, Microsoft announced that it intends to completely overhaul the sync client for OneDrive For Business. The goal is a single sync program that runs both OneDrive and OneDrive For Business, with identical smooth syncing and the same tools for selectively choosing the folders to sync. Great! It would have been a swell feature in Windows 10, but it didn’t make it into Windows 10. So it would have been a great addition to the Windows 10 November Update, but it didn’t make it into the update.

At the end of September, Microsoft finally began slowly rolling out a preview version of the improved sync client. At one time Microsoft said it would be generally available by the end of the year but there has been dead silence from Microsoft since then. Maybe they’ll get something out. I don’t have much confidence that it will make OneDrive For Business into a contender for widespread business use. I haven’t seen any feedback from happy testers. Maybe they’re under NDAs and can’t wait to share their joy, but, well, I’m skeptical.

Yesterday, for example, a Microsoft moderator confirmed that OneDrive For Business cannot sync shared files (one of the horrible shortcomings for businesses), and did not make it sound like that’s going to change in three weeks. Here’s the Microsoft moderator:

“Unfortunately at present the Shared with Me folder cannot be synced locally as its not really a folder but a view on search results.

“One of the top requests on the user voice site is the ability to sync shared folders.

To be clear, “team site document libraries” are more accurately described as “something your company is not using.” Small businesses don’t need a workaround; they need a way to sync shared documents.

Keep your eyes on this one. OneDrive For Business is an embarrassing failure for Microsoft and they’re already way overdue to improve it. More delays will create more opportunities for Dropbox and Box to thrive.