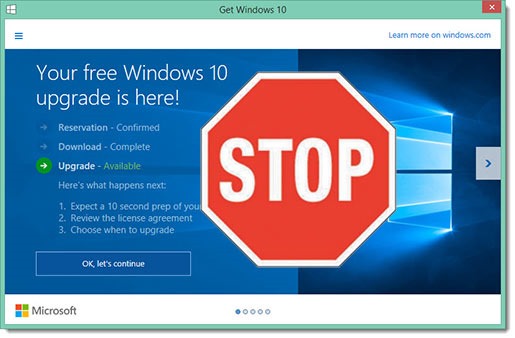 Microsoft Chief Marketing Officer Chris Capossela sat down for a remarkably frank interview on the Windows Weekly podcast a few days ago. One of the topics was the insistent push that Microsoft is making to drive Windows 10 upgrades – notices when you start your computer, notices popping up from the lower right corner, notices that do not have any obvious Cancel button (“Choose the time for your upgrade: [] Now  [] Tonight”). Sometime in the first quarter Microsoft is likely to turn up the heat even higher by moving it higher in the Windows Update lineup.

Capossela acknowledged that Microsoft is taking flak for pushing so hard, but he also made an interesting argument for the way the company is handling the process. Basically, the company believes almost everyone will be well served if they upgrade. Users (you and I) will be working on a platform that is more secure and more compatible. Manufacturers will be able to make better equipment and peripherals if they are assured that all computers are running identical copies of Windows that have all received the same updates and patches. Microsoft will be able to improve its processes for adding features and keeping computers up to date if everyone is on the same version of Windows. And if Windows 10 is a strong platform, then it will attract developers that right now might be devoting all their attention to mobile devices. Fragmentation is a problem with all platforms; Android developers are hamstrung by the large number of different Android versions on people’s phones, and Windows developers have a wide range of Windows versions to contend with.

It is worth remembering that Microsoft is giving away Windows 10 for free. That is a huge change in one of the core businesses of the company and it demonstrates the seriousness of the commitment to delivering “Windows As A Service,” a continually developing platform that sits in the background and evolves over time.

That’s why it makes sense for Capossela to say that Microsoft is willing to take the heat if some people are upset by the pushiness of the Windows 10 upgrade notices. There is little that can be accomplished these days without angering someone and the company thinks the long-term rewards are worth it for everyone. It’s hard to argue that Microsoft is being selfish for its expensive efforts to give something away.

It’s interesting to see Microsoft’s side, but it still can’t be forgiven for what can only be described as a particularly annoying bit of adware. You should have the option to decline the upgrade permanently. You should be able to say: “I’ve thought about it. I’ve weighed my options carefully. I’m fully informed. This computer will never be upgraded to Windows 10 during its lifetime. Stop telling me about it!” Perhaps that option will appear someday.  Today it’s up to you to turn off the notices if you’ve made your decision and you don’t want to see any more upgrade reminders on a computer you’re using.

Remember my general advice. After you do a backup and check line-of-business programs for compatibility, then:

•  Consider not upgrading Windows 7 computers, especially if they’re four years old or more. There is some risk that the upgrade will be disruptive, at least requiring a few hours of fussing with devices that don’t work or settings that change, and the rewards are modest. Everyone has a different tolerance for dealing with computer problems and the upgrade may not be worth it if you will resent your first Windows 10 experiences on a computer that  you’ll likely replace soon anyway.

I wrote instructions here about the steps to remove the Windows updates manually that are responsible for the upgrade notices. It’s a fairly annoying process. No surprise, then, that a number of people have cooked up little programs whose only purpose is to automate that process. The best-known is GWX Control Panel, a free utility that removes the Windows 10 upgrade notices.

OBLIGATORY SAFETY WARNING: I have not used GWX Control Panel. I believe it to be safe based on online feedback; the installer does not trigger any warnings from antivirus programs. Don’t get in the habit of downloading programs from unknown third parties – that’s a good way to kill good computers and make me rich. But we can make an exception in this case, just this once. 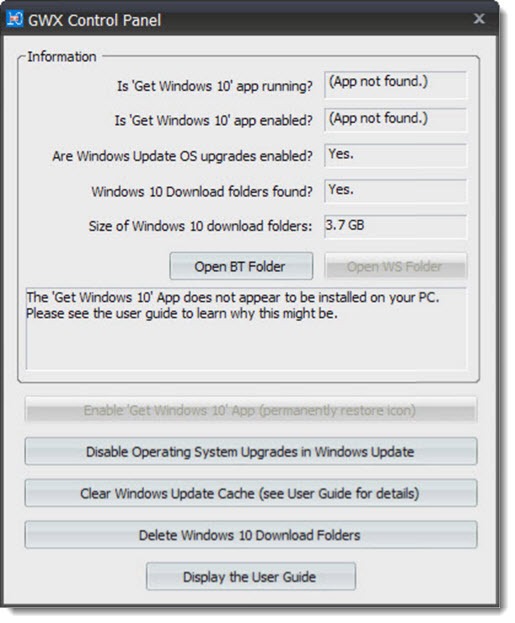 GWX Control Panel turns off the operating system upgrade prompts with a single click. It also can optionally remove downloaded Windows 10 install files that might be hogging space on your hard drive. Feel free to use it if you don’t intend to upgrade a computer to Windows 10. It might help you relax when you start your computer in the morning.