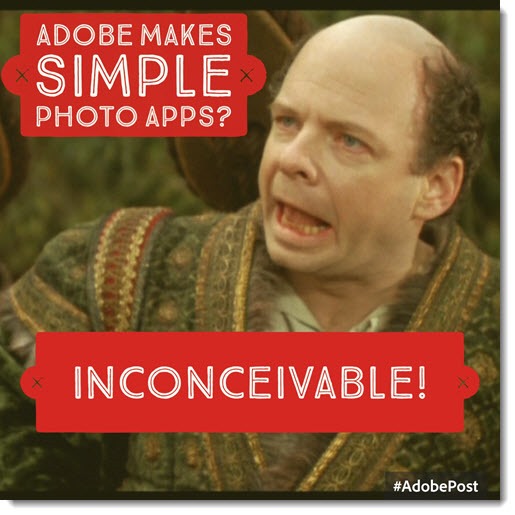 We are awash in photos. Our phones take better photos every year, and it’s so easy now to snap a dozen pictures where we would have taken one in the past, trying to get a picture with everyone’s eyes open. The selfies and landscapes, the pictures of food and loved ones and dogs and cats, all of them are accumulating in our Camera Roll and Pictures folders by the hundreds and thousands.

If you’re under thirty, this isn’t a problem. Fifteen seconds with Instagram for this picture, toss that one onto Facebook, and let the rest of them pile up. The generation growing up with unlimited file storage and computers in their pockets has a different attitude toward digital debris than us old folks.

If you’re over thirty, those piles of images look messy. Sure, you have the option to look away, like ignoring a closet that really should be cleaned up, but still I hear from people all the time about their plans to go through the photos someday and sort them out, get rid of the duplicates and the bad pictures, maybe improve the best ones and share them with friends.

That’s not easy to do! Going through photos is hard work. Photography professionals use Adobe Lightroom to sort through their photos, and creative professionals use Adobe Photoshop to turn photos into works of art. Both programs are fiercely complicated. I’ve probably spent fifty or sixty hours learning Adobe Photoshop over the years and I have barely scratched the surface. I have to look up the most basic functions. There is no way for normal people to use Photoshop or Lightroom. The programs will turn you into raving lunatics. Adobe has long had a simplified version of the programs, Photoshop Elements, which squishes Photoshop and Lightroom into a single program, but it’s not simplified enough for most people to use it successfully.

A lot of people use Microsoft Photo Gallery on their computer. It’s still a good choice but it’s now almost four years old and Microsoft gives no indication that it will be updated again. Microsoft is focused on the Photos apps released with Windows 8 and Windows 10 which are . . . okay. Microsoft has trouble finding the right balance of simplicity and power. The Photos app in Windows 10 is very, very simple, to the point that it doesn’t do much of anything.

Besides, most of us are staring at our phones more than we’re sitting at a computer. It’s become easier to edit a photo on your phone than on a computer, which is a bit odd. Everyone has become an expert in flicking through photos at the speed of light and the phone apps for editing are better designed and easier to figure out.

You may already have your favorite apps. Google Photos is invaluable for archiving and searching for photos. It has rudimentary editing tools, although that’s frequently enough. Snapseed is a marvel. It’s a free app, now owned by Google, for iOS and Android phones and tablets. Snapseed is a photo-editing app that you can use to crop and enhance pictures easily and quickly. It took only a minute to learn how the controls worked. A couple of clicks and swipes are all it takes to change lighting, apply filters for special effects, add lens blur, and much more. Changes can be written to the original file or saved to a new file, and can be shared by email or on Facebook or Twitter with another click. It has enough options to be a bit daunting – nothing like the complexity of Photoshop but still perhaps more than you want for your casual snapshots.

Adobe has stepped into the fray with two photo apps that might become your new best friends. Adobe Photoshop Express and Adobe Post are free, they’re simple to learn and to use, and each has a particular place that might be useful for you. 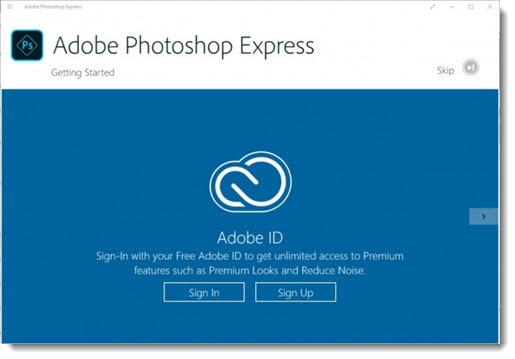 Adobe Photoshop Express is available on iOS and Android – and for Windows 10, so you can use it on your upgraded computer. It does not help you browse through your pictures but it can help you crop and edit individual photos. To my eye, it strikes the right balance of power and simplicity, with a nicely chosen set of controls for basic editing but nothing overwhelming. All these programs sound alike when the features are described (brightness, crop, auto-fix, filters, borders, share to Facebook, highlights, shadows, lions and tigers and bears). What’s important is how you react when you use it – is it too much, too little, or is this the Cinderella of photo programs for you that has just enough? Try it.

There is one quirk that Adobe has inserted very deliberately in the Windows 10 app. Like all software manufacturers, Adobe very much wants you to have an Adobe ID – login credentials (email address and password) that connect all the Adobe services together for you. Once you have an Adobe ID, Adobe can try to sell you various subscriptions and add-ons. Adobe Photoshop Express is free on Windows computers and does not require an Adobe ID – but if you sign in with an Adobe ID, you will unlock “premium features.” You’ll get some extra filters plus nifty tools for noise reduction and defogging for free, if you’ll just sign into Adobe’s world. Absolutely, get your Adobe ID sorted out and sign in for the bonus if you’re using Adobe Photoshop Express on a Windows 10 computer.

Just before Xmas, Adobe released a new app for iOS, Adobe Post. (No word yet on an Android version – iPhone only for now.) Adobe Post is specifically devoted to creating photos with text that can be shared on Facebook, Instagram, and Twitter. With a click, Adobe Post applies a combination of a photo filter, typography, layout and colors, making your image into something that looks like a professional designer worked on it. Small businesses might be the best audience – you’re trying to put creative things online but you don’t have time to create something beautiful from scratch every day. Adobe Post makes it easy.

Adobe Post makes it easy to get started. There are a few dozen pre-made templates to look through, sorted into categories and built with public domain photos. If you like, you can just change the words and have a fine project. But you can switch to a different design with a single click, or change the photo with a quick search, and apply filters with complete freedom. Photos can be drawn from a variety of sources: your photo collection; public domain photos; or your Creative Cloud library, if you’ve signed in with your Adobe ID (there it is again) and if you have a Creative Cloud library, which you don’t. Projects are automatically saved to your camera roll. Of course, it takes only a click to share your creation on Facebook, Instagram, or Twitter.

First, the projects are always sized at 1200x1200px. That’s a fine size, suitable for sharing without being too big. Just be aware that there’s no flexibility in the image size or orientation – it’s always square.

Second, Adobe Post will insert a watermark at the bottom right of each project. You’ll see it in the picture at the top (which took all of 90 seconds to create with Adobe Post once I found the right picture of Vizzini). You can remove the watermark in all your projects by tapping once on the watermark while you’re working on a project in Adobe Post. A window will open up demanding that you share a complimentary note about the program on social media or by email. Send it by email once to an alternate email address for yourself or someone friendly. The watermark will then be removed from all your projects forever. Odd, and not exactly obvious, but it’s a relatively small problem once you know how to get rid of it.

Here’s a review of Adobe Post. Give it a try if you have an iPhone. You might start to add text to your photos, just because you can.