The Decline Of Internet Explorer 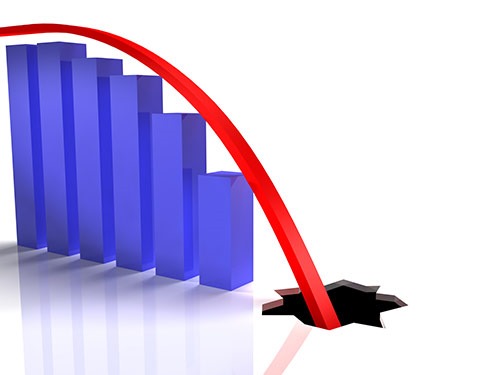 Market share for Internet Explorer is going down fast. Google Chrome is the Internet browser being chosen by more people every year. If you’re an Internet Explorer user, you’re not required to switch! This is an interesting trend, not an emergency. Nonetheless, I recommend having Chrome installed on every Windows computer, either as the default browser or as the fallback for websites that Internet Explorer does not handle properly. There are more of those every day.

But everything changed in 2007, when Apple released the iPhone, and 2008, when Google released Chrome. The mobile revolution has had repercussions that have turned the technology industry on its head and changed our world. Internet Explorer is one of the victims of that revolution. It went into a tailspin as our habits changed in so many ways. The chart below, with usage share from 2009-2015, will give you the idea. 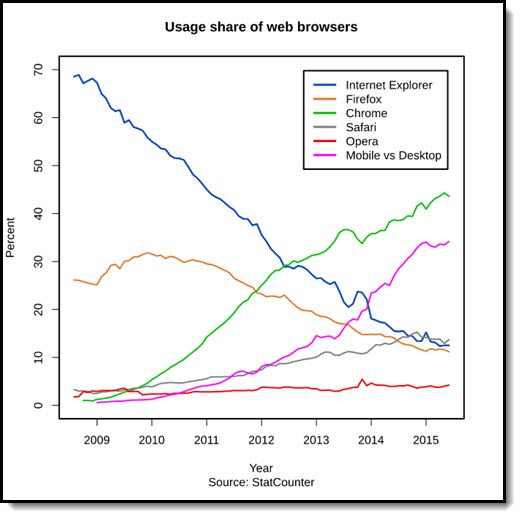 Trust me when I tell you that measuring browser market share is complicated. There is no definitive number that represents IE’s “market share.” Numbers are different in the US and other countries. Some surveys measure the number of times a browser hits a particular page – in those, for example, if you visit the New York Times ten times with Internet Explorer, that would count ten times as much as a single visit with Chrome. Other surveys count unique visitors, so your browser would be counted only once. Some surveys lump desktop and mobile browsing together, giving a lift to Safari and Chrome; others report desktop browsers separately. Some browsers pre-load pages, causing hits even for pages that are never viewed. There’s a difference between the number of browsers that are installed and the number of times each one is actually used. There are many more things like that to make it complex and nuanced.

So there are many firms that report browser usage share and the numbers vary widely depending on how each company handles the complicated bits. The important thing is that every single one of them broadly shows exactly the same trend that you see in the above chart: Internet Explorer is sinking like a stone; Firefox had its day but is also heading sharply down; and Google Chrome is rising fast.

Here’s a study from Net Applications  this week that showed Internet Explorer dropping 2.1% in a single month, for example. Meanwhile, Digital Analytics Program reported a few days ago that its numbers worldwide show Google Chrome with almost twice the market share of Internet Explorer, 42% for Chrome vs. 23% for IE. Just one year ago the same company measured IE’s market share as literally three times that much.

Want an anecdote? Talking Points Memo is a political site whose users skew towards Macs and are hardly a cross-section of the entire population. Still, it has a lot of users and does its own measurements of browser usage. It reported a couple of days ago that 40% of the people accessing the site are using Chrome . . . and five percent are using Internet Explorer. Five percent! Six years ago it was 30%.

There are many reasons for the switch from Internet Explorer to Chrome. Let’s lump them into three broad categories.

Chrome feels fast. It is extensible and developers have created an entire ecosystem of add-ins for Chrome. In fact it is so versatile that Google has created an entire operating system that is more or less a supersized version of the Chrome browser. Chromebooks are making an impact in the market because they’re dirt cheap (mostly) and very easy for educators to use in school systems, so an entire generation is going through school immersed in the Google ecosystem and using Chrome exclusively.

For the last few years, developers have treated Chrome as the standard for developing web pages. Internet Explorer included all kinds of proprietary technologies that Microsoft hoped would be broadly adopted and give IE an edge (remember ActiveX?); Chrome was built on web standards and at least initially was more secure and stable as a result. Microsoft made a mighty effort to re-architect Internet Explorer to meet the same standards, then it started over with the Edge browser in Windows 10, which is intended to be stable and secure and standard and fast and all the other things that Chrome already does. Edge may turn out to be a good browser someday but it was released when it was still woefully incomplete and so far offers no hint of any reason why a Chrome user would begin using Edge instead. When you’re considering market share, by the way, it makes no difference whether you lump Internet Explorer and Edge together or not; the trends are the same.

The result of the standards debate is my subjective feeling that Chrome handles more web pages correctly than Internet Explorer. For a year, I used Chrome as a backup, because it would usually work fine when IE crashed or wouldn’t load a page. A few months ago I shook my head and started using Chrome full-time, with IE as the backup. I rarely have to use IE.

Chrome isn’t perfect. Google is still working on memory issues and trying to find the right balance between user security and the appeal of an open environment for extensions. Internet Explorer users have a bit of a learning curve and the rewards may not seem worth it. But I’m recommending Chrome and setting it up as the default browser on new computers this year.

In the early days – ten years ago, say – computers were new and mysterious and everything was a challenge. It was easier for most people to stay in the Windows world, with a Start button and buttons in the upper right to expand / minimize / close windows and all the other familiar Windows conventions. It was difficult for non-tech people to switch between Windows and Macs. It was even difficult to switch from one browser to another, with the home button in a different place or a different name for Favorites. I have vivid memories of how people struggled with small changes. Windows and Internet Explorer were the defaults; we got used to them and it was difficult to think of a reason to switch.

Then the mobile revolution happened. Only a few years later, everyone had adopted new devices with radically different interfaces from their computers – and it went fine! We are more comfortable with technology. You may not have consciously thought about it but your phone taught you that it doesn’t matter what program displays a website – you just want the website and there’s no reward for loyalty if you stick with Internet Explorer on your computer. Android quickly made its climb to 80%+ market share, which meant most of you were signing in with a Google ID and using Chrome on your phone, and Google Chrome was standing by on  your computer to sync your bookmarks and passwords and open tabs. Mighty tempting!

At one time the name “Microsoft” was a mighty force with unquestioned power to set the agenda for our personal computing and for the entire technology industry. Windows had a market share of over 90 percent.

Apple sets the agenda, dominates the conversation, and has the reputation of making the best devices. Its software (especially its Windows software) is a mess but that didn’t stop Apple from being seen as the bright shining star of technology, with Microsoft as the stodgy company that the cool kids avoided.

Microsoft had never been perfect but it thrived when there was less competition. Its mistakes in the last eight years chipped away at its brand and its reputation, while other tech companies – Apple, Google, Facebook, Amazon – executed more smoothly.

The most devastating mistake, of course, was the failure to be a force in the market for mobile devices. Windows Phone was late and although it had some interesting features, it wasn’t remotely good enough to compete with the iPhone and Android phones. That’s only one of a number of moves by Microsoft that have been too little, too late, or not good enough. Someday I’ll go through the multitude of examples (*cough* Windows 8) but the effect is that the name “Microsoft” is devalued and serves more often as a punchline than an example of technical excellence.

In the consumer and small business space, then, expect to see Microsoft diminishing in influence and importance. It has done a brilliant job of ensuring that Office continues to be our productivity mainstay, and it has executed well enough with Windows 10 that it will be the dominant operating system for many years. And yet there are even chinks in that armor – Mac sales are on the upswing in the US, and we can’t underestimate the long-term effect of Chromebooks filling up our schools.

The interesting thing is that from another perspective Microsoft is not declining at all. Microsoft CEO Satya Nadella is executing a pivot of the entire company that will result in Microsoft continuing to grow and be profitable, even as its consumer and small business products lose ground. Microsoft is rapidly developing cloud-based services for enterprises that no other company can match. Amazon Web Services is the biggest provider of cloud computing services in the world, but Microsoft is gaining ground with Azure and rolling out cloud-based enterprise services at a rapid clip. Microsoft is on track for its commercial cloud business to hit $20 billion dollars in two years.

In other words, Microsoft isn’t going anywhere. It will continue to be a dominant force in enterprise technology even though the cool kids won’t give it any respect. As for you – try using Chrome as your browser. It’s nice.