Apple And The Ever Multiplying Devices 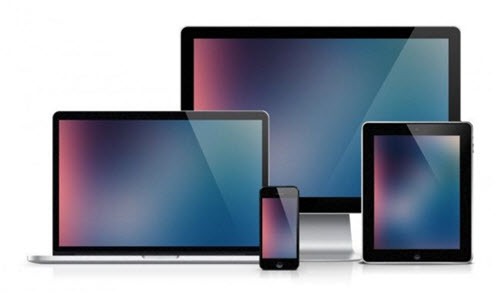 Until recently, Apple’s business strategy was to release only a few devices but make each one special and highly anticipated.

In the last few years the anticipation has been waning as Apple has failed to deliver the Next Big Thing, as described in the previous article. Apple has naturally turned, therefore, to refining its existing products and addressing niches in the market. Nothing wrong with that. It’s the correct strategy for a mature company.

But it has meant leaving behind one important part of the Apple mystique: its very simple product lineup. That simplicity helped define Apple’s image as the company that knew what was best and would only produce the one best thing, rather than making many overlapping products. Cleaning up a cluttered product lineup was one of Steve Jobs’ first decisions when he returned to Apple. Steve Jobs at WWDC in 1998: “What I found when I got here was a zillion and one products. […] It was amazing. And I started to ask people, why would I recommend a 3400 over a 4400? Or when should somebody jump up to a 6500, but not a 7300? And after three weeks, I couldn’t figure this out! And I figured if I can’t figure it out working inside Apple with all these experts telling me into it, how are our customers going to figure this out?”

First Apple adopted a policy of leaving the prior generation of device on the market when it released an upgraded version. Then it started releasing variations on existing products that are basically identical but for the screen size. Now their product lineup is nothing like that simple matrix you remember.

The Verge put together a list last week that shows all the products currently sold by Apple, sorted by the size of the screen on each one. The list also shows the screen resolution and pixels per inch (PPI) for each device. Think Apple has a simple product lineup? This is what Apple sells in April 2016. 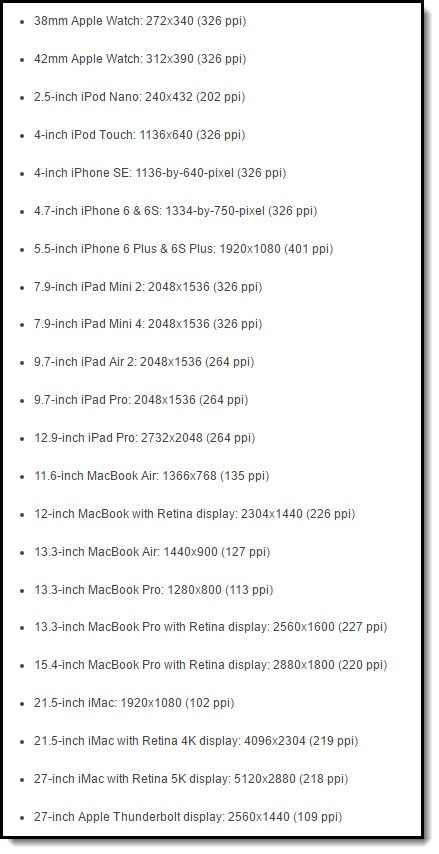 Impressive list, isn’t it? Remember that each one is available in a variety of colors and configurations – there are hundreds of different combinations.

The last few product announcements from Apple have added devices to that list that are very precisely targeted at market niches. They’re not expected to take over the world. They’re filling holes in that chart.

Last week Apple introduced the iPhone SE, with a 4 inch screen that looks tiny today. Only two years ago, it was the only size of iPhone that Apple sold. Today there are three sizes of iPhones and five different models for sale.

Not very many people will buy a 4 inch iPhone; most of us have quickly become conditioned to larger screens and the smaller iPhone looks like a toy. But there is an audience that will happily buy the iPhone SE for whatever reason makes sense to them: small hands; small purse or pockets; or perhaps the chance to get the status of an iPhone at a lower price. As I understand it, the new iPhone SE is literally identical on the outside to the old iPhone 5, and almost completely identical to the current iPhone 6S on the inside (with a couple of things left out for lack of space). In both cases, outside and inside, Apple was able to cut costs by not attempting to engineer new components from scratch. It’s obviously not innovation; this is pure market segmentation.

The 9.7 inch iPad Pro also announced last week is an even more odd attempt to slice and dice the market into very fine segments. It is identical in appearance to the iPad Air 2. Literally identical – same size, same weight, same screen resolution, same battery life, same operating system. In a previous era, Apple would have presented it as the iPad Air 3, the natural replacement for an existing device with better specs at the same price. Not this time. Instead of replacing the iPad Air 2, Apple is selling the iPad Air 2 and the 9.7 inch iPad Pro next to each other, using the word “Pro” to create the impression that there is some meaningful difference that justifies a higher price and a separate place in the product lineup. Sure, the specs are slightly different – better processor, better speakers, a mediocre keyboard – but let’s face it, these are two identical iPads and the biggest difference is the branding.

Focus on the branding, then. Apple is trying to find a niche for iPads in the world of business, where Microsoft Surface hybrid laptop/tablets are shifting public perception back to the idea that Windows computers are the best devices for getting work done. The stink from Windows 8 is rapidly dissipating, leaving Microsoft with devices that are comparably priced or slightly cheaper than iPads and capable of much more. Microsoft’s focus on Windows laptops and hybrids as the only true productivity devices is convincing. iPads are just great for watching movies and flipping through pictures. Hanging the word “Pro” on an iPad doesn’t make it a very good device for pounding out documents in Word or updating spreadsheets in Excel. Not to mention those programs that only run on true Windows PCs and don’t have adequate substitutes on the iPad – Acrobat, Photoshop, Quickbooks, whatever desktop app is important to you. When you can get all those capabilities in an attractive laptop or hybrid that is also good for watching movies and flipping through pictures – well, the iPad Pro has an uphill battle for you to choose it as your productivity device.

As I mentioned in the last article, it is harder for Apple to stand out when its competitors have learned so much by studying Apple. All of the Surface devices arrive in simple and elegant packaging, and the design is just as luscious as any Apple device. Look at the HP Spectre announced today and it’s obvious that the manufacturers have not only come up to Apple’s level of design, they’re starting to exceed it. Wired describes the Spectre this way: “This is a laptop that all but oozes champagne as the pistons of its hinge rise, spinning, from their resting place. This is a laptop unveiled not at tech shows like CES or IFA, but at the New York Times International Luxury Conference. In freaking Versailles.” You wouldn’t have described an HP laptop like that a few short years ago. HP has learned much from Apple and is ready to go toe to toe on design. Dell and Lenovo have also stepped up their games in the last year and other manufacturers aren’t far behind.

Apple makes some of the best technology in the world. You won’t go wrong with an iPad. I carry an iPhone 6S Plus, easily the best phone I’ve ever owned. Apple will release updated laptops later this year and probably continue to gain laptop market share, despite the shortcomings of the aging OS X. But when you go shopping, expect to be a bit confused by Apple’s overlapping products and blur of price points for all the different configurations.