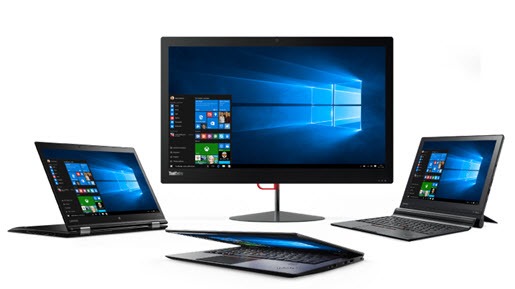 Lenovo has expanded its X1 line to include a traditional laptop (Thinkpad X1 Carbon); a convertible laptop with a keyboard that flips 180 degrees (Thinkpad X1 Yoga); a Surface-style tablet with detachable keyboard (Thinkpad X1 Tablet); and an ultra-stylish all-in-one desktop computer (ThinkCentre X1). These are, hands down, the most elegant business computers on the market. The designs are simple and unadorned, streamlined, and lightweight, with well chosen components and no distractions. All of them are matte black (no colorful options), which may not be to everyone’s taste but gives each one a distinctive and deliberately understated look that makes it clear these are business-class devices.

I’m kind of in love.

I know, it’s passé to care about laptop design these days. There are lots of great thin and light laptops. Dell’s XPS 13 and XPS 15 are stunning. The new HP Spectre X360 looks wonderful. Samsung just introduced the Notebook 9, a thin 15” laptop that weighs less than 3 pounds.

Somehow, though, it’s the Lenovo X1 lineup that makes my pulse speed up a bit. 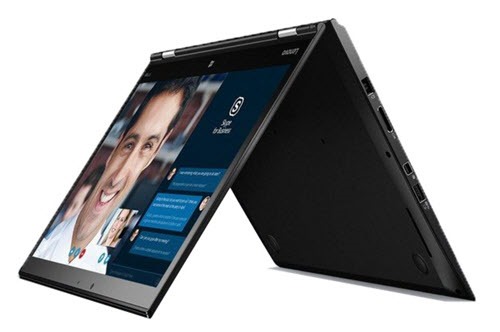 I’ve owned a Lenovo Thinkpad X1 Yoga for six months. It is . . . perfect. Just perfect. It’s the finest laptop I’ve ever owned by a large margin. It feels like the culmination of the last twenty years of laptop development. It has a 14” screen, larger than most of the other high-end laptops, which are usually 12”-13” to keep the weight down; the X1 Yoga still manages to be paper-thin and only 2.8 pounds. The screen is high resolution and gorgeous, and of course I got a touchscreen because I consider that to be as much of a basic requirement as a touchpad today. (Once you become accustomed to scrolling a web page by reaching out and flicking it, it’s difficult to do it any other way.) Lenovo is well known for putting the industry’s best laptop keyboards in their Thinkpad line. The keyboard is backlit, something that is all too often missing from otherwise high quality laptops. The system starts instantly, sleeps reliably, and this year’s fingerprint reader is reliable and instantaneous. It has a reasonable number of USB and display ports, plus an optional docking station that works smoothly. It’s fast and fluid under every load I’ve thrown at it. Battery life has been outstanding.

The signature feature of the X1 Yoga is the hinge that allows the keyboard to flip 180 degrees, making the X1 Yoga into a heavy and slightly large tablet. Folding it over also allows the X1 Yoga to be set down with the screen facing out for a presentation, or set up tent-style to watch a movie on a plane without risk that the keyboard will be slammed into your stomach when the passenger in front of you reclines their seat. When the cover is folded back more than 90 degrees, the keys on the keyboard are actually withdrawn to be flush with the surface so they’re not damaged when they’re resting on the desk. The 180 degree hinge is not an essential feature but I’ve used it often enough to be glad to have it. The Thinkpad X1 Carbon is essentially identical to the Yoga but without the special hinge that allows the screen to fold back, and without a touchscreen, for a few hundred dollars less.

In a world that seems to always require compromises or living with imperfection, the Thinkpad X1 Yoga is perfect. 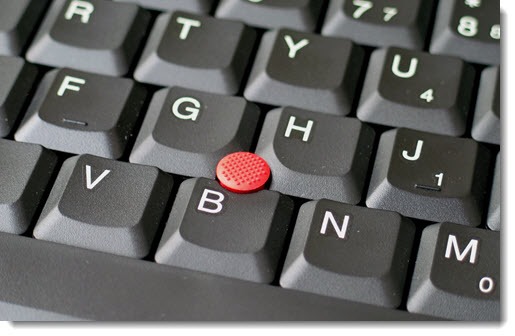 Lenovo includes the Trackpoint pointing stick in all its Thinkpad keyboards. Although they’ve been featured on Thinkpads since IBM introduced the Thinkpad line in the 90s, most people have never seen one before. Some people get a Thinkpad (or one of the handful of Dell or HP laptops that include a similar nub) and never use it.

And then there are people like me who believe the Trackpoint is one of the great unheralded advances in personal computing. I gave up a Thinkpad X1 Carbon and used a Surface Pro 3 for a couple of years and had a nice experience. But I am ecstatic to have the Trackpoint back on my X1 Yoga. It may be enough by itself to sway my next purchasing decision to keep me in the Lenovo family.

The Trackpoint pointing stick in the middle of the keyboard (pictured above) is a little joystick to move the mouse cursor. Push it gently left, right, up, down, and the mouse cursor moves in that direction. There’s not enough play to actually feel as if you’re pushing a stick around; Lenovo’s Trackpoint requires only the suggestion of a push to get the cursor moving. The keyboard is set up with a left and right mouse button below the space bar, exactly where your thumbs are, in addition to two buttons in the traditional spot below the trackpad. The result is that all tasks can be performed without ever moving the hands from their position on the keyboard. It’s second nature to me after years of using Thinkpads. I can move faster and more fluidly with the Lenovo keyboard than I can on my desktop where my hand is constantly moving back and forth between the keyboard and the mouse.

Lenovo is about to start shipping the Thinkpad X1 Tablet, which brings Thinkpad styling to a tablet modeled on the Microsoft Surface Pro 4. The X1 Tablet has the look and feel of the Thinkpad X1 Carbon and X1 Yoga laptops, but includes a detachable keyboard and two-position kickstand. The keyboard is visually very similar to the laptop keyboards but Lenovo has made it considerably thinner and lighter. The kickstand folds out from a hinge at the bottom instead of from a hinge in the middle of the tablet, which gives it a more stable feeling when it’s in your lap. The X1 Tablet has a 12” screen, a bit large to be a tablet but just fine for a device that will do double-duty as tablet and laptop. It’s similar to the Surface Pro 4 in size, weight, features, and price, but with the Thinkpad design and the Trackpoint pointing stick in the keyboard. 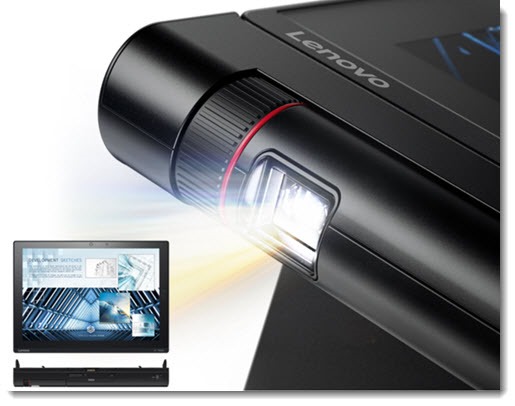 Lenovo has added a unique feature to the X1 Tablet: a port for clipping a module below the screen to add enhanced features. Three optional modules will be available: the intriguing Presenter Module, which integrates a projector that reportedly beams a 60 inch projection to the wall or a screen from a few feet away; the Productivity Module, a fancy name for an extra battery that will extend battery life for several hours; and the 3D Imaging Module with a special Intel RealSense camera for 3D scanning. 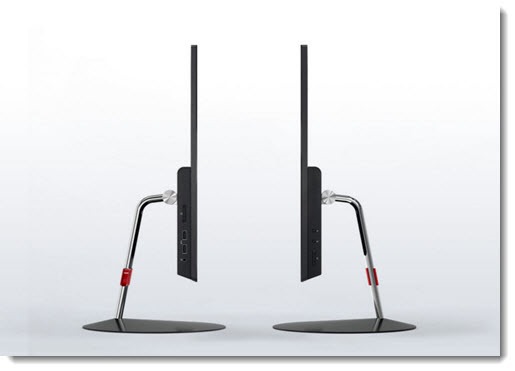 The all-in-one desktop ThinkCentre X1 has not shipped yet and I haven’t seen any pre-release comments from a reviewer who has used one. But the hype and promotional pictures show a 24” computer that is just as thin and stylish as the other X1 products. You can see the contours in the above picture, a super-thin monitor panel with a baby bump holding a 6th generation Core i5 processor and all the usual components inside. Lenovo claims to be quite proud that it has made the fan noise almost inaudible. Although I have a high opinion of some of Dell’s recent all-in-ones, this looks like it might be noticeably better as an accessory that dresses up your home or office or is suited to public spaces in a business.

That settles it, then! You’re getting an X1 for your next computer.

Well, it’s probably worth mentioning one modest extra consideration. Really, it’s nothing. Barely worth bringing it up. Except that the X1 products are just the teensiest bit expensive. My Thinkpad X1 Yoga, configured with a Core i7 processor and a 512Gb SSD was $1800, just under two thousand dollars with tax. Perfection doesn’t come cheap!

The X1 products are priced comparably to or just above the flagship products from the other manufacturers. You could spend similar amounts on the high-end Dell and HP laptops I mentioned above, or on comparable MacBooks. The X1 Tablet is priced almost identically to the Surface Pro 4. You could spend almost as much on an iPad Pro as the X1 Tablet. Heck, you could spend far more on Microsoft’s overpriced Surface Book.

So I just don’t want you to be shocked when you price these out. The business laptop you want is going to be more than $1000, and possibly quite a bit more. The extra money is worth it if you value light weight and portability, reliability, fast startups, long battery life, and business class styling.