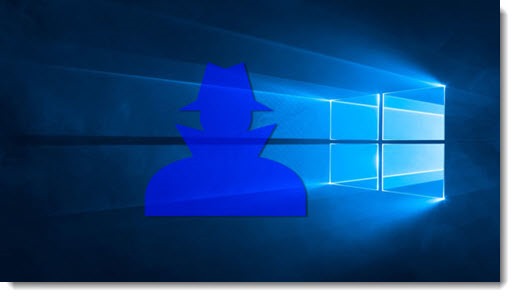 Windows 10 is a nice operating system. Microsoft should be proud. In the next few years, it will become the dominant platform on computers worldwide, with a long lifespan as the natural successor to Windows 7.

But somewhere in Microsoft is a group of people making boneheaded decisions driven by desperation. Rather foolishly, Microsoft loudly announced an arbitrary goal (“1 billion Windows 10 computers in 3 years”) which was always going to be a long shot at best. Although hundreds of millions of computers have upgraded in the first year, the uptake for Windows 10 has been slower than Microsoft hoped/expected. Instead of accepting that with resigned grace, Microsoft has been pushing harder and harder to fool people into upgrading, to the point where its latest tactics are deceitful and indefensible.

By this time, most people have made their decision about Windows 10. Lots of people don’t want to upgrade, for perfectly valid reasons. For some people it’s a reasonable fear that the upgrade will cause problems; or perhaps a need to stay on an older OS for compatibility with a line-of-business program; or maybe just a desire to keep something familiar in a world that changes too fast.

Last week I heard from numerous clients whose computers had updated to Windows 10 overnight without their permission. In most cases my clients did not want the upgrade and had specifically intended to stay with Windows 7 or 8. Their work was interrupted by an unexpected shutdown and lengthy delay. My week has been spent fixing problems caused by the upgrades. I’ve got a bluescreened laptop on the desk next to me that will require an expensive rebuild. At the least, everyone is dealing with the inconvenience of poorly chosen defaults and unwanted changes. (If your computer upgrades to Windows 10, save yourself some frustration and refer to my article about how to configure it!)

Instead of being praised for making a fine operating system, Microsoft is being demonized for its dishonest, heavy handed tactics to promote Windows 10. It deserves the criticism.

The Windows 10 upgrade push started last summer with an icon in the system tray in the lower right corner and insistent notices appearing onscreen urging a “reservation” of a copy of Windows 10. The “reservation” was meaningless and it was quickly discovered that Microsoft was downloading the Windows 10 install files in the background without any notice regardless of the choice for the “reservation,” using up hard drive space and stealing bandwidth that some people could scarcely afford. Meanwhile the upgrade notices became more insistent, splashing across Internet Explorer and popping up in nonstop windows. Although we’ve been using the euphemism “upgrade notice,” this is just advertising, as much as any adware that pops up unwanted onscreen.

In February Microsoft escalated its upgrade assault by elevating the Windows 10 upgrade to be a “Recommended” update in the Automatic Update system. Since most people configure their computers to install Recommended updates automatically, that began a wave of forced upgrades that took many people by surprise.

Microsoft began a series of popup notices that purport to “schedule” the upgrade. The ads kept changing – some did not have any obvious way to cancel or delay the upgrade, some used confusing wording or stuck the cancel/delay option in very, very small print off to one side. Those are techniques perfected by the scumbags distributing adware that have turned our computer experience into an exercise in paranoia. It was unworthy of Microsoft.

Starting last week, the notice that appears, the one that looks identical to the one that’s been appearing for the last four months, does one thing differently. If you click the X to close the window, you are agreeing to the upgrade. 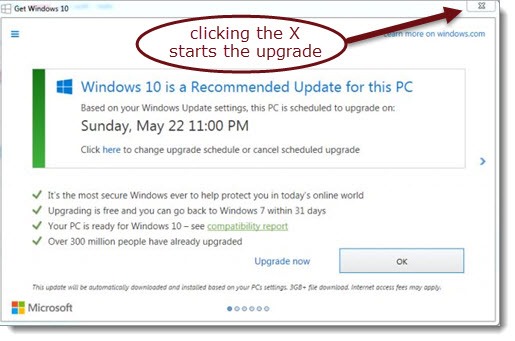 That’s not the way it worked before last week. The notice would appear, you’d hit the X and close the window, and the upgrade would be put off until the notice appeared again. Last week people went to bed knowing they had closed the upgrade notice, and they woke up to an unfamiliar computer. They learned an important lesson: Don’t trust Microsoft. Microsoft lies. It takes years to build trust, but only one violation to destroy it.

I’ve been publishing the Rules For Computer Safety for many years. It has always had a warning about malware and viruses: “If a web site brings something up on your screen that might be malware, turn your computer off with the power button. Get your hands off the mouse and do not click on “OK,” “Cancel,” or the X in the upper right corner! Anything that you click might lower the defenses on the computer and install malware.”

There’s no excuse for this. Microsoft is acting like it’s ashamed of Windows 10 and can only give it away by fooling people. This should be Microsoft’s year for glory and celebration. Instead it’s burning through people’s trust and earning ill will. It’s a shame.

All the info is here to help you decide whether or not to upgrade. If you decide not to upgrade, run Steve Gibson’s Never10 utility. It takes only seconds; it disables the entire Windows 10 upgrade process and removes the upgrade ads. We can only hope that Microsoft doesn’t change the rules so it stops working. And what has Microsoft done to its reputation that it even occurs to me to mention that?