The Pain Of Windows 10 Updates 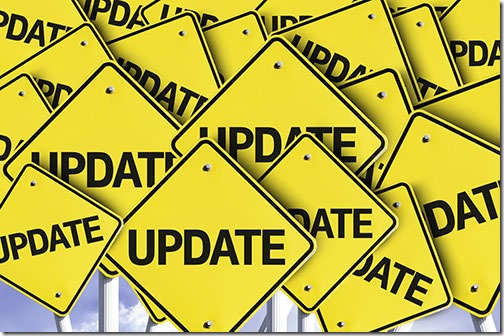 Windows 10 updates are driving me crazy. Well, so are lots of things, but the update process has become a persistent annoyance. Let me gripe about my experiences a bit, then I’ll give you a suggestion that might ease the pain.

Microsoft changed the update process in Windows 10. System updates (including drivers) are now mandatory for anyone running Windows 10. There is no option to decline. It’s an important way that Microsoft can guarantee that Windows 10 will remain consistent and stable going forward. (Enterprises have more complex options. I’m talking about individuals and small businesses.)

That concept makes perfect sense to me. Microsoft is trying very hard not to release updates that break things, so Windows 10 updates have so far been helpful and (mostly) bug-free.

There are two problems with the process, though, that are somewhere between distracting and rend-your-garments-rage-inducing:

•   Problems caused by updates waiting for a restart

Updates waiting for a restart

Updates to Windows are downloaded in the background. If they can be installed and activated immediately, that’s also done in the background. If they require a system restart, that’s a two-part process. First the update files are placed in position, poised, waiting for the restart. The install routines are carefully crafted not to disturb the computer until that restart happens. When the system restarts, the new files are quickly shuffled into place so they’re ready when the desktop appears.

Except that’s not always happening.

Too often, I sit down at my desktop PC or open the lid on my computer, and deal for a while with things that aren’t right. Maybe the wireless doesn’t connect. Maybe the laptop has trouble coming out of sleep. The browser freezes. File Explorer shows “Not responding.” No big problems, just signs of a tummy ache.

At some point I reach for the Start button, and my blood runs cold when I see a change in the Power options that has become all too familiar. 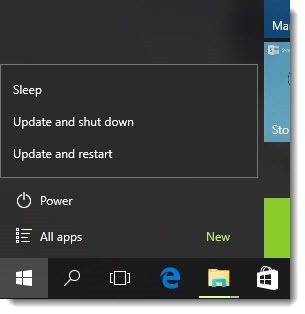 There are updates that have partially installed and need a restart to complete. And they’re mucking things up. No notice and no way to suspect that’s the problem unless you’ve been burned by it so often that you learn to check, just in case.

Restart the computer, get the familiar pause on the update screen at 30% as if the computer has crashed, and eventually the computer comes back and behaves completely normally.

It doesn’t happen often, but it’s often enough that I’m spooked now. It’s one of the first things I check on client computers when I’m troubleshooting. We shouldn’t have to do that! Microsoft has been running the Windows update system for twenty years, after all.

I don’t have any documentation or specific examples of this one, just a deep conviction that pending updates have periodically interrupted my happy computer until the computer is restarted. It’s not supposed to work that way.

Nothing causes more computer rage than an unexpected shutdown and restart in the middle of the work day. It will always happen at the worst time – in a meeting, or during a presentation, or at the moment you’ve done an hour of work on a document without saving it. In one particularly embarrassing incident recently, a live gaming session being streamed to an audience of 130,000 people was interrupted when the computer spontaneously restarted to install an update.

That’s not the way it’s designed. If possible, the computer should restart in a way that does not disrupt you at all. If you’re logged in with open programs, you should get polite notices asking you to choose a convenient time to restart. If you procrastinate too long, eventually the computer will announce that it’s going to restart in fifteen minutes so you have time to save your work.

That’s usually the way it works – but not always. The screams of anguished people on Twitter and social media are proof that the system has bugs that occasionally lead to a maddening unplanned encounter with a swirling circle.

I haven’t had it happen to me but I hear about it occasionally from angry clients. Not often. But you would only need to have this happen to you once to lose faith in Windows 10 and Microsoft for a long time.

It doesn’t help that the schedule for Windows 10 updates has become harder to predict. Microsoft still releases most updates on Patch Tuesday, the second Tuesday of each month, but it feels as if the schedule is far more flexible now and updates might appear almost any time. Microsoft doesn’t want updates to cause you to lose work so computers frequently are not restarted overnight, leading to restart notices days later when Windows become impatient. It’s hard to trace it back to a Tuesday patch release. 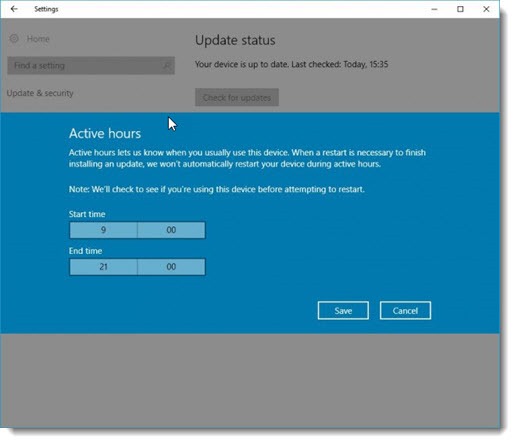 The Anniversary Update for Windows 10 will start rolling out on August 2. It includes a new option to schedule restarts for automatic updates, shown above. You can set “Active Hours” when the computer will not schedule a restart. That seems like an exceedingly modest improvement but maybe it will help a bit.

Windows 10 tip: Set updates to notify you before restart 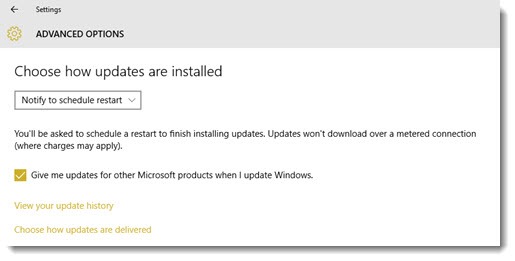 There is a choice in Windows 10 of how to handle updates. Look in Start / Settings / Update & security / Windows Update / Advanced options.

By default, the setting for installing updates is “Automatic (recommended).” Restarts happen automatically when you’re not using the computer. You’ll get polite notices if long periods go by when the computer can’t find a safe time to restart – for example, if the computer stays logged in with open programs overnight.

The alternative is shown above: “Notify to schedule restart.” When that is chosen, the computer always pops up a dialog after updates have been downloaded and the system is ready for a restart. 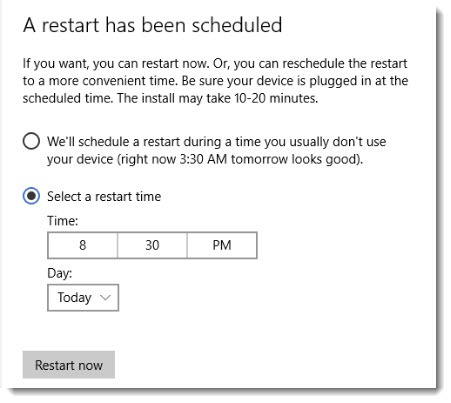 You can choose to restart immediately, let the computer restart overnight, or pick a time.

This seems like a good compromise to me because perhaps it will also alleviate the first problem above, the hidden update waiting for a restart. I don’t mind restarting the computer. Windows 10 and a solid state hard drive makes that painless. It will help to know that a restart is required.

The nonstop stream of updates is mostly required because very bad people are endlessly inventive in their quest to hack into our computers and steal our souls. We’re stuck with this process. I wish it could be done without the pain points. Have you noticed that computers are too hard to use?