Quickbooks Moves Inexorably To The Cloud 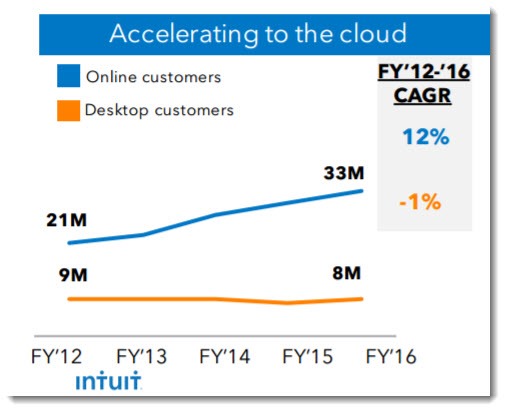 A second chart shows the momentum that Intuit has achieved for Quickbooks Online since its launch. 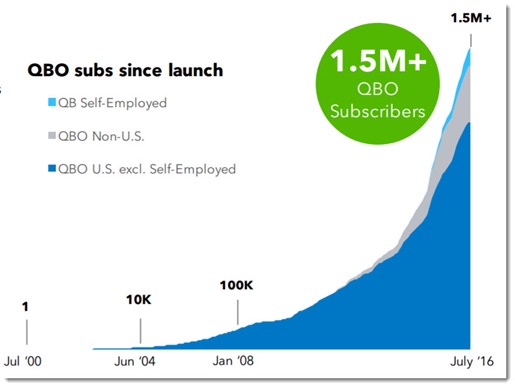 There were a couple of interesting details in the earnings call. Quickbooks Desktop pricing Intuit studied the reluctance of desktop users to move to the online version of Quickbooks and discovered that features and pricing had little to do with it. Instead, it’s a mindset: some people just aren’t ready to move to the cloud. Last year Intuit experimented with a price increase for Quickbooks Desktop as an incentive to drive people to Quickbooks Online, but found it made little difference except to discourage customers from upgrading their desktop versions. After they brought the pricing back to normal for the desktop program, the regular upgrade cycle resumed, including people who had delayed an upgrade last year. That’s what accounts for the tiny increase in 2016 desktop sales. International sales Intuit’s stock price went down after the 4th quarter earnings report because the company is having trouble getting traction for Quickbooks Online internationally. The international market is huge and Intuit is chasing it aggressively but results haven’t lived up to their hopes yet. Again, there’s no comfort for desktop loyalists in weak Intuit numbers; it will make the company work harder on the cloud version, not pivot back to the shrinking market for installed desktop programs. I had a terrible experience with Quickbooks Online a year ago when the import from my Quickbooks desktop company file went sideways. I bailed out and went back to the desktop version. A few weeks ago I made another attempt and, well, so far it’s been flawless. Years of transactions imported accurately and the connections to my bank were painless. I’ve spent a few hours doing chores: customizing forms; cleaning up errors that came over from my original company file; learning where things are in a very different interface. It’s immediately clear that Quickbooks Online is simpler than the desktop program with fewer complicated bits. Fortunately my needs are simple and the desktop program was always overkill, so I’ve actually been enjoying the transition quite a bit. I’m signed up for a plan that costs $15/month (after a six month introductory discount), but I saved a couple of hundred dollars that I didn’t have to spend to upgrade to the new desktop version and I’ve made my peace with subscriptions. There is a meaningful improvement in my life in one respect, the obvious one for a cloud service: I can now access Quickbooks from any device, whether it’s on the road from my laptop or on the Chromebook that I’ll be receiving soon. There’s even a mobile app for Quickbooks Online but I’m going to try to live a life that never requires me to use it. Your mileage may vary. This is a very, very individualized area and I’m reporting, not recommending. But if you’re a Quickbooks Desktop user who is open to change, it’s probably time at least to look at the online option. [Postscript 11/11/2016: FitSmallBusiness.com just posted an extensive series of free tutorials for Quickbooks Online, with tips for beginners as well as deeper looks at specific features. Recommended!)
← Previous Post Next Post →