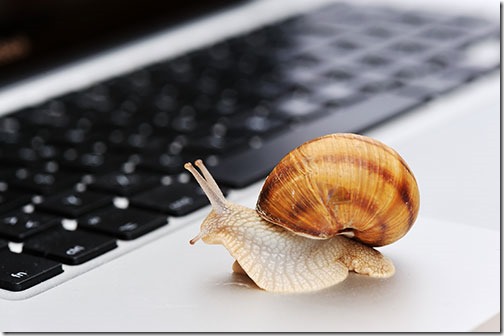 Computer manufacturers are letting us down. Computers are being sold with specs that appear to be perfectly fine, but buried in the small print is a detail that means they are deliberately hobbled. They will disappoint you from the first day they’re turned on. Beware of the 5400 RPM hard drive!

•  You are very fortunate if you can afford a fancy new premium business laptop. Most people are looking for the cheapest PC they can find. Instead of helping buyers make smart decisions, manufacturers compete for the bottom of the market by putting in the cheapest possible components whenever possible, even if that guarantees a poor experience. It’s been going on for years. Manufacturers were partially responsible for the death of Windows Vista almost ten years ago when they knowingly put out underpowered hardware that could not run Vista well.

•  Most people focus on big numbers. It’s hard to blame them. Computers are complicated. Spinning hard drives are cheaper and able to hold more data, so cheap computers typically boast 1Tb or 2Tb of storage space. It’s not obvious that those big drives are cheap and slow. Solid state drives are typically 256Gb or 512Gb. People see those numbers and think the computer with four times as much hard drive space must be better.

It’s not reasonable to expect non-technical people to understand the details of how hard drives are built. I wish manufacturers would do the right thing and start installing SSDs across the board, but they won’t. There’s still a pretty significant price difference per gigabyte between SSDs and spinning drives; we’ll still see big spinning drives in cheap computers for a few years more.

But there’s one more important detail and it’s kind of unforgiveable.

Spinning hard drives spin at two different speeds, 7200 RPM and 5400 RPM. There is a noticeable difference in performance between the two, when the drives are running the operating system and opening programs.

If you get a new computer with a 7200 RPM hard drive and click on a program, the program . . . will . . . start. Hey, it’s not awful. You’ll get your work done. You can drive a Prius up a freeway entrance ramp and you’ll get to full speed eventually, right? 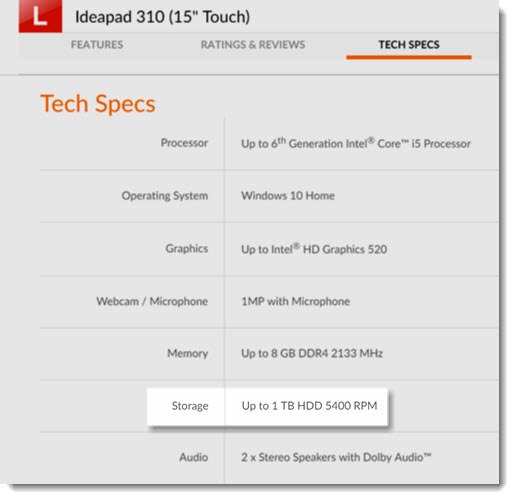 You will likely only find these slow drives on the cheapest Windows computers, like the Lenovo Ideapad 310 in the above screenshot (starting price $549).

I noticed this when I was researching all-in-one PCs, where the monitor on the desk holds the innards so there is no separate tower on the floor and a minimum of cables. All-in-ones are a tempting choice. At one time they were prone to overheating and it was frustrating that they couldn’t be opened up to change the internals – add memory or swap out the video card or the like. Now we rarely change anything inside a PC and heating issues are far less common. It’s tempting to get an all-in-one and remove cable clutter.

Too many all-in-ones are built with fine components, except for the slow hard drive. The Dell Inspiron 24 3000, for example, can be purchased with an Intel Core i5 processor and 8Gb of RAM and a touchscreen for $799, but performance will be miserable with the 5400 RPM hard drive. Dell does not offer an SSD or faster drive as an option.

This even turns up at the high end. Microsoft introduced the Surface Studio in November. It’s a very expensive all-in-one aimed at creative professionals, with a gorgeous 28” display on a unique mount that allows it to be lowered almost flat for drawing on the touchscreen like a drafting table. Its elegant, minimalist lines appeal to architects and artists who can pay top dollar for the best tools. Surface Studio is the kind of computer that Apple would have designed a few years ago. It was quite striking that Microsoft introduced a beautiful aspirational computer literally one day before Apple’s lackluster introduction of revamped MacBook Pro laptops that excite no one.

The cheapest Surface Studio is three thousand dollars. For three thousand dollars, you get an amazing ultra-high resolution display, an innovative mount, almost the latest Intel processor and Nvidia video card, and . . . a 5400 RPM spinning hard drive. That’s a little misleading because Microsoft pairs it with a small solid state drive running the operating system, so performance is not impacted as much as low-end computers that don’t get that boost. But it slows performance in a way that is noticeable to power users and that has no place in a three thousand dollar computer. Leo LaPorte, host of wonderful TWiT netcasts from Petaluma, tore down his Surface Studio and replaced the hard drive with an SSD. Here’s an excerpt from the show where he describes his reaction to the slow drive and shows how the difficult teardown was done. The result was a 400% improvement in read/write speeds. It makes no sense for the Surface Studio to ship with the slow drive.

Take a look at the hard drive when you buy your next computer. Always get a solid state drive if the budget allows. And don’t get a computer with a 5400 RPM drive even if you’re shopping for an inexpensive machine. Life is too short to get a computer that will make you sad.