Microsoft has a problem with names. It needs to seek help. I would suggest sympathy but I’m not feeling very sympathetic.

If you’re an old timer, you may remember when Outlook was a mail program that ran on Windows computers. Those were simpler times.

So here’s a fun and interesting question. Which version of Outlook do you use? You probably think you can find out by clicking on something like File / About Microsoft Outlook to get a comprehensible answer to that question. Try it! If you can find it in the desktop program (it’s not obvious), you’ll discover that Microsoft is only supplying apocryphal version numbers. And of course that doesn’t help when you’re using “Outlook” in one of its other incarnations.

That’s why Microsoft has been forced to create a visual aid. If you’re using a program or service that Microsoft has tagged with the overused Outlook name, all you have to do is compare the ribbon at the top of what you’re using with this chart to discover the official Microsoft name.

Seriously, the best Microsoft can do is suggest that you hold up flash cards next to your computer to determine what Microsoft program you’re using – all of which are named “Outlook.”

Notice that the chart does not include Outlook for iOS or Outlook for Android. It also doesn’t reflect the constantly changing names that Microsoft has used over the years for webmail – Outlook on the web, Exchange Web Connect, Outlook Web Access, and Outlook Web App.

I’ve never gone to business school. But it seems like these would be basic principles for companies that want to avoid customer confusion and enhance their brands:

•  Don’t use the same name to describe different products.

•  Don’t use different names to describe the same product.

Microsoft violates both of those principles over and over.

That’s a sad history. Lots of different names to describe the same product.

But then we hit the modern Microsoft, which is so focused on over-using names that it couldn’t resist using the OneDrive name on a completely different product. Microsoft took a business service, SharePoint Workspace, and renamed it “OneDrive for Business.” Microsoft does not use its brands consistently, so the business product is frequently referred to as . . . OneDrive. Just, OneDrive, with no easy way for users to tell that it is a separate service that requires different account credentials and holds different files than the personal OneDrive. 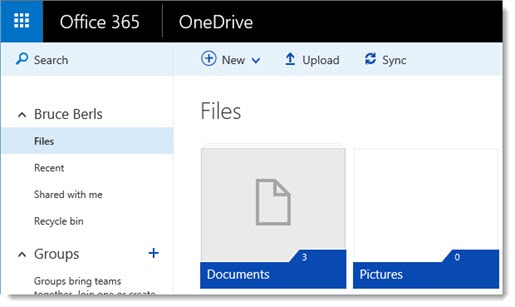 Remember, those are two different services holding different files. There is literally no way for anyone other than a Microsoft engineer to tell whether you’re connected to the work or personal service when you’re using OneDrive.

The confused branding of OneDrive makes it almost unusable for non-technical users. I’ve started to counsel my clients to use Dropbox as a way to avoid Microsoft’s confusing, overlapping OneDrives. 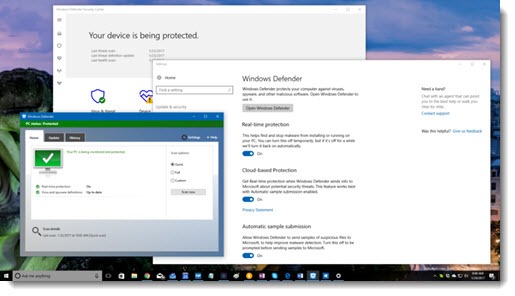 It gets worse. If you go to Control Panel / System and Security / Security & Maintenance, you’ll find different information, options and settings related to Windows 10 security.

Last week Microsoft announced an upcoming feature in the next update to Windows 10. It’s a new dashboard with information, options and settings related to Windows 10 security.

Okay, Microsoft wants to create a brand new place to summarize information about Windows 10 security. What does it choose to call it?

That’s four different places in Windows 10 with security information. Three of them have “Windows Defender” in the name.

This is very wrong.

Do you remember that Windows 8 had two completely different programs that did exactly the same thing, both named “Internet Explorer”? Explaining that to clients was a nightmare.

Business customers are starting to deal with Skype and Skype for Business (usually shortened by Microsoft to “Skype”), two wildly different programs with the same name and almost nothing else in common.

On and on it goes.