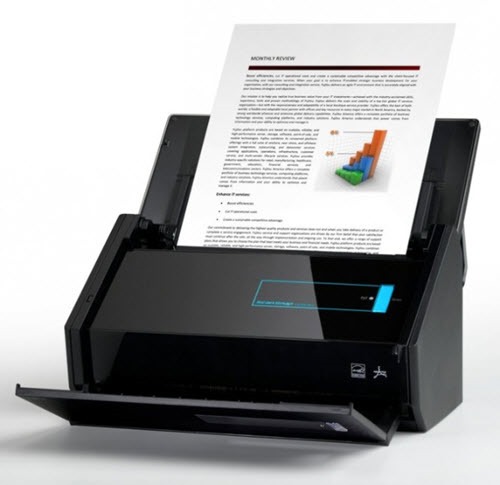 Fujitsu has made the best small business scanner for many years. You should have one on the desk of every employee who deals with paper.

The Fujitsu iX500 was introduced almost eight years ago. It was designed so well that it is almost unchanged today, and it continues to be the best choice for home and small business use. The Fujitsu iX500 is $415 at Amazon.

The desktop scanner in the above picture measures less than twelve inches across. Typically it sits on the desk and is connected to a desktop computer with a USB cable. When I put a stack of pages into my ScanSnap, it pulls them through at 25 pages per minute. (It’s scanning both sides so technically it’s 50 pages per minute.) There is zero delay after pushing the button before scanning begins and zero delay between pages. If one side is blank, it’s automatically dropped – no need to choose one-sided or two-sided scanning ahead of time. It chooses black & white or color automatically.

The feeder is very reliable and does some interesting tricks to make sure it doesn’t pull two sheets through together. It recognizes paper orientation so scans are always right side up. It automatically straightens scans if they are pulled through slightly off center.

The scanner does optical character recognition (OCR) on the files automatically. That allows them to be indexed by Windows so the full text can be searched later. It’s configured so the only step I take with each scan is to type in a meaningful file name.

The ScanSnap can handle business cards and receipts. Believe it or not, you can put a credit card or driver’s license through a ScanSnap, then attach the credit card scan to a secure note in LastPass.

If you only scan occasionally, there are now a multitude of phone apps that can use the camera in your phone to create PDFs – notably Office Lens (OneDrive users), Box Capture (Box users), and Google Drive (Google users). If you scan more than a few pages per week, though, the Fujitsu ScanSnap iX500 might pay for itself quickly in extra productivity and lack of hassle.

Last year Fujitsu released ScanSnap Cloud, which allows you to disconnect the USB cable and send scans directly to a variety of online file services. When ScanSnap Cloud is set up, the ScanSnap connects to wi-fi. Scans are automatically identified as documents, business cards, receipts, or pictures. They are given a name (a combination of the date and a snippet of text from the document, if possible) and sent directly to the service of your choice.

ScanSnap Cloud can be set up to send scans directly to OneDrive, Dropbox, Box, and Google Drive, as well as Google Photos for pictures. Law offices can set up ScanSnap Cloud to scan directly to Rocket Matters.

That’s an interesting option. It’s always been possible to save scans to the synced folder on your computer and let OneDrive, Dropbox, or Box Sync do the work of syncing a copy online. With ScanSnap Cloud the computer is bypassed and the files are sent to an online folder, where they are accessible from mobile devices or other computers without any delay.

Setting up ScanSnap Cloud starts with installing a small app on a computer or phone. (The Windows setup program can be downloaded from here.) The setup program installed a firmware update on my ScanSnap and got wi-fi credentials, then waited for me to disconnect the USB cable. Once it’s set up, you can go back and forth between USB scans and online scans by right-clicking on the ScanSnap Manager icon in the tray and checking/unchecking ScanSnap Cloud.

The ScanSnap Cloud app has options for naming the files but of course does not have any way for you to type in a name you choose on the fly. One option is for ScanSnap to name the file automatically by attempting to pull the date and a plausible name from a document. It works moderately well. If you get impatient because it’s inaccurate, it can be set to assign names using the scan date.

But the biggest limitation for businesses is that ScanSnap Cloud does not do OCR on the scans. Scanned documents will not be searchable like they would be if you scanned them to your computer. That’s a big deal and potentially a deal killer for many businesses. It’s possible to perform OCR later but that misses the point for businesses using the ScanSnap to fill digital file cabinets. OCR and indexing the contents of scanned documents are basic requirements for a successful office scan.

Personally, automatic file names don’t work for me. I feel helpless if I can’t name the files before they’re saved. The lack of OCR is a real problem. After experimenting, I went back to the USB cable. I’ve always got a desktop computer ready to work with the ScanSnap.

ScanSnap Cloud might fit your needs regardless, but it is particularly valuable for anyone who doesn’t always have a Windows or Mac computer readily available. That might include laptop users who do not want to power up just for quick scans, or Chromebook users who cannot install the ScanSnap Manager program.

And putting aside the cloud option: almost every office could benefit from having a few ScanSnaps. They’re a basic tool for small businesses, just as important as a printer.