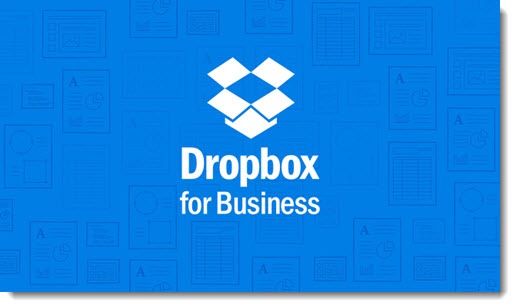 Dropbox has begun to roll out important improvements in its services for business. In particular, Dropbox team folders finally make Dropbox a viable competitor for Box for shared online company folders.

Some background before we get to the new features.

Although Microsoft and Dropbox try to make things fuzzy, the reality is that OneDrive and Dropbox were both built to hold files owned by individuals. They were not designed for shared company files. If you dig far enough, Microsoft acknowledges that OneDrive for Business is intended for individual files; shared company files belong in “Sharepoint Team Sites,” which you’re not using and you don’t want to use. (Remind me to bitterly mock Microsoft soon for the complete hash they’ve made of OneDrive. I haven’t done that for a few weeks and they deserve it.)

Meanwhile Dropbox introduced Dropbox for Business in 2014 but that did not alter the basic nature of the service in any way. Dropbox was designed for individual files held in individual accounts. Sure, you can share folders with other employees, but it’s been clumsy and full of difficult problems. I wrote about the individual focus of OneDrive and Dropbox here. Dropbox for Business added administrative controls over user accounts, which helped keep track of the accounts but did not overcome the weakness of the service for shared folders.

Box, on the other hand, was built from the ground up for shared company files. The entire service is built with the expectation that employees will have shared access to files owned by a company. Box has provided better tools than either Microsoft or Dropbox for integrating with Office, choosing folders to sync, and working with files on mobile devices.

The first new feature is team folders. Dropbox knows many people already have individual Dropbox accounts. Team folders are accessed using a Dropbox Business account assigned by your company. Both accounts are nicely integrated on your computer and online, so with luck it’s obvious which files are individual and which files are owned by the company. The company has complete control over the shared team folders but your individual Dropbox account remains separate and private.

Team folders were the important step to make Dropbox competitive with Box for businesses. Now the companies are competing on smaller features. 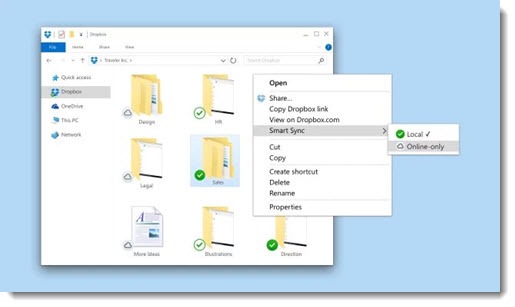 The second new Dropbox feature is just rolling out now to address the sync problem. We’ll talk more about this later but the basic problem is easy to describe: if all the company files are stored online in Dropbox, you do not want to sync them all to your computer. We have to get past the idea that all Dropbox files are in the magic Dropbox folder on our hard drive. But old habits die hard and most of us are not comfortable browsing through files in a web browser on the Dropbox website.

Dropbox is introducing Smart Sync for Dropbox Business customers. (I can imagine that it might be added someday for all Dropbox accounts but no word on that for now.)

When Smart Sync is turned on for a business account, all of the files stored online in Dropbox are listed in File Explorer, even if they are not synced to your computer. You can browse through the complete file list in the magic Dropbox folder, almost exactly as if all the files were stored on your hard drive. The online files will have a special cloud icon. If you click to open one, Dropbox will immediately download it to your hard drive and begin syncing it. You’ll work with it completely normally and it will be synced online just like any other Dropbox file.

It’s a clever solution to the problem. Employees will immediately be comfortable because there’s no learning curve. Files are accessed using familiar moves.

It’s worth noting that there’s a limitation on searches. You can search for file names in the Smart Sync folders, but you can’t search the contents of the files, as you can with files that are stored on your hard drive or on a local server. That’s a significant limitation but all the services have the same problem. Eventually we will become familiar with searching for files in our browser and opening them from the websites for these services. Smart Sync is a good workaround for now.

Box takes a different approach that works almost as well. Box Edit is a small program that makes the experience seamless of opening and editing files directly from the Box website. No need to sync the file, just click and start working, then save it back online automatically. Dropbox does not yet have anything quite like that. And Box provides an add-in for the Office programs and Acrobat that allows all of the files stored online with Box to be browsed from the File / Open and File / Save dialogs in Word, Excel, Powerpoint and the rest, regardless of whether those files are synced to the local hard drive or not.

Finally, the third new Dropbox feature, a collaboration tool named “Paper,” is aimed more at larger businesses. Paper is an app for creating and collaborating on documents in a browser or in mobile apps. Although it can import files in some Microsoft Office file formats, it really represents the trend that will eventually make the Office file formats just another alternative rather than a business standard. A new generation  has no loyalty to the Office programs and is happy to work in Google Docs – or Paper, or Box Notes, the similar feature introduced by Box a week earlier.

It’s an interesting time for Dropbox and Box, which are competing hard. If you’re interested, this article takes a deeper dive into the comparison of features and admin tools. Both services are expensive but easy to justify if one of them helps you get rid of the server in the closet.