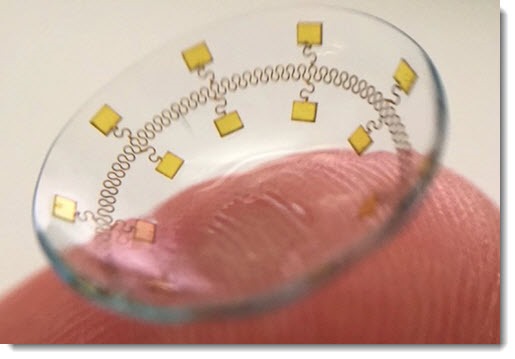 Smart contact lenses are coming. There are no products on the market today and no one can predict how quickly the technology will be ready for public use, but it may be sooner than you think.

If the technology can be developed, smart contact lenses have the potential to solve what I call the interface problem. We can miniaturize more technology every year but we are limited by the interface, the surface that provides information to us. We spent the first couple of decades of the technology age reading information on large monitors. Starting ten years ago, we discovered that four to six inch screens can display useful amounts of information, and almost everyone in the world now carries a device in their pocket with a four to six inch screen. The problem is that smaller displays can’t display enough information to be very useful. Watches with a screen that’s an inch or two across aren’t really good for anything except notifications, which is why Apple Watch and various Android watches have not taken off in any meaningful way. Google Glass was one of the first public attempts to project information on eyeglass lenses; although it was not a very compelling product, I expect much more to happen with glasses in the next few years.

Microsoft is developing the Hololens, which will allow an overlay to be displayed on top of the real world: augmented reality. Imagine that your route is marked with blue arrows on the road, visible only to you. Or a tag appears over people’s heads with their name and a bit of info about them. You could see furniture in your home or see yourself in new clothes before you buy. Games can be built around your real world surroundings; Pokemon Go was an early example. Magic Leap is a company valued at almost five billion dollars based only on the hope that it can develop new technology to bring augmented reality to the masses. At the moment Microsoft Hololens is a set of bulky goggles, and Magic Leap was embarrassed when a photo emerged recently of a huge backpack required to make its prototype goggles work. These are early days and the technology will rapidly improve; in a year or two, that technology might fit in a standard eyeglass frame.

The next step is easy to imagine: shrink the goggles down to a set of contact lenses that can add things to our field of vision without having to wear anything distracting. And sure enough, there are serious efforts already in progress to bring that science fiction future to life.

Google has been working with Swiss drug maker Novartis to make contact lenses that can measure glucose levels and provide immediate feedback to diabetics. The lens has a microchip and an antenna that can transmit to a smartphone app. Although the lens is now delayed, the reason seems to be problems on the medical side (tears apparently aren’t a sufficiently reliable way to measure blood sugar); the idea of embedding a microchip and antenna in a contact lens seems to be technically feasible.

Sony has patents for contact lenses that can record video and take pictures activated by eye blinks.

The military is interested in night-vision contact lenses, using graphene to detect light into the infrared spectrum. Researchers recently succeeded in depositing a layer of graphene one atom thick on contact lenses.

Samsung has at least begun to explore smart contact lenses that can present augmented reality on top of the real world as well as taking pictures and video.

Apple’s Tim Cook has been talking incessantly this year about the importance of augmented reality, leading to endless speculation about the possibility of AR features in the upcoming iPhone 8. There are many rumors that Apple has been talking to EPGL, a company developing smart contact lenses that can connect to apps on iOS devices.

Like so many things, we might be living in the science fiction future sooner than you realize. We live in exciting and scary times.