Google Gboard For iPhone: Swiping Is Better Than Typing 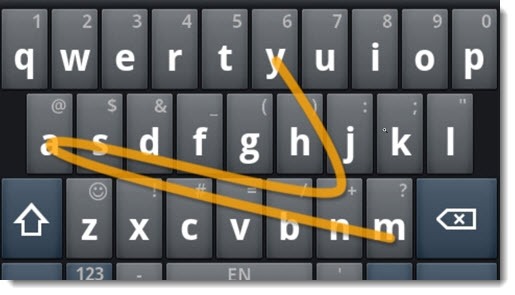 Have you started swiping instead of typing? Old news for some people, perhaps an eye-opener for others. Sure, your thumbs can dance like hummingbirds over your phone keyboard but there’s an even faster way to type messages. Let’s talk about phone keyboards, then take a look at Google’s iPhone keyboard, which raises the bar and makes it perhaps the best iPhone keyboard yet. It’s got some new features that the others don’t.

Your phone comes with a default keyboard from Apple or Google, of course. They’re quite good now but it’s worth knowing that you can install different third party keyboards and switch between them. (Once you have other keyboards installed, switch between them by tapping on the globe icon in the lower left.) The best known alternative mobile keyboards are SwiftKey and Swype. Both of them have an extra feature that the iPhone keyboard does not yet support: instead of typing each letter, you can rest your finger on the first letter of a word, then slide your finger from one letter to another, lifting your finger after the last letter. In the above picture, the finger starts on the “m” key, then swipes through “a” and “n” before being lifted at “y.” The result: the word “many” appears in the message. The keyboards use smart algorithms to guess what word you intended to type – and they get it right a shocking amount of the time. Once you get used to swiping words, you can enter text even faster than typing individual letters.

Two  months ago Google replaced the default Android keyboard with Gboard. If you have an Android phone, you’re using Gboard. It supports “Glide Typing” and a number of other features – more about those below. Today I don’t know any important reason to switch keyboards on an Android phone.

Since the Apple keyboard does not support swiping gestures, custom keyboards have always been popular on iPhones. SwiftKey and Swype have been around for years. Google originally introduced Gboard for iPhones several months before Gboard was available for Android phones, for some reason. It was immediately a strong competitor. But an update last week lifts it above the competition and arguably makes it a better choice than Apple’s default keyboard. Click here to see Gboard in the Apple app store.

Gboard supports “Glide Typing,” of course, with the same accuracy as SwiftKey, Swype and the rest. But last week’s update added a little microphone on the space bar. A long press on the Gboard microphone opens a screen that takes dictation, one sentence at a time. That makes Gboard the first and only iPhone keyboard that supports dictation in addition to swiping and tapping. Google found a workaround for Apple’s locked-down infrastructure that prevented third parties from accessing the microphone.

Gboard features a Google logo above the keyboard. You can tap on it and do a Google search without leaving the screen where you’re typing. In the  middle of an email, you can look up a restaurant, copy its address, and paste it into a message without ever leaving your app.

If you press and hold anywhere on the keyboard (“3D Touch”), the keyboard turns into a kind of touchpad. You can move your finger from left to right and the cursor will move from left to right in the message. It’s far more accurate than playing whack-a-mole with taps on the message trying to get the cursor to land in the right place to correct a typo.

If you’re under 30 or easily amused, there’s a new emoji button next to the space bar, not shown in the above picture. Tap on it and you’ll get the usual collection of hundreds of stupid emoji. To make it worse, you can do a Google search for just the right emoji, selected from the 17 million emoji available online. But wait, there’s more! Animated GIFs – a built-in collection! And you can search thru gazillions more online, right there in the keyboard! Golly! Just looking through them makes me feel old. But you illiterate young’uns will appreciate them, I’m told by the staff at my treatment center.

There’s one more thing that is perhaps my favorite Gboard feature. A long press on the period brings up a menu with commonly used punctuation. No more tapping on the 123 key and hunting for question marks and exclamation points. It quickly becomes second nature to hold the period for an extra beat to get the default question mark, or swipe to a comma or quotation mark. Hey, I use punctuation marks when I write messages. Even text messages. My kids make fun of me. Did I mention that I was old?

A couple of things that are worth noting about Google Gboard for iPhones. 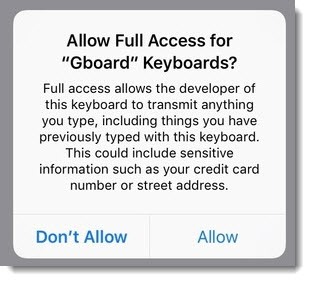 •  Privacy  Gboard does not require signing in with a Google account. When you install it, you will see the scary warning above – “Full access allows the developer of this keyboard to transmit anything you type.” Calm down! You’ll get the same warning if you install any third party keyboard. Google’s privacy statement about Gboard specifically says it is not sending your keystrokes back to Google and it is not adding any information to your Google profile. If you do a search from the keyboard, the search is sent to Google, of course, but it is not associated with your Google account. Similarly, dictation is sent to Google for transcription but again, it is not associated with your Google account.

•  Apple keyboard  The Apple keyboard will reappear any time you are required to type a password. Apple insists on that for security. You should be returned to your choice of keyboard once you have moved past the password prompt.

•  (null) bug  There’s a bug in Gboard right now. When it is updated, you may not be able to switch back to it. When you click on the globe icon to switch keyboards, it appears in the list as “(null) – Gboard.” In my experience, the only way to restore Gboard is to shut down and restart the iPhone. It has then worked normally for me. Your mileage may vary. Updates have been coming thick and fast for the last week so I’ve had to restart my iPhone three or four times recently. It’s not a bad problem as long as you remember the fix.

Try Gboard on your iPhone! It’s free. Look for it in the App Store. Try gliding through a few words. You might like it.