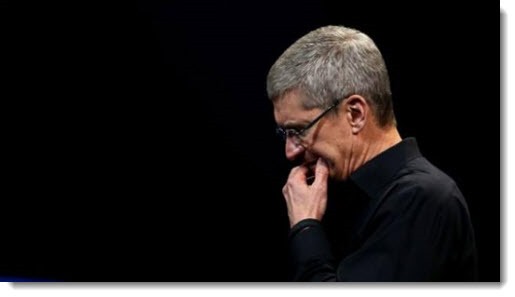 These two things are true.

Apple’s revenues in fiscal 2016 from selling computers were more than twenty billion dollars. That makes Apple’s computer division almost as big as HP or Lenovo, and far more profitable than either of them.

Apple’s revenues in fiscal 2016 from selling phones and tablets were more than two hundred billion dollars. That makes Apple’s computer division a footnote on the Apple spreadsheet. Apple is acting as if that’s the more important fact.

Sure, the computer division is an important footnote, not to be ignored, bigger than many other companies – but Apple’s focus is firmly on the products running iOS, primarily the billions of iPhones that have made Apple the largest company in the universe.

Big companies do not let divisions die overnight. Apple will continue to release Mac desktop computers and laptops for years. They will claim to be innovating and releasing The Best Mac Yet™ every year. (Have you realized what a meaningless phrase that is? Not just for Apple, for any company. Every new version of a product had better be the best version yet or what is the company doing?)

The chart above from Data Visualizations shows the change in Apple’s revenue mix over two decades. Macs are a shrinking and declining wedge. Part of the reason is outside Apple’s control: the overall computer market started a steady decline five years ago. Nothing is likely to change that long term trend. But Apple is not even making a very good pretense of trying to generate excitement and rekindle Mac sales.

Late last year, there was an extraordinary pair of press conferences. Microsoft introduced Surface Studio, an all-in-one desktop PC aimed at creative professionals. It has an innovative form factor that allows it to lie down almost flat for use as a drafting table with precise drawing tools on its touchscreen, plus an interesting and useful dial. The design is elegant, simple, clean – very Apple-like, to be honest. Artists and architects went nuts. Everything about the Surface Studio makes it seem like something that should have an Apple logo on it – but it was Microsoft onstage.

The next day – the next day! – Apple introduced its long-awaited refresh of MacBook Pro laptops. After years of delay, the new MacBook Pro models were . . . dull. Apple continues to have a philosophical objection to touchscreens on its computers, so it showed off a bizarre touchscreen strip at the top of the keyboard that caused a lot of headscratching and zero excitement. Creative professionals, artists and architects, the group that we’ve been trained to think are Apple’s core audience, reacted to the new MacBook Pros with emotions ranging from boredom to irritation. Their migration to Windows – which, frankly, is where all the creative programs are – accelerated a bit.

An article by a developer about “Why I Left Mac For Windows: Apple Has Given Up” was widely circulated yesterday. “I realized I’m so damn tired of Apple’s sheer mediocrity in both laptops and desktops, and started actually considering trying Windows again.” My sense is that this is becoming a widespread sentiment. An editorial yesterday for Apple Insider responds with arguments for the continued relevance of Macs but too much of it hinges on what-if possibilities that seem unlikely: What if Apple licensed MacOS to other manufacturers? What if Apple partnered with HP? What if Apple brought iOS apps to Macs? What if, what if?

In December Bloomberg reported that Apple has dismantled the software engineering team working on MacOS, folding it into the iOS team. “Interviews with people familiar with Apple’s inner workings reveal that the Mac is getting far less attention than it once did. They say the Mac team has lost clout with the famed industrial design group led by Jony Ive and the company’s software team. They also describe a lack of clear direction from senior management, departures of key people working on Mac hardware and technical challenges that have delayed the roll-out of new computers.”

MacOS (formerly OS X) has been allowed to stagnate, getting only minimal updates for the last couple of years at least. It gets scraps from iOS like Siri but few new features and certainly nothing innovative.

Meanwhile Microsoft has been improving Windows 10 and adding new features nonstop. I have complaints about Microsoft and Windows 10 – oh, lord, do I have complaints – but it is indisputable that Microsoft is innovating and trying to create magic in desktop computing. In addition to the basic work of making Windows 10 fast, compatible and secure, Microsoft has now added support in Windows 10 for Linux; has steadily improved Windows 10 gaming features; is building a platform for augmented reality and incorporating it in Windows 10; and has finally convinced manufacturers to release a wide variety of exciting desktop, laptop, and convertible PCs. If you’re shopping for a new laptop and you can spend $1,000-$1,500, you have a wonderful selection of PCs and, well, you don’t have a Mac, because there is no reasonable Mac in that price range. You might be able to afford an iPad Pro, but that would be a foolish way to spend your money. If you have $1,600-$2,500 to spend, you could afford a MacBook Pro but you would get a better laptop if you bought one of the $1,200 PCs and kept the change.

And then there’s schools, and that’s where the story gets really dire for Apple. A generation is growing up using computers as a daily educational tool, and those computers are not Macs. They’re not even iPads.

A study by FutureSource shows operating system share in schools for the last three years in the US, with a surprising and very dramatic shift. 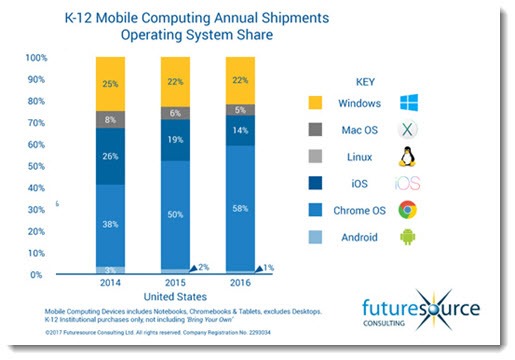 Chromebooks have taken over the US education market. Windows is diminished but holding steady. And Apple is being squeezed out of sight.

The New York Times took the same numbers and created another visualization that highlights the startling rise of Chromebooks in US education. School administrators can buy three Chromebooks for the cost of a single Mac. Chromebooks beat out Windows PCs and Macs on price, usability, the ease for students of swapping from one device to another, and Google’s effective dashboard for school administrators. 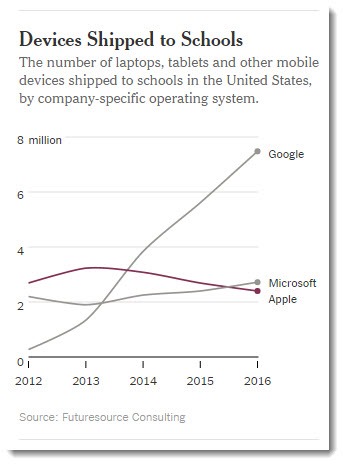 That’s not the whole story, though. About half the education market is outside the US, and the numbers are quite different – although one conclusion is the same. 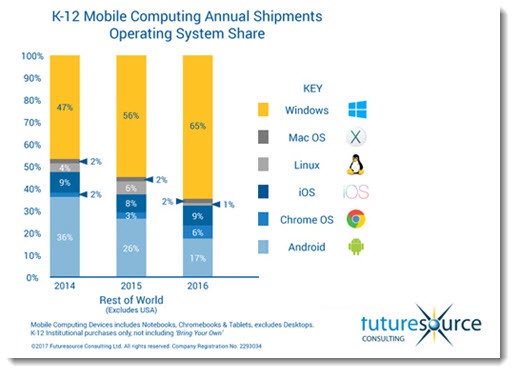 In the rest of the world, Windows is gaining market share in schools at a rapid pace. Chromebooks are growing but very slowly so far. And Apple is being squeezed out of sight.

The education market will likely be volatile. Microsoft is preparing a low cost version of Windows, in part to try to challenge Chromebooks in education. It hopes to arrest the growth of Chromebooks in the US and try to cut off Chromebooks before they gain momentum in schools in the rest of the world. Apple cannot compete in schools. I can imagine that it might release an iPad Pro that resembles a laptop with a real keyboard (and that might be a pretty appealing product), but it cannot compete with the low prices of Chromebooks and cheap Windows laptops. Cash-strapped schools are not going to spend two or three times as much for a laptop just to touch the Apple magic.

Apple has given up on computers. Apple will deny it. There will be announcements and new products and Apple will attempt to generate excitement. That’s what big companies do to extend the life of dead products. But step back and it looks like Apple is focused on iPhones, iPhones, iPhones. And why not? That’s where the sales are, that’s where the profits are, that’s what people are interested in. Apple will pretend to care about the Mac when it’s convenient and seems ready to ignore it the rest of the time.