Windows 10 And The Slow Devices And Printers Window 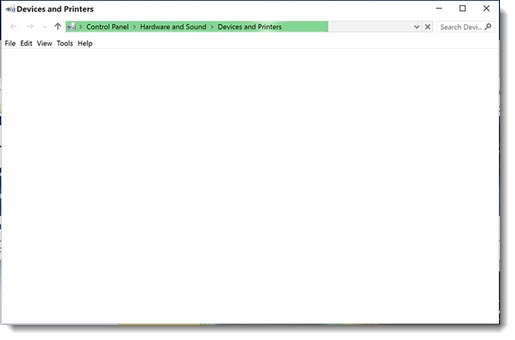 Here’s a problem without a solution.

On some Windows 10 computers, some of the time, opening the Devices and Printers window in Control Panel takes anywhere from 90 seconds to five minutes. The green bar creeps across the empty window, as you see in the screen shot above. Eventually it finishes. By that time, though, you have probably left and gone to lunch, possibly after punching a screwdriver repeatedly through the front of the computer.

It’s maddening. It seems to have gotten worse since the Anniversary Update for Windows 10, the big update that your computer got somewhere between August and December. There’s no pattern to it and no simple fix. The same computer might open Devices and Printers slowly one day and pop open the next day.

The old school Devices and Printers window in Control Panel is still the best way (and in some cases the only way) to resolve printing problems. When a print job gets stuck, or the computer loses its connection to a printer on the network, a trip to the Devices and Printers window is required to check the printer properties and clear print jobs. Microsoft is slowly moving printer controls to the Windows 10 Settings menus but there’s not much there yet.

Waiting five minutes for a printer icon is the teensiest bit frustrating.

Some people never find an answer.

The most frequent solution involves Bluetooth settings, for some reason. If Devices and Printers opens slowly and you want to tinker, go to Windows 10 Settings / Devices / Bluetooth and try turning Bluetooth off. If it’s off, turn it on. There are reports of success going both ways.

Obviously, don’t disable Bluetooth if you’re using Bluetooth devices with your computer. You knew that, right?

If that doesn’t change anything, leave Bluetooth off but try one more thing. Click on Start, type in services.msc and hit Enter. You’ll see several Bluetooth services. Highlight each one and make a note of the “Startup Type.” Then click on “Stop the service” in the upper left for each one. See if that changes the way Devices and Printers starts up.

If you think that fixes your problem, you can double-click the Bluetooth services and set them to Disabled. But keep those notes about “Startup Type” in case you want to put them back to what they were. 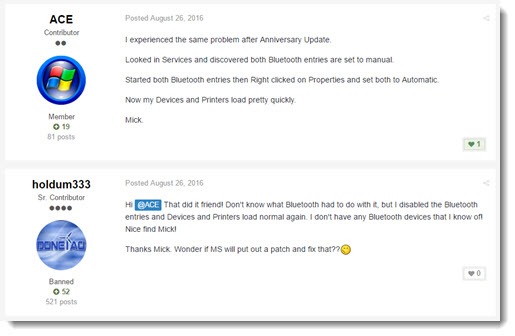 Naturally there are lots of reports from people who found the Bluetooth settings made no difference. Some people have fixed the problem by going into Devices, turning on the display of hidden devices, and uninstalling all non-active devices. Others say that makes no difference.

There are lots of suggestions from well-meaning people to run a Windows 10 command that scans system files and updates any critical missing files – sfc /scannow  It doesn’t seem to have any effect on this problem but it creates the illusion of progress.

Here’s someone who’s sure that it’s the accumulation of “generic volume shadow copies.” I’m not sure anyone else believes that.

Driver problems? Bad NIC? Printers that are asleep? Wireless printers? Audio driver? All have been floated as possible causes.

It’s just one more little maddening thing about Windows 10. It’s a wonderful operating system in so many ways, but it’s very easy to be disheartened and lose faith when we’re left drumming our fingers because of a bug.

Just wait for the window to fill in. And try to keep your hands away from the screwdriver.