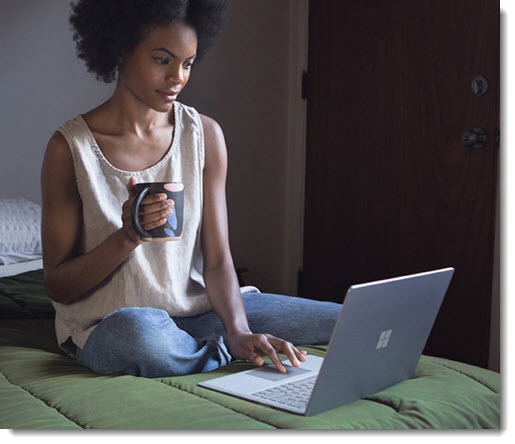 Next month Microsoft will begin selling Surface Laptops, elegant and sexy, Microsoft’s first Surface devices with a traditional clamshell design. You’ll be tempted to buy one, but in the end you won’t. Almost no one will buy  them. Microsoft will sell some Surface Laptops, of course, but sales volume will be insignificant – no shame but no bragging rights.

There are two problems with the Surface Laptops. Either of them is sufficient to stop people from buying one. The combination is lethal.

(1) Surface Laptops are overpriced and under-featured compared to other premium laptops. Microsoft made some puzzling design choices and Surface Laptops do not compare favorably to the competition.

(2) Surface Laptops will be sold only with Windows 10 S, the limited version of Windows that does not run any traditional Windows programs, including Chrome. Microsoft’s is desperate to force Windows 10 S into the market whether we want it or not. Microsoft needs Windows 10 S to succeed. The sad reality is that we don’t need Windows 10 S. Making Windows 10 S the only option on a premium laptop will at best cause consumer confusion, and at worst be seen as actively customer hostile.

I hope it’s obvious that I take no pleasure in predicting failure. I love Microsoft. I’ve sold and supported Microsoft products and services for 25 years. I sympathize with the tough problem of competing in a changing world. Maybe the world will swoon and Microsoft will sell millions of Surface Laptops and Satya Nadella will call me a twit.

But I doubt it. The Surface Laptop is the wrong product with the wrong features in 2017.

Surface Laptops are overpriced and under-featured

Surface Laptops are Microsoft’s first computers that compete directly with laptops already on the market from other manufacturers.

A few years ago, the original Surface tablets with detachable keyboards were inspirational. Now there are many copies on the market but the design was revolutionary when first released.

Microsoft’s second Surface portable, the Surface Book, is very expensive because of its unique design: it is a powerful laptop with a traditional laptop keyboard, and it is also a powerful and functional tablet when the screen is removed from the keyboard. There are no direct copies because it turns out almost no one wants that 2-in-1 combination, especially at its stratospheric price, so the Surface Book continues to be a product with no competitors.

That’s not the case for Surface Laptops. They are thin and light laptops with a 13.5” display. Obviously the design is sexy – go take a look at the pictures. Microsoft is taking aim at Apple and specifically the MacBook Air, whose trailblazing elegant design has now been widely copied and which Apple is more or less ignoring, creating this opportunity for Microsoft.

Just as obviously, though, there are other beautiful premium laptops on the market. Microsoft is competing directly with laptops like the Lenovo Thinkpad X1 Yoga, HP Spectre X360, Dell XPS 13, and the others I called out in this article. All of them are thin and light and elegant and sexy. Surface Laptops look good but they’re not on the virtual store shelf by themselves. They’re displayed next to all the other premium laptops. Once you’ve compared them all, you’ll pick one of the others.

Start with the price. Unfortunately Microsoft starts the lineup with one underpowered model so it can advertise, “Starts at $999!” No one should buy the thousand dollar model. It has a 128Gb hard drive and only 4Gb of memory. Neither of those are good choices.

Realistically, then, most people will want the upgraded model: $1,299 for a Core i5 processor, 256Gb hard drive, 8Gb of memory, and a choice of colors.

The price goes up from there. Microsoft is also offering two more models with Core i7 processors and upgraded graphics, reaching a dizzying $2,199 for the top of the line model. I know there are a fair number of people with so much money that the price is irrelevant, but there is no reason for the rest of us to go there.

Guess what? All three of those competitors are 2-in-1, so the cover can fold back and the laptop can be used in tent mode on a cramped airline seat table, or folded back completely to use as a tablet. The Surface Laptop can’t do that.

All three of the competitors have USB-C ports, the future of connected peripherals and a basic requirement for a laptop that you expect to use for several years. The Surface Laptop doesn’t have a USB-C port. In fact, it only has one port of any kind, a lonely USB 2 port.

At this point you’ll start to nitpick. The laptop on the Surface Laptop is covered with felt. Will it hold up over time? Will it wear down, or get dirty, or develop smooth spots where your hands rest on it? No one knows. You don’t know. But you don’t have to worry about that with the competitors.

(Microsoft calls it “Alcantara.” It’s actually a durable material but every time someone said that during Microsoft’s press event, all I heard was Ricardo Montalban cooing about “rich Corinthian leather” in 1970s Chrysler commercials.)

No 360-degree hinge, no USB-C port, a price that’s higher than comparable laptops that offer those features. Hmm.

Then there’s the operating system.

You buy the Surface Laptop and get it home and open the box. It’s beautiful! You turn it on. It’s fast. The screen is gorgeous. You’re happy.

So you head to Google to install Chrome, the program installed first and most often on Windows computers around the world.

You head back to the Surface Laptop website and scroll down four or five screens until you see this. 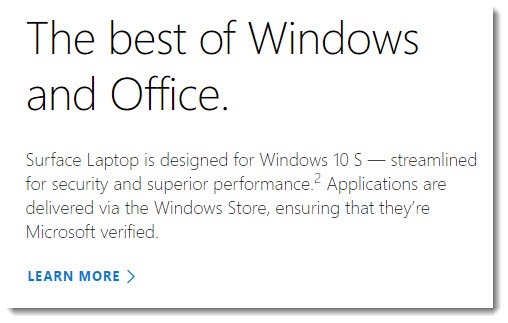 “Applications are delivered via the Windows Store, ensuring that they’re Microsoft verified.” That’s it. That’s your warning about an operating system that is not what you expect in any way.

If you click on “Learn more,” you’ll get to a page about Windows 10 S. Three or four screens down is this explanation.

You’d Google for more information if you could, but your new Surface Laptop uses Bing by default, so you eventually discover on Bing that you can upgrade the Surface Laptop to Windows 10 Pro for free through the end of 2017, and for $49 after that.

If you’re not fully informed before you buy, then your first experience with a $1,300 Surface Laptop will be learning that you have to do an operating system upgrade (possibly at extra cost) to get the computer you thought you were buying.

Microsoft is hinting (but cannot say) that your choice is between security and stability, on the one hand; or doing a Google search, on the other hand. It will be hard-pressed to sell that message without trashing Windows 10 Pro, which it can’t do.

This is all based on Microsoft’s feelings of inadequacy and hurt feelings that we are moving to different platforms. Windows is in decline. Big companies don’t like declines.

Microsoft has a vision of the future. In Microsoft’s vision, we are inspired by the idea of a version of Windows that is simple and secure. We love the Edge browser. Bing makes us smile and clap our hands. We buy Surface Laptops by the millions. Schools buy oodles of cheap Windows 10 S computers. Developers are inspired by our enthusiasm and they begin to develop updated versions of programs we love so we can install them on Windows 10 S through the Windows Store. We are patient and we use our Windows 10 S computers for a few years even though they don’t do much because we believe, hallelujah, we believe!

Paul Thurrott puts it this way: “Surface Laptop is a peek at our collective future, a decisive step towards ridding us of the pain of the Win32 desktop mess that has been holding back Windows for years. Surface Laptop isn’t a me-too knockoff, just another laptop. It is the opening salvo in the most important battle that Terry Myerson’s Windows business will fight in the years ahead.”

There are a number of problems with that vision, but one of them is glaring: Microsoft can’t pull it off. It has to get through the initial period of customer confusion and make its goals crystal clear to sell the vision. It has to communicate clearly and unambiguously what customers should expect from Windows 10 S. Microsoft isn’t capable of doing that. Want some evidence? Two bits of evidence.

(1) This is exactly the same position that Microsoft was in when it introduced the first Surface tablets running Windows RT, a limited version of Windows that only ran apps from the Windows store. Windows RT was a huge, embarrassing failure, in large part because Microsoft did not explain clearly what the new OS would and would not do.

(2) The above screen shot is Microsoft’s comparison today of the three versions of Windows 10. Windows 10 Home has “support for non-Windows Store apps.” Windows 10 S “works exclusively with apps from the Windows Store.” Do you know what that means? Of course you don’t.

Engadget put it this way: “Microsoft has a giant task ahead of it in explaining why these new machines don’t work like Windows laptops. Clear marketing and in-store messaging will be key to making 10 S a success.” Think that screen shot shows the “clear marketing” that will accomplish the task?

Microsoft desperately needs Windows 10 S to succeed because it might jump-start Windows development and extend the life of Windows for a few more years.

But you don’t need Windows 10 S. If you want a simple, secure lightweight operating system, you’ll get a Chromebook or an iPad.

Surface Laptops restrict your choices in a blatant attempt to prop up Microsoft’s faltering browser and search efforts, and to try to help Microsoft reach business goals that aren’t important to you. I don’t think Microsoft will realize its grand vision and bring us to that restricted Windows garden. I don’t think people will buy Surface Laptops.

Watch the market for the next year. Let’s see if Microsoft can pull off a miracle and prove me wrong.