Peeking Behind The Scenes At Spotify & The Music Industry 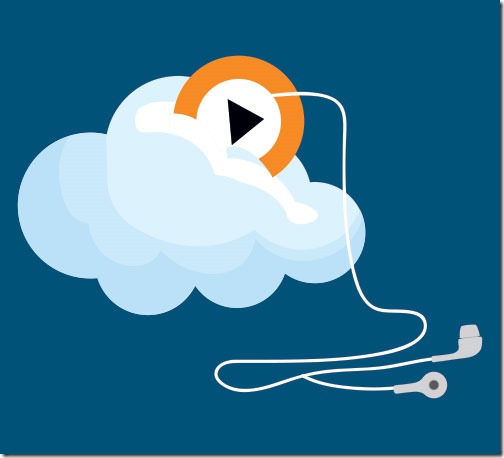 Let’s call them “record companies.” A bit of an archaic term, but that’s the familiar name for Universal, Warner, Sony and a few others – the businesses that continue to stand between artists and the public, demanding a huge cut of revenue from music recordings and performances. Their boneheaded attempts to deny the reality of the Internet and digital music almost made them irrelevant during the ten years after Napster emerged. There was a glimpse of a future where artists might have a closer relationship to fans and keep more of the money from their creative efforts. Before that could happen, the record companies clamped down hard and they still control the pipeline that feeds into the streaming music services.

It turns out record companies did not just control distribution of CDs. They also control the back catalogs which are an important part of what we want to hear. Spotify can’t sign deals directly with artists for fear of losing the rights to the back catalogs. Spotify and the other services don’t have quite enough leverage to change the structure of the industry.

The result is that music industry revenues are on the rebound, rising significantly in 2016 for the first time in a decade. And in 2016, for the first time, music streaming companies were responsible for more than half of record companies’ revenue, according to the Wall Street Journal. Industry officials continue to complain bitterly about how unfair it is that the Internet exists; “our recovery is fragile and fraught with risk,” whines RIAA Chairman Cary Sherman. The reality is that record companies have strong-armed their way back into their pre-Internet position, relying on absurdly long copyright terms and long-term licensing deals to control back catalogs and require similar deals from new artists, continuing to be the gatekeepers that control much of what we hear and profiting far more than artists from the revenue that is produced when we listen.

Spotify creates playlists. Spotify creates lots and lots of playlists. I am tremendously fond of the algorithmically created playlists like Discover Weekly, Release Radar and Daily Mix that take my musical tastes and give me a constant stream of music that I might like. It’s great technology.

As Spotify becomes more popular and gets a hold on more users, its front page – the “Browse” page – becomes more valuable. And as you’d expect in a world of Big Companies chasing Big Money, the record companies are buying and cajoling and wheedling and forcing their way into Spotify playlists and onto that front page.

If you look closely at Spotify playlists, you’ll see a small logo in the upper left. Many of them have the Spotify logo, a circle with slanted waves. But some of them have different logos. See if you can find “Filtr,” “Topsify,” and “Digster.” Guess what? Filtr is owned by Sony. Topsify is owned by Warner. Digster is owned by Universal. Their sponsored playlists are only the tip of a large iceberg that represents the relationship between Spotify and the major companies. 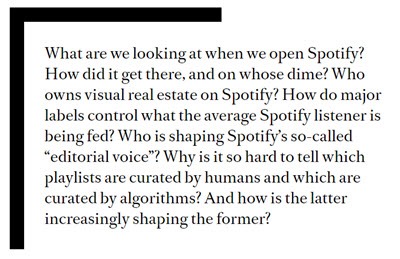 Spotify wants our loyalty so it can control our access to music, basically joining the record companies as an additional gatekeeper between you and artists. Building our trust requires Spotify to make itself tremendously likable, providing access to music in a way that seems magical and that causes us to want to use it. It has been successful at doing that. It’s great! Ten dollars a  month for access to the entire history of recorded music; playlists that are tuned to us so successfully that it seems unbearably quaint to look back at jumping between three FM stations trying to avoid commercials and find something we liked. And we have the illusion of free will, the belief that we are making our own choices of what to play.

On the back end, though, Spotify has to collaborate with the major record companies. Increasingly, that means Spotify is promoting the agenda set by those companies – shaped by our tastes, of course, but also shaped by the same high-pressure sales tactics and backroom deals that got songs played on the radio. As noted in the article about Spotify playlists:

“The major label influence within Spotify is unsurprisingly vast. The majority of the so-called “editorial” content is shaped by Spotify’s relationships with the major labels and if not directly, then indirectly, a way in which they uphold the marketing agreements within their deals. . . . Often on Spotify, even paid subscribers will see front-page advertising takeovers promoting major-label playlisting brands disguised as “announcements” rather than “advertisements”.”

Each of the major labels has employees whose full time jobs are Spotify relations, engaged in a nonstop flow of email, meetings, phone calls, sending marketing materials and keeping Spotify informed about press campaigns and tours. Rolling out a major new album is the culmination of months of planning with Spotify so the new album is flagged on the home page, on the cover of the New Music Monday playlist, featured in an artist playlist, and much more.

Independent artists and labels aren’t shut out of Spotify but they don’t have the leverage to be placed prominently where they will be widely heard. “Any artist can deliver their content to Spotify through a service like Tunecore or CD Baby, but that does not mean all artists have access to being visible to users. This requires the same level of professional, paid-for services that has always been the work of PR and radio promotion companies. For some artists, especially independent artists, this path of communication and access simply does not exist.”

Spotify is magical. I enthusiastically recommend it to everyone. Sadly, though, we shouldn’t make the mistake of thinking that music is being democratized or that Spotify levels the playing field for musicians. Music continues to be controlled by big business, which controls more of what we hear than we realize, then grabs as much money related to music as it can and parcels out as little as possible to musicians. It’s been true for decades: if you’re a musician, you’d better love being a musician, because you’re not doing it for the money. Spotify hasn’t changed that. 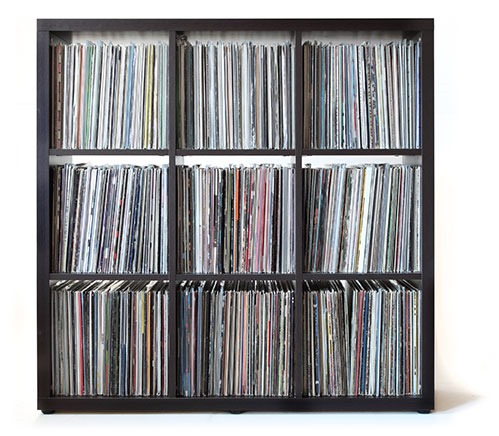 It made me think about a change in my behavior related to Spotify. I’ve been a Spotify subscriber for several years, but at first it was barely flirting. All my listening time was spent with the absurdly large library that I had been curating for more than forty years, starting with LPs and cassettes, moving to CDs, and finally a frenzied ten years of accumulating MP3s – a thousand artists, five thousand albums, fifty thousand songs, all carefully tagged and much loved.

In the last two years, I’ve barely referred to my collection. I listen to Spotify.

Maybe you’re going through the same process. The convenience of opening a single app and having saved albums and playlists waiting is irresistible. The longer it goes on, the more we are locked into Spotify. Theoretically we could quit Spotify any time and fall back on our library, but that becomes less likely all the time. Our libraries will have holes from the Spotify years. Maybe we’ve lost track of the MP3 files. Maybe we no longer have the program that played them, or we can’t quite remember the steps to get music onto our phones. When you became a Spotify subscriber, there’s a good chance you were making a permanent change.

Spotify isn’t a problem that needs to be solved. Far from it! It’s one of the best things that technology has done for our modern world. I wouldn’t give it up for a second. But it’s interesting to look at what’s changing – and what’s staying the same. Enjoy the tunes!