Now that you’re finally getting the “Creators Update” for Windows 10 – you know, the one that was “released” in April – you might have seen the above window appear in the lower right corner. “You need to fix your Microsoft Account for apps on your other devices to be able to launch apps and continue experiences on this device.” In fact, some people are getting that message over and over and over and over until they want to scream.

(Added 06/2018: If you want to turn off the notices, go to Settings / System / Shared Experiences and set the slider to OFF for “Share across devices.” You won’t miss it.)

Personally, I’m so paranoid these days that my first thought was that I had picked up a virus, because I’m pretty sure I don’t want to allow other devices to continue experiences on my computer. But I did the research and I’m here to reassure you: rest easy! It’s a message from Microsoft about a new feature. It must be something great, right? Microsoft thinks it’s so important that it’s bringing up an error message on millions of computers worldwide to make sure it works. Feel the excitement!

When you click on the notice, you’ll be taken to a Settings screen that you’ve never seen before. It’s a new feature in Windows 10 for “Shared Experiences.”

You can go look at it now. Click on Start / Settings and do a search for Shared Experiences. 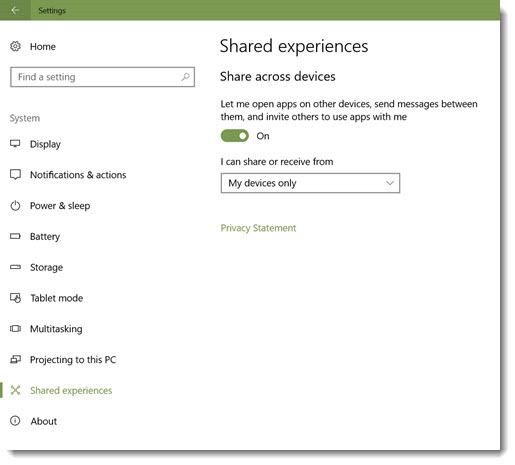 That doesn’t really clear things up, though. “Share across devices. Let me open apps on other devices, send messages between them, and invite others to use apps with me.” Hmm. Didn’t know I wanted to do that. It must be pretty darned important. After all, Microsoft was rather insistent that I should fix my Microsoft account right away, although come to think of it my Microsoft account didn’t seem to really need fixing – nothing had changed and it was doing just fine.

Let’s go right to the heart of it, then I’ll give you a few details.

What can you do with Windows 10 Shared Experiences?

That’s a pretty accurate summary. It appears that it will continue to be the answer for somewhere between the next six months and the end of time. It adds a subtle nuance to the question about why Microsoft annoyed you with a popup notice that looked like malware to fix an account that wasn’t broken.

Want some details? Of course you do.

What are Windows 10 Shared Experiences?

Apple has a feature named “Handoff” that can transfer your work in progress between Mac computers and iOS devices over Bluetooth when they get close to each other. Handoff works with apps that have a relationship with each other on both devices – you can start writing an email in Mail on your iPhone, then pick up where you left off in Mail on your Mac, or send open web pages from Safari on your computer to Safari on your phone. It’s more or less seamless because many people use the default Apple apps on Mac computers and iOS devices – calendar, contacts, mail, notes, Safari, and a few others.

Microsoft created “Shared Experiences” as its attempt to emulate that experience for Windows users. In theory you can push your open web pages from your desktop computer to your laptop, or transfer your work in a program on your computer to the same program on your phone or tablet.

In fact Microsoft is trying to do something far more ambitious than Apple’s Handoff. “Shared experiences” can be synced through the cloud as well as Bluetooth. In addition to syncing your place in an app, it has the potential to turn a mobile device into a remote control for, say, media playback on the computer. There is also the chance to “invite others to use apps with me,” whatever that means.

Microsoft has three difficult problems, though.

(1) Apple users frequently use the default apps on Macs, iPhones and iPads, especially for mail, contacts, calendar, and web browsing. By and large Windows users don’t use the default apps that Microsoft supplies with Windows 10, reducing Microsoft’s ability to set up a seamless experience. Theoretically third party developers can add Shared Experiences to their Windows 10 apps, but (1) nobody will use it so they won’t bother, and (2) developers aren’t writing Windows 10 apps anyway.

(2) Microsoft has virtually no presence on mobile devices in any category except the mobile Office programs – Word, Excel, and Powerpoint. Email? There is a struggling phone app named “Outlook” but it has little relationship with the Outlook desktop app. We won’t be interested in “sharing” our work in progress from a computer if we’re not using a Microsoft-approved app on our phone to receive it – and for the most part we’re not. Web browsing? This is irrelevant if it only works with the Edge web browser on a computer, because we’re not using Edge.

(3) Microsoft isn’t very good at this stuff. Apple and Google are far better at designing easy, compelling user experiences across different platforms. Using Shared Experiences is a bit of a mess compared to Handoff.

Enough with the negativity! The best way to find out what Shared Experiences can do is to try it. What program shall we fire up to see what it’s like to share it?

Yeah, about that. There aren’t any. At the moment Shared Experiences doesn’t, um, work. It’s a placeholder for developers to look at in case they want to build it into their apps. It would be nice to think that Microsoft might build it into the Office programs someday, but that day is not today.

Just a quick recap, then. Microsoft showed you an unexplained error message instructing you to fix your Microsoft account, which wasn’t broken, for a feature that does nothing now and might never do anything interesting ever.