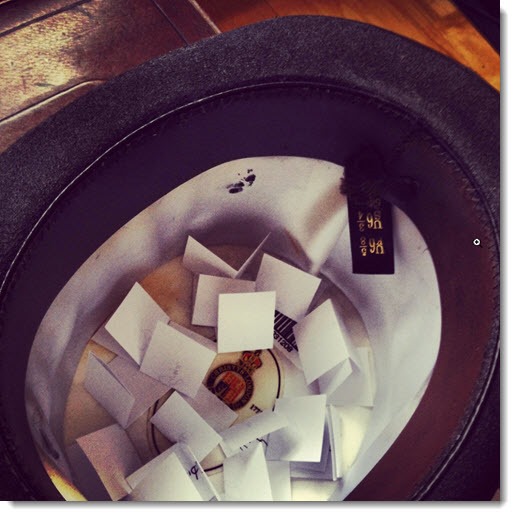 Every month at Microsoft, a team of highly paid professionals writes words on slips of paper. They always include “Microsoft,” “Windows,” “Office,” “365,” “Pro,” “Home,” “Business,” “Enterprise,” “Azure,” “Surface,” and “Online.” They put the slips of paper into a hat and jumble them around. Then they randomly pick out three or four and lay them on a table. That’s how they choose the name of whatever product or service is rolling out that month.

At least I think that’s how it works. I’m pretty sure it can’t be anything else.

You might think that the goal would be to choose names that would help us understand and use Microsoft products. There’s not much evidence of that.

Let me give you some background on Microsoft’s most egregious branding failure, then tell you about some recent examples of names drawn from a hat.

In 2011 Microsoft began to market cloud business services under the “Office 365” name. We already had “Microsoft accounts” but for some reason Microsoft created a completely separate identity system for the business services. We don’t know why. Technical reasons? A sincere belief that it would be easier for us to understand? Whatever the reason, Microsoft decided that hundreds of millions of people would have two different sets of credentials to log into Microsoft services.

There was still a chance for clarity! A “Microsoft account” for personal services from Microsoft, an “Office 365 account” for business – we could have understood that.

But then came the fateful day in 2013 that Microsoft decided to market the Office programs to consumers as “Office 365 Home,” even though the “Office 365” name had only been used for business products to that point. It was one of the worst branding failures that I can think of – in part because the mistake is subtle but the effects are so pernicious. Instantly we had no good way to describe Microsoft’s two identity systems. Microsoft has been struggling ever since, forced to rely on clumsy dialogs asking you to choose between your “work or school account” and your “personal account.” Without clear names, it is almost impossible for non-technical people to understand what Microsoft is up to. Microsoft is inconsistent in its own communications because no one knows what to call anything. 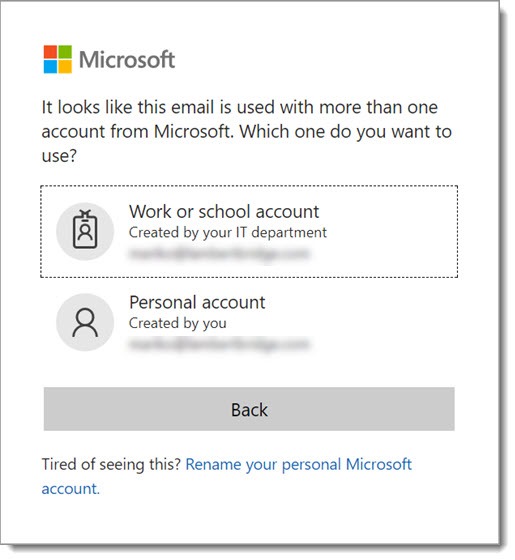 Microsoft knows people are confused about having two different sets of credentials for its services, so last week Microsoft introduced a new sign-in page for many of its services. It’s intended to be consistent across all Microsoft services, both business and personal. After years of work and planning, this is Microsoft’s best effort to help you know what to do when you are trying to log in to a Microsoft service. In the article announcing the new sign-in page, a Microsoft exec says: “Azure AD & Microsoft account sign-in pages will both change to have a consistent look and feel, so you won’t experience any more jarring transitions when you move between the two.” Good news!

You can take a look – you’ll see a prompt to try it out if you go, say, to http://mail.office365.com. It looks like this screen shot. 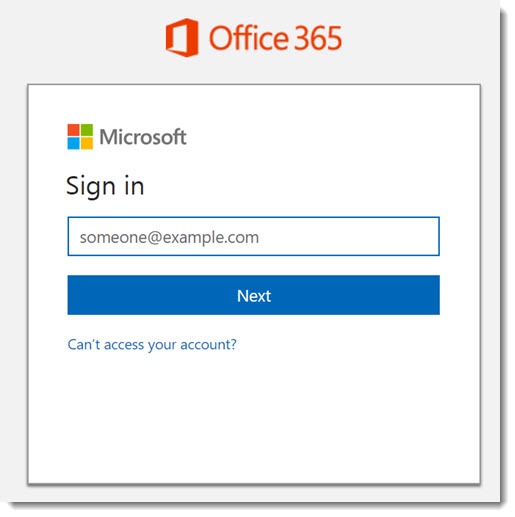 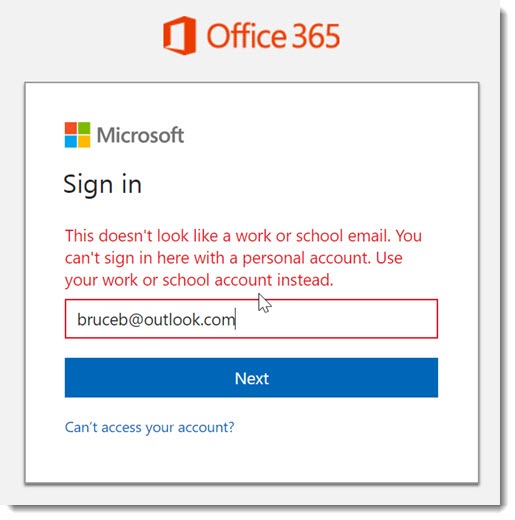 Oops! I guess I won’t “experience any more jarring transitions” because there’s nowhere to go from here.

The new “sign-in experience” means there will be no visual feedback whatsoever on which account should be used on a sign-in page. In this case, “consistency” means “removing information that might help you know what to do.”

There’s another interesting thing in the announcement of the new sign-in screen – it refers to Microsoft’s two identity systems as “Azure AD” and “Microsoft account.” There are a couple of problems with that.

(1)  Sure, it would be helpful if Microsoft consistently referred to its personal accounts as “Microsoft accounts.” Even that’s a bit tricky, though. For example, you’d be confused if you tried to log into webmail and got the error message in the above screenshot – “You can’t sign in here with a Microsoft account.” Business email, personal email – they’re all Microsoft accounts in your mind, right?

(2)  And then there’s “Azure AD.” That stands for “Azure Active Directory.” Microsoft has created a cloud-based identity system that underlies all of its business services, including but not limited to Office 365 business email. It is a 21st century cloud version of Active Directory, the Windows Server service that runs on almost every enterprise network. It’s actually a pretty acceptable choice for clearly branding Microsoft’s business identity system, except (a) non-technical people have never heard the words “Active Directory,” (b) almost no one has heard of “Azure Active Directory,” including IT professionals, and (c) Microsoft itself has not begun using the term Azure AD for its own communications, much less promoting it as the brand name to remember.

The “Office 365” debacle was so demoralizing that now it looks like Microsoft has just given up.

Earlier this year Microsoft introduced “Windows 10 S.” The “S” is literally meaningless – Microsoft refuses to acknowledge that it refers to anything. Windows 10 S is a neutered version of Windows 10 shipping on Microsoft’s new premium Surface Laptops. It is not capable of running any traditional Windows programs. Of course it’s not impossible for an ambiguous name like “Windows 10 S” to become familiar with consumers if Microsoft commits to it and clearly explains it, but that’s not going to happen. Click here for more info about the Windows 10 S trainwreck in progress.

That’s not the only recent Windows branding failure, though.

In July Microsoft announced that it would begin offering two new subscription bundles wrapping up licenses for Windows 10, Office 365, and some security tools. The names of the packages? (Drum roll while slips of paper are drawn from the hat.)

Brilliant! Names that are both confusing AND completely unhelpful. But why stop there? Let’s add a new set of services to “Microsoft 365 Business.” We can call it (drum roll while slips of paper are drawn from the hat):

In a special only-from-Microsoft twist, “Windows 10 Business” is not a version of Windows. According to Microsoft, it is “a set of cloud-services and device management capabilities that complement Windows 10 Pro.”

At this point words have been so divorced from their meaning that they break down into mere placeholders that convey nothing. It doesn’t even surprise anyone that Microsoft announced a new version of Windows 10 this week that will be named (drum roll, slips of paper, yadda yadda):

And Microsoft charges on. Mary Jo Foley discovered that one of the cloud based features in Skype for Business (the enterprise communications platform that has nothing whatsoever to do with Skype) will soon be renamed “Microsoft’s Phone System.” No room for confusion there, right? Perhaps the teensiest bit of confusion, since Microsoft just finished closing down its entire effort to enter the mobile market with its own, umm, phone system.

It’s dispiriting. There is no way I can communicate clearly with my clients. That requires words and brands and consistency, and Microsoft just can’t do that.

Maybe I’m being harsh. Nothing that Microsoft can come up with is as bad as “Tronc,” the new name chosen last year to replace “Tribune Publishing.” So there you go: Microsoft has cleared the lowest branding bar. That can be our rallying cry. “Microsoft – It Hasn’t Named Anything Tronc!”