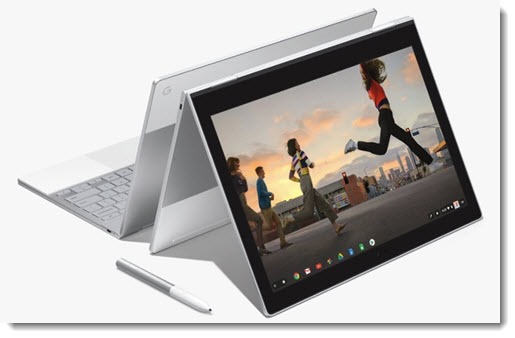 Although I’ve mentioned Chromebooks that cost $450, you need to know that those are the really expensive ones. Most Chromebooks cost between $200 and $400, and you can find some perfectly worthwhile Chromebooks for less than $200.

Cheap Chromebooks will work just fine for casual use. They’re not at all like Windows laptops at the low end. Windows performs miserably with an underpowered processor and not enough memory; trying to use a $250 Windows laptop is an exercise in frustration. Low end Chromebooks handle web browsing just fine, and web browsing is more or less all you’re going to do with a Chromebook.

You can buy a cheap Chromebook with confidence. If it doesn’t work for you or if it breaks because it’s made cheaply, it won’t hurt much if you’ve only invested $250. But let me give you a few shopping tips that might cause you to spend a bit more, then mention a few specific models.

Android apps  Chromebooks released in 2017 will be able to run Android apps, the same ones you run on your Android phone. Support for Android apps is still being added and not all devices qualify, especially low end and older models. (It’s also still a work in progress, as bugs are squashed and developers rewrite apps to provide better full screen support.) It’s a feature that you might want. Make sure the Chromebook you choose supports Android apps or is scheduled to be supported in the future.

Display size  Many inexpensive Chromebooks have small screens, 10 or 11 inches. Make sure you’re happy with the screen size before you order! 12 inch screens are typical on the best Chromebooks, still smaller than many Windows laptops. If you want a bigger screen, you can find it but it may take a bit of digging.

Processor, memory & storage space  Many casual Chromebook users will not strain a low end processor and 2Gb of memory, but performance will definitely improve with 4Gb of memory and a better processor. That will be particularly noticeable if you are in the habit of having 10-20 Chrome tabs open at the same time, or if you’re streaming video, or if you wind up running intensive Android apps. Most Chromebooks run on ARM processors; only high end Chromebooks run on Intel processors. No one other than power users will notice the difference between a decent ARM processor and a more expensive Intel processor.

Storage space of 16Gb will be adequate for most people but getting more will provide some breathing room if you start downloading Netflix or Amazon videos to watch offline or installing Android apps (games, say) that require storage space.

Size and elegance  As you’d expect, cheap Chromebooks will be made of cheap components and they’ll look a bit toylike and ungainly. The more expensive ones are as thin and light and elegant as the best Windows laptops.

The Chromebook market is changing fast and new models are appearing constantly. Here are a few of the models to consider in October 2017.

Samsung Chromebook Plus  In early 2017 the Samsung Chromebook Plus was introduced by Google as the semi-official Google-sanctioned Chromebook. Today it’s $399 direct from Samsung and a darned fine choice – a 12.3” high resolution screen, generous processor/memory/storage, full support for Android apps, all the trimmings. (Amazon)

Samsung also offers the more expensive Samsung Chromebook Pro for an extra $100. The extra money buys an Intel processor, which doesn’t make enough of a difference to be worth the money.

Asus Chromebook Flip C302  I chose the Asus Chromebook Flip C302 in late 2016 for $459, and it continues to be one of the best Chromebooks available. It checks all the same boxes and adds one more trick: the screen folds around 360 degrees so it can be used as a tablet or stand in tent mode on a crowded airplane tray table to watch a movie. That’s a pretty good trick. This is still the Chromebook I would buy today. (Amazon)

Other choices  The market is changing constantly so I won’t call out other specific models by name. Acer, Asus, Dell, Lenovo and HP all make many fine Chromebooks. (Acer has a brand new model with a 15” screen if you need it for aging baby boomer eyes.) If you see a Chromebook that looks okay for $200-$400 with a touchscreen and Android app support, buy it. It will be fine. (Amazon)

Google Pixelbook  A few weeks ago Google announced its own “official” Chromebook, the Google Pixelbook, which will start shipping in November. It is a puzzling device. Google packed it with far more processor power, memory and storage space than anyone would reasonably need, then ran the price up into the stratosphere, starting at $999 and topping out at $1,699. No one understands Google’s strategy. It misses the point of Chromebooks. The point of a Chromebook is that it requires less resources than a Windows laptop and costs less as a result. I can’t imagine what anyone could do with a Chromebook that would require a Core i7 processor and 16Gb of memory. And 512Gb of storage – Chromebooks don’t store anything on the hard drive! It’s very odd. It sends the wrong message about Chromebooks. They’re the low-powered, low-priced laptops for everyone, right?

(Worth noting: over at Chrome Unboxed, they’re speculating that Google may be laying the groundwork for Chromebooks to run virtualized versions of Windows programs, which would require storage space to pull off. It’s complete speculation, it might only be for developers or enterprises, but the possibility is intriguing because it would explain the Pixelbook design. Hmmm . . . )

There are some power users who will buy the Pixelbook, I’m sure, and perhaps Google’s brand name will start to be perceived as a mark of status so people respect you if you pull a Pixelbook out of your briefcase. But most of you don’t need to go there.

Happy shopping! In the next article, I’ll give you a few tips about how to set up your new Chromebook.