Microsoft has a modern platform for apps that would make your computer safer, more reliable, and perform better. All that’s needed is for you to give up everything that you do on your Windows computer today and start over again with new programs from the Windows Store that don’t look or work like the programs you’re using now.

Perhaps you can understand why that’s not going well.

Let’s look at the background from Microsoft’s perspective, then take a look at how it’s going in the real world.

All of the programs you use today were built on an aging platform – let’s call it “Win32” for simplicity. That’s Chrome, Word, Excel, Outlook, Acrobat, Photoshop, Quicken – everything.

Each program is purchased or installed separately from individual sources. In the past we bought each one in a box at Best Buy. Now we download them directly from the developer or from Amazon.

Security is a problem. Each Win32 program has access to the system at a deep level that doesn’t quite lock out hackers and bad guys, and each one can potentially crash the entire computer.

Performance is a problem. There’s no central authority for updates so each program runs its own background routine to check for updates and pop up notifications when they’re ready. That means lots of background processes and scheduled tasks slowing things down.

In 2008, not long after the introduction of the iPhone, Apple opened the App Store for iPhones and iPads. Apple curated the apps that were allowed to be listed in the App Store and enforced tight restrictions on the apps for security and reliability. Apple also kept control of the process for updating apps, making updates more reliable and less intrusive.

The App Store was just a teensy bit successful. There are more than 2.2 million apps in the App Store that have been downloaded more than 130 billion times. Along the way, Apple has made a ton of money from its 30% share of revenue, and the App Store has generated more than $70 billion for developers.

Google followed suit with the Play Store for Android devices, and was also successful – both at making money and at keeping the Android ecosystem under at least a bit of control.

Windows is in decline, and at least part of the reason is that computers are too complicated to use. People are paranoid of hackers and bad guys (with very good reason!), they’re irritated by updates, and they’re furious about bugs and crashes.

It might not seem like it but Microsoft has made huge strides toward making Windows more secure and reliable. But its hands are tied in some ways by the Win32 architecture, and it can’t help looking over at Apple’s and Google’s piles of cash from the app stores and dreaming of how it can get some app money for itself.

In 2012 Microsoft introduced the Windows Store in Windows 8 as an app store for new, “modern” apps that were built on a new platform and shared a common look and feel that was quite different than traditional Win32 programs. The Windows Store had the same characteristics that had worked for Apple and Google – better updates and more security for the apps, and a 30% share of revenue for Microsoft.

Then there was a hitch: no one cared. Developers ignored the Windows Store, or they half-heartedly delivered a modern version of a familiar program and then abandoned it when no one downloaded it. Most people didn’t know the Windows Store existed, and even if they looked, they found no reason to hang out there.

By that time the decline of Windows computing was under way, accelerated by the disastrous reception for Windows 8. Microsoft knew – quite rightly – that nothing was going to stop that slide if Windows continued to be an aging platform for the same old Win32 apps.

With Windows 10, Microsoft doubled down on the Windows Store. It merged all its other platforms into the single Windows Store – movies, music, phone apps, even e-books. It changed the rules about apps to reduce the workload for developers and allow new technology to power the apps (including the next generation of “Progressive Web Apps,” one of the hot industry buzzwords).

So far in the life of Windows 10, no one cares. Users and developers are ignoring the Windows Store.

Microsoft stares at the future of Windows in decline and thinks about what it would be like if it could wave a magic wand and *POOF* all our computers are running nothing but Windows Store apps. We’re safe and our laptop batteries last longer and updates don’t require restarts very often and our computers don’t crash and we’re so happy that we have a resurgence of love for Windows computing and no one buys Chromebooks and we all use laptops instead of phones to take selfies.

It’s a great vision, isn’t it? 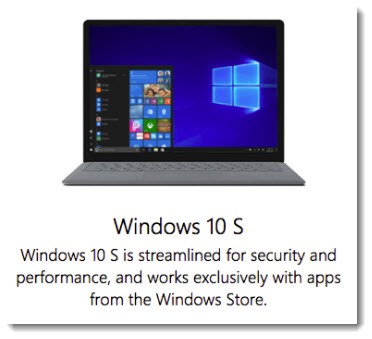 Microsoft even created a special version of Windows, Windows 10 S, that runs only Windows Store apps and can’t run any Win32 apps at all. A Windows 10 S computer can’t run Chrome or any other program you’ve ever installed on a Windows computer. It can run specially modified versions of the Office programs but that’s about it for anything familiar.

You’ll forgive me for repeating the obvious but, no one cares. There is no demand for this. It meets Microsoft’s business needs, but users and developers didn’t ask for this and frankly don’t need it. Our Windows computers are helping us get our work done just fine, more or less, and there are no advantages to this new replacement that justify the cost of the transition – a cost measured in dollars and the frustration of having to learn new ways to do everything.

Feel a bit of pity for Microsoft. It is trying to respond to our complaints and deliver a better version of Windows. But there is one, and only one, way to market this vision and convince us to make the transition: by telling us that Windows 10 is just awful. It can’t say that clearly, for obvious reasons. When the message is couched in marketing speak (“streamlined for security and performance”), it sounds weak and unconvincing.

Microsoft is not done. I suspect literally almost no one is running Windows 10 S, but there is still marketing to be done for schools and low-end cheap laptops. The store might be renamed to “Microsoft Store” with a new icon – maybe that will help it turn the corner, eh? The store is a bit of a cesspool of terrible apps and poor experiences, but Microsoft has promised to redouble its efforts to clean it up – although come to think of it, it promised to redouble its efforts to clean it up in 2015, so now it must be working at quadruple the pace. It still looks like a collection of crap to me. Maybe Microsoft can redouble its efforts a couple more times.

The story continues. I think the Windows Store will continue to be irrelevant and Windows 10 S will be an embarrassing failure, but who knows, maybe Microsoft will find a way to make it work. Let’s see if anything draws you to the Windows Store in the next year or two.