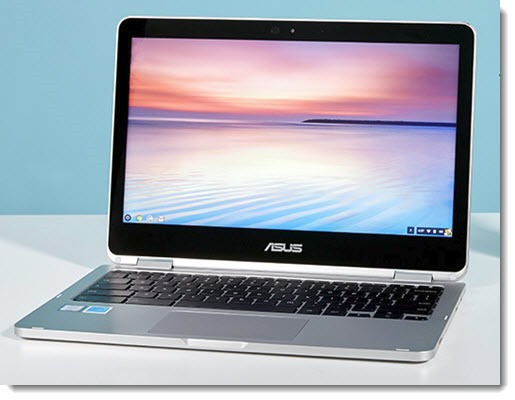 Chromebooks are laptop computers. They don’t run Windows or Mac programs, but they’re powerful computers that can do many useful things. They’re simple, secure, fast, they feature long battery life, and they’re always up to date. The best of them have high quality touchscreens that can flip over so they can be used in tent mode or as a tablet. They’re thin and light, and the best Chromebooks are as well made and elegant as high end Windows or Mac laptops.

Chromebooks have a killer feature.

The rest cost less than that. (With one exception – more info in the next article about the Google Pixelbook.)

Do I have your attention yet? The low price changes everything.

I’ve been using a variety of Chromebooks for the last year, trying to understand what they can and can’t do, and who should consider them. Let me give you a quick introduction to Chromebooks. Maybe you’ll want to buy one.

What can you do with a Chromebook?

Chromebooks run Chrome OS, an operating system from Google. They do not run Windows or Mac programs.

You already know what it’s like to sit down at an unfamiliar computer. If you’re a Windows user and you sit at a Mac, nothing is quite the same – buttons are in different places, many of the programs are different. Same for a Mac user sitting at a Windows computer.

That’s what it’s like to use a Chromebook the first time. There are many similarities but nothing is quite the same. That’s not a big problem, though, because Chromebooks are designed to be simple. All the complexity has been stripped away. Chrome OS was built up from a simple foundation and has more in common with phones than with computers. You’ll find your way around quickly. To borrow a phrase from Apple: Chromebooks just work.

The experience of running a Chromebook starts with flipping the lid up and instantly seeing a login screen. When you log in, there’s a desktop and a taskbar, volume and wifi controls in the lower right, and a start button in the lower left. You can browse the web, read mail, watch a movie, browse through photos, run apps, play games, and a lot more.

There are five things that you can do with a Chromebook. If you think about it, you’ll realize they cover 95% of what you do with a laptop. There are a few words below about the exceptions.

•  Chromebooks are built around Google Chrome, the familiar web browser. You can do anything on a Chromebook that you can do in Chrome on a computer. You can browse web sites, read email, watch movies on Netflix and Amazon, and listen to Spotify. You can’t install Outlook but you can use Office 365 webmail. You can’t install Word or Excel but you can use Microsoft’s online versions of those programs. You can use all of the cloud services that your business relies on.

•  Chromebooks come with built-in apps for all the Google services, of course – Google Maps, Google Photos, Google Drive, Google Docs, and all the rest.

•  There is a Chrome Web Store with thousands of apps as well as extensions for Chrome that make many online services act like installed programs. They’re actually just running in a dedicated window in Chrome but they look like any other program and they have the characteristics you’d expect – notifications of new mail, say, or the ability to run offline.

•  With a couple of clicks, you can run any website in its own window and pin its icon to the taskbar. Lots of online services look and act exactly like they are installed programs when they’re in their own windows.

•  Recent Chromebook models can run Android apps. The Android Play Store allows you to choose from exactly the same apps that run on your Android phone. There have been lengthy delays while Google fixed bugs and encouraged Android developers to make their apps work more reliably, but it will soon remove the “Beta” label and make the Play Store a standard Chromebook feature. Some apps work better than others but you’re likely to find that this expands the usefulness of Chromebooks in an important way.

Since Chromebooks don’t run Windows or Mac programs, there are things you can’t do.

Any one of those might be the reason that a Chromebook doesn’t work for you. You’ll want to think about it a bit, though, because workarounds might be easier than you think – and don’t forget that $450 price tag.

Because of the way Google handles things behind the scenes, if something happens and you have to replace the Chromebook, you will be up and running with the identical setup within – literally – two minutes after you log into the replacement.

It’s worth noting that Chromebooks need an Internet connection all the time. Some apps are designed to work offline but mostly you should assume that a wifi connection is required for a Chromebook to be fully functional. If you think that’s a problem, (1) well, frankly, it’s probably not as big a problem as you think, but (2) maybe these aren’t for you.

Chromebooks are taking over the US education market and Chrome OS quietly overtook MacOS this year to become the second most popular computer operating system in the US. Windows PC sales are still dropping fast, another 10% decline in the last year after very weak back-to-school sales.  But Chromebook sales continue to climb by leaps and bounds.

•  They’re not the same as a Windows or Mac laptop and they can’t do some things that you’re accustomed to with Windows or MacOS. But they might do enough to make them a satisfying choice for your next laptop.

•  And their simplicity and reliability might make them a better choice for some people than a Windows or Mac laptop.

In the next article, we’ll talk about who should buy a Chromebook, and how to shop for a Chromebook.