Windows Themes And The Failure Of The Windows Store

Microsoft believes that Windows can return to its position at the center of our technology world if all of us begin to use the Windows Store to install programs.

It is a flawed, desperate vision. Windows is going through a slow, long-term decline. The Windows Store will not change that. The decline is broader than Windows, and it is permanent. Over the next five or ten years, desktop computers will become a niche product, primarily used by businesses and creative professionals. There will be no burst of enthusiasm for the Windows Store to change that.

Something drives Microsoft to keep trying. In another article, I’ll tell you about the sad history of the Windows Store and try to explain why Microsoft can’t give up on it.

For now, let me give you an example of why you’ve never looked at it.

The Store is the icon on the taskbar that you’ve never clicked on. (If you’re one of my clients, you’ve never seen it. I make it disappear when I set up new computers.) Go ahead! If you have a Windows 10 computer, open up “Store.” Take a look. It looks like the Google Play store on Android phones or the Apple Store on iPhones, except there’s nothing you want. I don’t say this to be critical, just as a reality check. If you’re going to buy a streaming movie, you’ll get it from Apple or Amazon, not Microsoft. You’re not going to buy music from Microsoft – your Spotify subscription is a far better choice. You’ll get games through Steam, not from Microsoft (unless you’re an Xbox user, in which case you’ll buy it from the store on the Xbox). There’s even a new place in the Windows Store to buy books, which is just odd.

And it doesn’t occur to you to look for a new program in the Windows Store. For the most part, you’re not downloading new programs at all. When you do, you go to the program website to get it, just like we’ve been doing for twenty years.

Still, the Windows Store is there and Microsoft says it’s the future. Follow along as I take you on a trip into the Store – exactly the way it happened to me a few nights ago.

Microsoft has gorgeous collections of photos that you can use for free as your Windows wallpaper. We’ve been able to download them from a Microsoft website until now but they are being moved to the store. I decided to find out what that experience is like, so I opened the Store.

I searched for “wallpaper” because that’s what I want – photos to use as wallpaper.

I didn’t find the photos. Instead, these were the first search results. 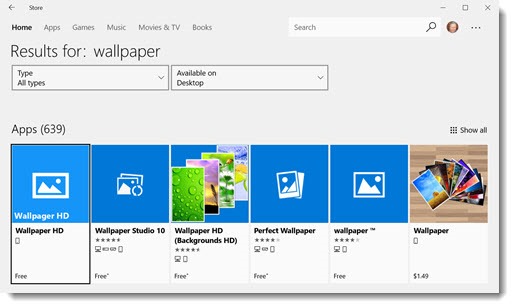 The number one result in the Windows Store for “wallpaper” is an app named “Wallpaper HD” which is such a slapdash piece of work that it has a typo in its own tile in the Store. Take a close look in the blue tile – it says “Wallpa_g_er”, not “Wallpaper.” That kind of thing happens because no one who places an app in the Windows Store gives a damn – almost no one will see their app and they’re never going to make any money from it.

Welcome to one of the small ways that the Windows Store is terribly broken. 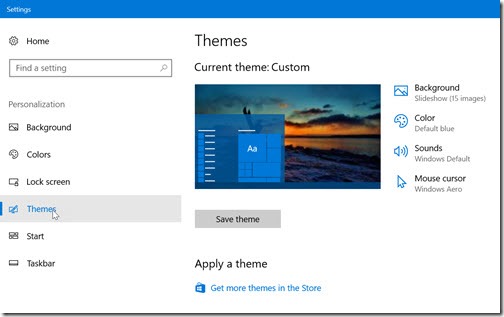 Oops! Ha ha! That wasn’t a good demo. Happens kind of a lot with the Store. Let’s try it again. Ah, here they are! 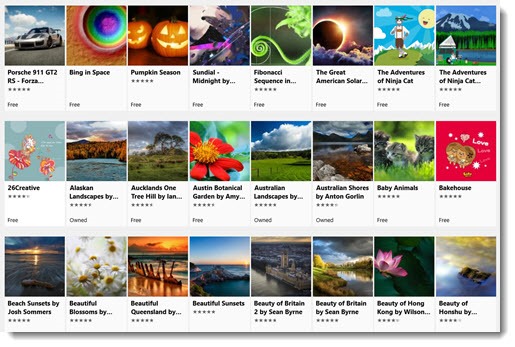 There are about 200 themes for Windows 10 in the Store. Most of them are in alphabetical order, but not all of them – the first one is “Porsche 911,” for some reason. The alphabetizing isn’t very helpful when you’re browsing because the names aren’t consistent – “Beautiful Queensland” comes before “Beauty of Hong Kong,” for example, but nowhere near “West Coast NZ” or the other New Zealand collections. There’s no way to narrow your search or find anything in particular except by scrolling.

Themes that work on Windows 10 have been available for the last few years on this web page. It has many of the themes found in the Windows Store, plus a couple of hundred more. They are sorted into categories, which makes it far easier to browse through them. The “panoramic” dual monitor photos are particularly cool (and seem to be missing from the Store). 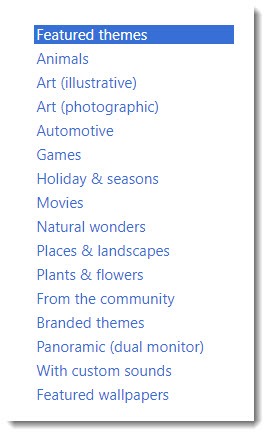 It makes the point again that searching for anything in the Store is a terrible experience.

Let’s pick a theme in the Store and download it.

It took nearly a minute to get to the screen shot that you see above. Once that appeared . . . nothing else happened. Nothing was downloaded. The progress bar never showed any progress. I left it alone for fifteen minutes. I repeated the process with other themes. I restarted the computer and tried again. I never downloaded a theme.

To compare, I went to the old website, clicked on the “Download” link under a theme, and it was installed in – literally – three seconds.

Okay, it’s just an anecdote. Maybe something will take you to the Store and you’ll have a good experience. Sadly, though, the odds are against it right now for a number of reasons. And this is the time – right now! – that Microsoft wants the Store to become an active force in our Windows experience. The Store is meant to drive the adoption of Windows 10 S, which might change your next hardware purchase. It’s meant to be one of the reasons that schools can safely adopt low-price Windows laptops instead of Chromebooks.

In another article I’ll give you a bigger view of how and why Microsoft finds itself promoting an app store despite no interest from either consumers or developers. The Windows Store is a badly broken service. For now, if you want some nice photos to use as wallpaper, get them from the old website while you still can.