The 2017 Bruceb News Year In Review 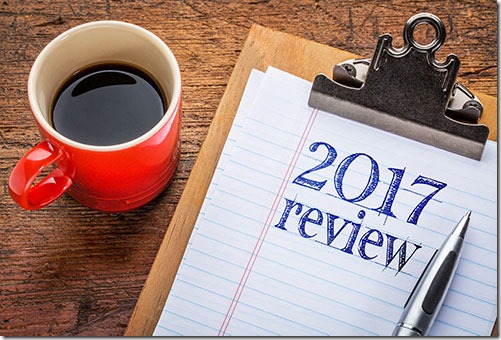 A year ago I wrote this prediction: “The word of the year for 2017 is “chaos.” Write it down, seal it in an envelope, open it up a year from now and see if I got it right.”

I think I get full marks. (Although Dictionary.com chose “complicit” as the word of the year, which has a certain snarky charm.)

We are in a transitional time in technology, with a handful of very large companies – Apple, Google, Facebook, Amazon and Microsoft – accumulating power and wealth and dominating the landscape. The technology world seems chaotic and hard for normal people to follow, but the fundamentals did not change dramatically in 2017. That’s why the best article of the year was headlined “Technology Is Boring,” describing the slowdown in innovation for Windows and Mac computers, mobile devices, and online services.

The other notable event in 2017, of course, was the twentieth anniversary of Bruceb News. All the details are in “Be Still, Your Beating Heart! Bruceb News Turns Twenty.” I’ve been waiting twenty years to write that article.

I know most of you memorized each of my articles. Just in case you missed one or two, though, here are some of the other noteworthy articles from 2017.

Rules For Computer And Online Safety 2017

•  The essential guide to being secure in a dangerous world.

How To Close A Hijacked Web Browser

•  This is why security experts agree that unbreakable encryption is the best way to keep us safe, without a backdoor for law enforcement.

•  Everything else makes sense if you understand Microsoft’s motivations – to manage and delay the inevitable decline of Windows while it focuses on cloud services for enterprises.

•  Several articles about Microsoft missteps – everything from a new version of Windows destined to fail to Surface laptops that compare poorly to the competition.

•  The Office programs are mature and should be completely solid. They’re not. This article describes the long-term undermining of trust that happens when we are forced to deal with bugs and glitches in the Office programs.

What To Do When Outlook 2016 Is Stuck On “Processing”

A Possible Fix For The Excel Slow File Opening Bug

•  Three of the most popular articles of the year, because people are forced to Google around looking for solutions to problems with the Office programs.

•  Increasingly what we want from Google search results is the answer to a question, not just a link to a website.

•  An introduction to the benefits of linking Chrome to your Google account on your phone, tablet, and computers.

•  Everything you need to know about the world of Chromebooks. Your next computer might be a $300 laptop.

•  Apple’s Mac division has been coasting – and why not when the phone business is so profitable?

•  Everything you need to know about the best new phones at the end of 2017.

•  A quiet but important change is now underway to move files online but have them accessible from your computer like any other files.

As always, I am profoundly grateful to my loyal clients, friends and readers for allowing me to help make sense of technology and keep your computers running smoothly. I am looking forward to the challenges and opportunities that the next year will bring. This will be the last Bruceb News article until next year. All my best wishes for happy holidays and a prosperous new year!