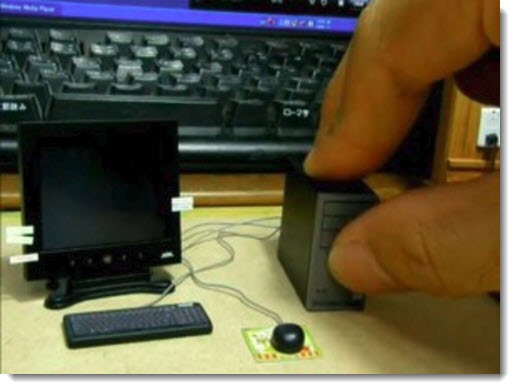 Your next business desktop tower computer might be tiny. At least you should be open to the idea.

Old habits die hard. It has taken me far too long to realize that something fundamental is changing. It’s going to sound obvious when I describe it, but if it’s so obvious, why didn’t you think of it, huh, smart guy? No, wait, hang on, we’re not there yet. Let’s do the obvious bit, then I can taunt you.

Imagine that you’re a typical business user. You keep dozens of tabs open in a browser, you work Acrobat and Word and Excel to death, you have Outlook windows flying everywhere – but when all is said and done, that’s about it. You do a few things with pictures but you’re not editing video and hosting podcasts. You’re not playing intensive video games. You have one or two monitors, no more. Your computer is a tool, not a hobby. Does that sound like you?

If you have a desktop computer, it’s probably a tower that sits under your desk. That’s been the typical business desktop computer for twenty years. The color has changed from beige to black and they’re a little smaller now than they used to be, but the basic footprint really hasn’t changed – a tower that’s roughly 14-16” tall, 4” wide, 12” deep. At one time we opened the cases all the time to swap components in and out, upgrading video cards and adding hard drives and replacing NICs. In the last few years, though, there is seldom any reason to open the case. The components are more reliable and the basic technology isn’t changing in any way that’s meaningful for a business user.

But now sit back and look at your laptop. If you’re lucky or well heeled, it’s an engineering marvel that’s barely thicker than a pad of paper and weighs under three pounds.

Here’s the obvious bit that’s easy to miss: your laptop is just as powerful as your big desktop tower. It is just as capable of handling your workload. It might even be better than the tower if it’s been purchased more recently or if you went a bit upscale when you bought it. That’s why you thought at least briefly about getting a docking station and using the laptop as your only computer, right? You knew that would work just fine.

Perhaps you’re thinking, well, then, why is the desktop tower so big? The answer, the only answer, is tradition. Habit. For a typical business user, there is no meaningful difference between a tall tower that sits on the floor and a tiny laptop.

Manufacturers are notoriously slow to change (to be fair, so are we) but they are now creating desktop computers that only take the amount of space that’s necessary, instead of a big metal box that is mostly empty space.

Look at this comparison of the various sizes of one of Dell’s Optiplex models. 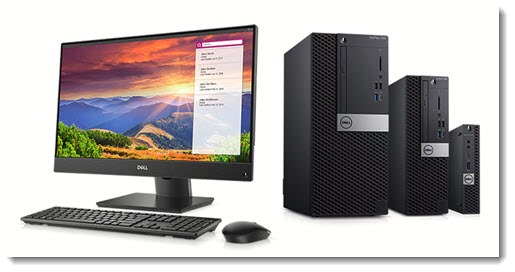 The three computers can be configured to be effectively identical. The prices are pretty similar, too. The only difference is the size. It’s disconcerting to open the thousand dollar box for a new computer and pull out something the size of a sandwich – but again, we do it all the time with laptops. It’s all about changing our expectations.

Here’s a visual of the micro PC on the right in the above picture to give you some perspective. 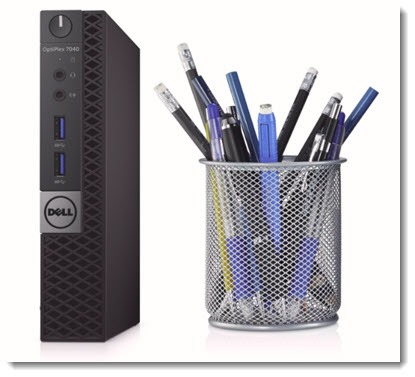 This is possible because of a number of improvements and changes in system design.

•  Heat used to be a problem but almost never causes any issues now, especially in micro PCs where the manufacturers use processors and other components optimized for laptops and small spaces.

•  Solid state drives are far smaller than conventional hard drives, and the micro PC hard drive might be smaller still as manufacturers move to “hard drives” that are just a few chips on a stick.

•  There isn’t enough room for a CD/DVD drive but that’s not very important now: you’re not using them, and if you need it, a USB drive costs twenty five bucks and runs at full speed thanks to faster USB 3.0 technology.

The new micro PCs tend to be cheaper than laptops with similar specs. It took me a minute to figure out why: when you buy a laptop, the price includes a high-resolution screen and a battery. D’oh!

There’s nothing new about tiny computers. Tiny PCs have existed in one form or another for fifteen years, and Apple introduced the first underpowered Mac Mini in 2005. It is only recently, though, that all those technology advances have combined to make tiny PCs appealing in offices.

The official term, by the way, is “small form factor computers.” That term covers a variety of sizes and shapes, from thin slices to small cubes. The manufacturers then mix and match all the words that mean “small” to come up with their own marketing terms – mini, micro, tiny, nano. Dell has added micro PCs for all of its business Optiplex models. HP and Lenovo both have micro PCs for business. Intel sells its NUC devices as kits that builders can configure with their own memory, storage and operating system, but they can also be purchased pre-built. I’m not going to try to point out specific models in the constantly changing landscape; I just want you to be open to the concept when you start shopping.

The small size opens up new options for where the computer sits. Dell, for example, sells special monitor stands that allow the micro PC to sit out of sight, as well as providing mounting parts so it can be attached to the underside of a desk. Take a look at this picture for ideas. 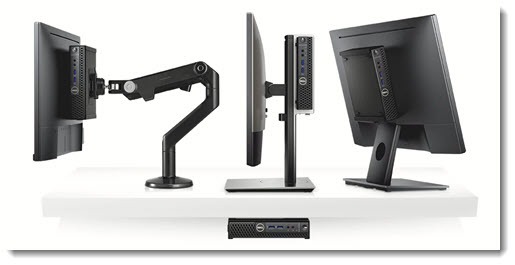 Recently all-in-one PCs have become very appealing for exactly the same reason as micro PCs: they are reliable, reasonably priced, sufficiently powerful for many home users and most business users, and they reduce clutter.

There are still decisions to make when you’re shopping to make sure you get the right processor, enough memory, and a speedy solid state drive. There are underpowered slow micro PCs, just as there are miserable tower PCs. Consult an IT professional and offer to pay vast amounts of money for good advice when you’re shopping.

Stay open to the possibility of a little teensy computer when you’re next on the market for your business. You’ll enjoy stretching your legs in the free space under your desk.