Am I The Only One Who Didn’t Know That Surge Protectors Wear Out? 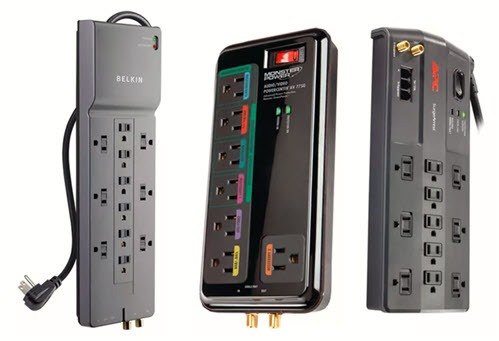 Surge protectors wear out. A few thunderstorms, or just day to day use for a couple of years, and they are completely useless for power surges.

And you know how you can tell? You can’t. They keep sending power to whatever is plugged into them. But unbeknownst to you, they are providing no protection whatsoever against power surges.

Does everyone know that except me? Because I had no idea. I’m feeling a bit gobsmacked by this.

I discovered it because two of my clients had hard drives that were fried by power surges in the last couple of weeks – the kind of hard drive death where the drives can no longer be read and no data can be easily recovered. If this was business-critical data, it might be possible to get bits and pieces of the files restored by an outfit like DriveSavers in Novato, but that is wildly expensive work, likely to be upwards of $1500.

The computers in both cases were plugged into old surge protectors. My clients believed they had some protection against power surges as a result. They didn’t. The dead computers prove that.

Surge protectors have ratings that are measured in “joules.” Joule is defined as “a made up word that is supposed to have something to do with electricity.”*

Surge protectors use up their joules. When the joules are gone, the surge protector is finished with protecting anything.

Let’s try an analogy. You buy a surge protector with a rating of 200 joules. Imagine that the surge protector has a tank attached to it holding 200 gallons of joule juice.

•  There is a power outage. The surge protector uses 10 gallons to absorb the spike when the power comes back on.

•  It uses another 10 gallons to handle electricity surging and spiking during a thunderstorm.

•  It uses 2 gallons every time the refrigerator or the air conditioner turns on.

•  When the 200 gallons have been used up and the tank is empty, that’s the end of any surge protection. You can’t refill it. You have a power strip that will do nothing for your devices when another power surge comes down the line.

That’s actually a pretty accurate analogy. In reality the surge protector isn’t using up liquid from a tank – it’s absorbing excess voltage into a steadily degrading metal oxide varistor. Obvious, right? The effect is the same: it’s using up its capacity until it’s done.

Sometimes a surge protector has a little light that is meant to communicate when the joules are used up. No one ever looks at those lights and I wouldn’t have a clue what it meant even if I saw one lit, or turned off, or blinking, or whatever the alert is supposed to be.

A tiny number of surge protectors actually stop working when the protection is done. It’s a feature of the model chosen as the favorite by The Wirecutter, the Tripp Lite TLP1008TEL. Your cheap surge protectors don’t do that. If they’re more than a couple of years old, they’re probably worthless for protection.

Things get more complicated for UPS battery backups, which may or may not provide some level of surge protection, and there are devices called “whole house surge protectors” which are quite different. I’m talking about the twenty dollar strips that you get at the hardware store.

I didn’t know that. Did you know that? Now I have to wander around the house looking behind furniture for old surge protectors. You might want to do the same thing – especially for the ones that your computer and other electronic devices are plugged into.

Oh, and in case I haven’t said this lately: backups are a wonderful thing. Let’s all sing it together: backup, backup, BACKUP!

*The real definition of joule is: “a unit of work or energy equal to the work done by a force of one newton acting through a distance of one meter.” By an interesting coincidence, the definition of “newton” is “a made up word that is supposed to have something to do with energy.”