OneNote Is Lonely And Confused 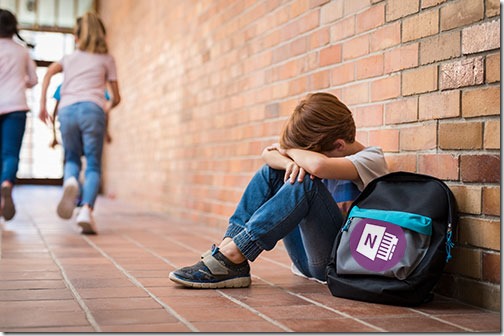 Microsoft OneNote isn’t on the Office team these days, at least not like it has been for the last ten years when it was installed alongside Word and Excel as a full-fledged Office program. OneNote has been left to play by itself.

Oh, and if you’re a OneNote user, the version you’re almost certainly using on your PC is on its last legs and someday will be discontinued.

But this is Microsoft-world, where nothing is straightforward and the same words are used to mean many different things. Take a look from a different angle and OneNote is thriving – installed more often than you realize, available on every platform for free, and continually being improved with new features.

OneNote is Microsoft’s program for free-form note-taking and collaboration. It collects your notes and lets you find them later. It keeps anything you want to put into it – scraps of information, handwritten notes, lists, web links or full web pages, photos, videos, files, audio clips, whatever. You can keep things organized or create a freeform jumble and search for things later (everything is immediately searchable). You can share notebooks easily. The more you use it, the more useful it becomes.

OneNote was introduced in 2003. It has been included by default with every version of the Microsoft Office suite for the last ten years. It has now outlasted Evernote, at one time its primary competitor; Evernote is dealing with years of bugs, breaches, and privacy controversies and is retrenching, hoping to make a go of it with a fresh start and a new CEO. I was a OneNote evangelist for quite a while, convinced that almost everyone would benefit if they spent a few minutes learning how the program works. I found that most people didn’t care and never used it, so like other true believers, I use OneNote every single day . . . and I rarely talk about it. Shame, really.

There must be a coterie of Microsoft employees who share that vision of OneNote as the hidden jewel in Microsoft’s productivity programs, because it has continued to be developed and pushed. Maybe the real secret is that it’s a great classroom tool so it’s an important part of Microsoft’s efforts to stay relevant in education.

There is a full-featured version of OneNote that you can use online in a browser as well as versions of OneNote for every device you can imagine – iPhones and iPads, Android phones and tablets, Windows PCs, and Macs. Four years ago Microsoft committed to making OneNote free everywhere, so you can download and install OneNote completely for free anywhere you want to use it.

(Note for new users: OneNote stores everything in notebooks that use a special format designed to be synced online through OneDrive. That means you have to navigate your way through the confusion of Microsoft’s two different types of accounts and two different flavors of OneDrive. More information about that in this article. If you haven’t used OneNote before, spend time with some tutorials like this one to get oriented.)

Why is OneNote lonely and confused?

If you use OneNote on a Windows computer, you probably use a version that looks like Word and Excel – same type of ribbon across the top, same presentation of windows and columns and options. The most current version is called “OneNote 2016″ and until recently was installed alongside the other programs when you installed Office 2016.

The screenshot above, though, shows the programs that are installed today if you subscribe to Office 365 and install the Office programs. If you look closely and check twice, you’ll see that OneNote is missing. It’s no longer installed with the other Office programs.

In fact, OneNote 2016 is the end of the line for the traditional OneNote program. Microsoft has updated the other programs to “Office 2019,” but there will not be a new version of OneNote to go along with the others. Oh, for a while, OneNote 2016 will still be available to download and install separately if you go hunting for it, and it will still be supported for a while longer, but it will get no new features and no love from Microsoft.

That’s because, in classic Microsoft fashion, there are not one but two versions of OneNote that you can run on your Windows computer. The latest and greatest version, the one that Microsoft has invested its hopes in, the one that it wants you to start using, the one that will get all the new features, is a completely different program named “OneNote for Windows 10.” Catchy name, eh?

The new version has the streamlined look of other Windows 10 apps that you’re not using, like Mail and, I don’t know, Calendar, I guess. No one uses the apps with the new design. I know I don’t. Technically, they’re built using a framework that Microsoft calls “UWP,” Universal Windows Platform. It’s the way all the programs in the Microsoft Store were going to be written until it became clear that the Store was being ignored, to the point that tech journalists wonder whether it will someday just disappear.

The UWP version of OneNote will be the approved version of OneNote going forward. That’s a little confusing because until recently Microsoft was going to build UWP versions of Word, Excel, and PowerPoint, but abandoned those plans last fall because UWP is going nowhere fast. Kinda makes you wonder about the future of OneNote, doesn’t it?

You’ll see the strange message above when you go to the OneNote download page: “OneNote is already installed on Windows 10. Also available on Windows Desktop.” Say what?

The small print about “Also available on Windows Desktop” is a confusing way to let you know that you can also download the old-fashioned version called “OneNote 2016,” which is the one you want, and which you may already have anyway, which is why OneNote appears twice on the start menu when you search for it.

Don’t worry. All the versions of OneNote open the same notebooks and keep them all in sync. Each version on each device has slightly different features – a few missing over here, a few that are only over there, but more or less, it’s the same program everywhere.

If you’re already using OneNote 2016, keep using it. It won’t become obsolete or unsupported for a while. If you want to try it out as a new user, though, try the version that’s installed with Windows 10, just called “OneNote.” It’s quite a nice program! You might like it.