Windows Is In Its Declining Years, Macs Are Entering Their Second Childhood 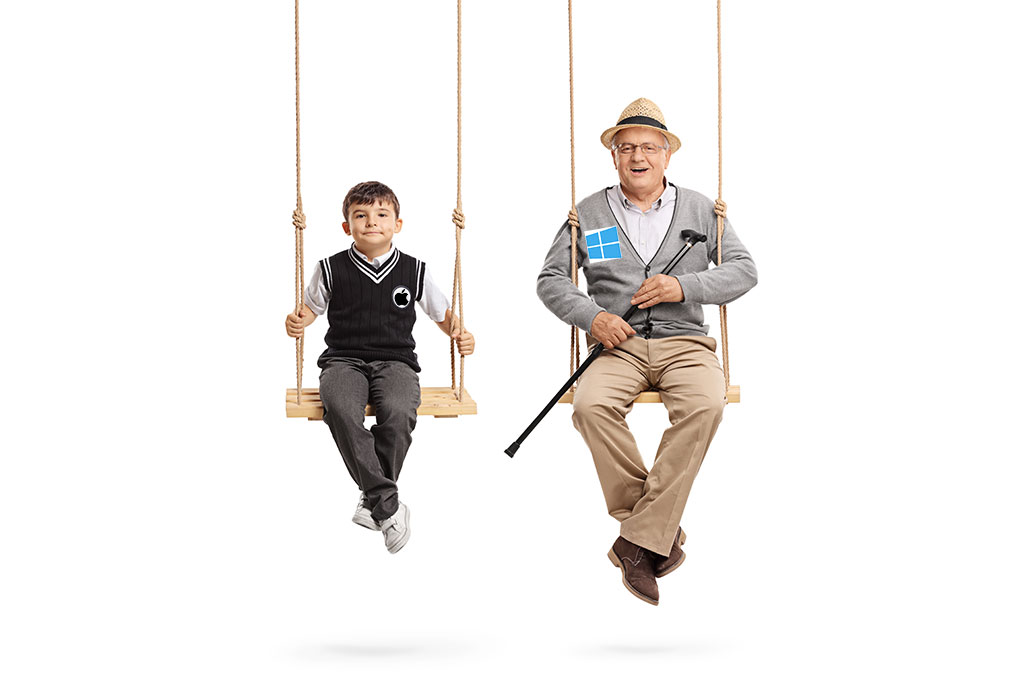 These events have paved the way for Apple to dominate personal computing in the next five years.

Intel has failed at keeping up with the needs of a mobile population. The best Intel processors are powerful, but Intel’s entire lineup lags far behind ARM processors for power management and connectivity, just as important as raw power in today’s mobile world.

Windows is a legacy operating system with heavy system demands. It is closely tied to Intel processors and cannot run well on other types of processors without losing backward compatibility with hardware and programs that Windows users depend on – the very things that make us call something “Windows.”

Microsoft is well aware that it is being dragged down by its dependence on Intel processors, but the architectural limitations of Windows have prevented Microsoft from running Windows successfully on ARM processors, the only reasonable alternative.

Apple’s operating system for Macs is a bit lighter than Windows, but more importantly, it is less dependent on backward compatibility and it is built in such a way that it can be migrated away from Intel processors. That allows Apple to take advantage of the battery life and connectivity improvements in ARM-based processors.

Apple plans to leverage that advantage by modifying the processors in proprietary ways that directly support Apple hardware as well as tying macOS and iOS together. If Apple can execute those plans in smart ways, Macs will begin to have undeniable advantages over Windows PCs for consumers and small businesses – smoother operation, better performance, longer battery life, and seamless integration with iPhones and iPads.

Add one more thing to the picture: Apple has shown an increased willingness to lower prices on its entry devices. It is no longer targeting only the premium market in phones and tablets. Imagine the advantages of redesigned Macs in laptops that are priced to be competitive with midrange Windows laptops.

That covers a lot of ground. I want to bring you up to speed on Intel’s failure, which is not well known outside the tech industry. In the next article, we’ll go through Microsoft’s inability to bring Windows to ARM processors, which has created this opening for Apple.

Intel tried hard to make decent mobile processors. It failed – completely, thoroughly, embarrassingly failed. It has paid dearly for the mistakes that let the mobile market slip away. Intel’s mobile failure is a fascinating, complex story. Joel Hruska wrote an extensive post-mortem for Extremetech in 2016, and updated it recently. Here’s part 1 and here’s part 2 of his series.

Intel then launched an effort to develop 5G modems for the next-generation mobile broadband network being deployed worldwide. If it had been successful, Intel would have been able to benefit from today’s anti-Chinese hysteria, which is causing the administration to insist on alternatives to Huawei equipment.

Today consumers are ready for similar advances in power, battery life, and connectivity in laptops – and Intel is failing again.

Processors are complicated, but we can reduce the complexities to a single number. The size of the transistors on a chip is measured in nanometers. When a processor can be manufactured with smaller transistors – 7 nanometers (7nm) or 10nm instead of 14nm, say – the processor is more power-efficient and performance improves.

Intel has struggled in recent years to make denser chips. At one time, it was leading other manufacturers by large margins and it could afford to lose a little ground. Now, though, AMD, Apple, Samsung, and others are making processors that are far more packed than Intel processors.

Want some numbers? Intel was slow to market with 14nm processors. Its 10nm processors were delayed for five years and only began to trickle out for Windows PCs within the last 12 months. And last week it was forced to announce another delay to its 7nm-based CPUs, which will now not appear until late 2022 or early 2023.

Competitors are far ahead. Taiwanese manufacturer TSMC produces 7nm processors in huge quantities, and Samsung is talking about bringing a 3nm processor to market next year. Here’s what more dense processors mean for Apple:

“With 7nm (compared to 14nm), you could get 25% more performance under the same power, or you could get the same performance for half the power. This means longer battery life with the same performance and much more powerful chips for smaller devices since you can effectively fit twice as much performance into the limited power target. We’ve already seen the A12X chip from Apple crushing some older Intel chips in benchmarks, despite being only passively cooled and packed inside a smartphone, and that’s just the first 7nm chip to hit the market.”

“Quoted in Bloomberg, analyst Chris Caso described the admission as “a stunning failure [that] could well represent the end of Intel’s computing dominance.”

“With the latest push out of process technology, we believe that Intel has zero-to-no chance of catching or surpassing TSMC at least for the next half decade, if not ever,” analyst Chris Rolland added, referring to a Taiwanese manufacturing facility. TSMC already produces more than one billion chipsets each year, far more than Intel.”

Intel-compatible processors are generalized to suit a wide range of hardware. What Apple announced is that will abandon Intel processors and custom-build its own ARM-based processors, which are specifically designed to integrate with Apple hardware and software. That allows Apple to jettison some of the generalized overhead it does not need and optimize performance and power consumption for its own devices.

Intel is not going to go out of business. Losing Apple’s business hurts Intel’s bottom line, but Intel will be making processors for enterprise Windows desktop computers for many years. It makes big profits supplying server processors for cloud computing centers. And Intel could surprise us, perhaps by buying one of the companies doing better work than Intel is doing on its own.

You shouldn’t have to care what processor is in your laptop or your phone. What does it matter, as long as performance is good enough? At some point, though, performance is not good enough, as we’ll see in the next article about Windows on ARM.