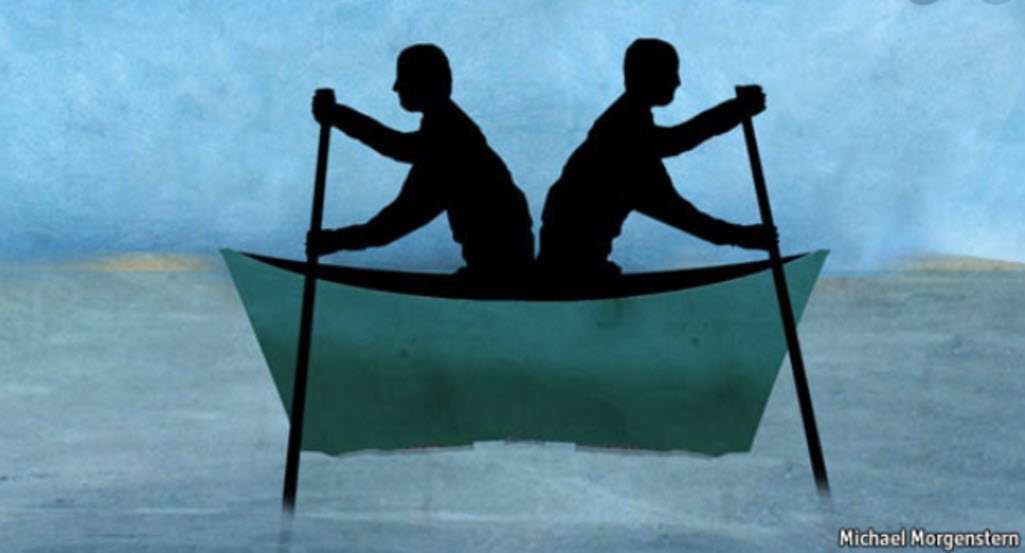 “If people are at cross-purposes, they do not understand each other because they are working toward or talking about different things without realizing it.”

Definition of “at cross-purposes”, Collins Dictionary

“One example of arguing at cross purposes would be two people arguing over what the weather would be like the next day. One watches the weather forcast and asserts that there’s a 70% likelihood it will rain tomorrow. The other consults the I Ching and counters that it will actually be a bright, sunny day tomorrow. They argue and argue without getting anywhere, because their frameworks are entirely different.”

The CEOs of Google, Facebook, Amazon, and Apple testified at a Congressional antitrust hearing last month.

Democrats focused on the possibility of illegal activities by the tech giants that may have caused economic harm.

Republicans almost exclusively asked questions about allegations that the large platforms censor conservative viewpoints and are working to elect Democratic candidates in the upcoming election.

Democrats: economic harm. Republicans: political bias. When it comes to policy making, those things are not related to each other. Regardless of right or wrong, the Republican questions had nothing whatsoever to do with antitrust.

We have begun a long period of sorting out what it means for a few large tech companies to handle very visible parts of our lives – shopping, communicating with each other, and obtaining news and other information. The US is overdue for updates to laws, regulations, and policies governing monopolies and antitrust, privacy, copyright, telecommunications, and much more.

So far, though, we have not been careful in separating out the areas of concern. There are too many facile blanket conclusions – “Facebook is evil,” “Google invades your privacy,” “Amazon should be broken up.” The Congressional hearings were always going to be a spectacle instead of a deep fact-finding effort – that’s the nature of that kind of public hearing. But it would be better for our country if at least everyone could focus on one issue at a time, instead of talking past each other about multiple issues that have little to do with each other.

This will be a little dry, but if you stick with me, you will have a much easier time sorting out the headlines, I promise. And, as always, Bruceb News comes with a full money-back guarantee.

There are six distinct issues being discussed about the tech giants and their role in society.

These are separate issues and each deserves its own conversation. Some will be addressed by existing laws and agencies; some might require new regulations or a complete rethinking of existing structures.

But we will not make progress if a muddled conversation wanders from one topic to another. There is some overlap but less than you might think. There is no overarching principle that draws everything together.

I want to say a few words here about each one, then perhaps address one or two more fully in later articles.

Current US antitrust law is based on harm to consumers, which traditionally has almost exclusively been measured by higher prices. This is largely irrelevant to the large tech companies, which either offer (1) free services (Google search, Facebook), or (2) services that consumers prefer regardless of cost because of perceived additional value (Apple phones, Amazon retail).

Wired magazine summed up US antitrust law this way: ” Under current U.S. law, being a “monopoly” is not illegal; nor is trying to best one’s competitors through lower prices, better customer service, greater efficiency, or more rapid innovation.”

The giant tech companies have built their businesses on the digital trails that we leave behind for free – the pages or posts that we view or ignore, the things we search for, the time we spend hesitating over an ad, the details that can be learned from our photos or location, and more. The digital debris is turned into lucrative advertising or retail businesses with no higher prices – no “harm to consumers” – that can be addressed by current US antitrust law.

The European Union focuses its antitrust efforts on innovation: “Monopoly for the Europeans can raise prices, lower prices, or have no impact on prices but still be dangerous because it stifles new ideas.” The difference in approach has made the EU more aggressive and more effective in regulating and fining the tech companies.

We need a conversation in the US about antitrust law. It might lead to a completely different approach that takes into account the new economics of the Internet era. Today the tech companies are able to argue very effectively that they are not violating US antitrust law because: (1) they do not have monopolies – or even a majority of market share – in the industries where they compete (a point made by every tech CEO to Congress at the recent hearing); (2) they are not engaged in any specific activities that are illegal under current US law; and (3) there is no harm to consumers because prices are not rising, the criteria under current law.

Facebook, YouTube, Twitter, Reddit, and other large networks were built to allow almost anyone to post almost anything. Mark Zuckerberg has caused much frustration by consistently maintaining that Facebook’s fundamental principle is protection of free speech, even when it seems obvious that something should be taken down.

US law gives the tech companies legal immunity from the majority of posted content; with that protection, the tech companies permit content to be posted with as little moderation as possible, both to fulfill the vision of open communication and because moderation is extraordinarily difficult as a practical matter.

For every decision that seems black and white – taking down the Christchurch shooting video, for example – there are millions of grey areas where reasonable people will differ about whether moderation is necessary. As I said last year: “There are only blurry, indistinct lines between copyright enforcement, elimination of violent content, and outright censorship.”

Almost anyone who believes Facebook and Twitter should be removing content probably does not understand the scale of those companies – the sheer volume of users and posts every minute of every day.

I used a single statistic a couple of years ago to make the point: “In the last quarter of 2017, Facebook identified and deleted seven million fake accounts every day. Human beings literally cannot have more than an insignificant role in that process, no matter how many employees Facebook hires.”

Nonetheless, Facebook, Twitter, YouTube, and other companies are now dealing with growing demands that they take responsibility for removing content. There are constant cries for laws and regulations to force the companies to remove or annotate content. The companies are trying to do enough voluntary moderation that they stave off regulation; occasionally they even encourage regulations as a way to have someone else be responsible for setting up the rules.

The areas where moderation is demanded:

This is perhaps the most difficult issue for the tech companies – and for our legal system, because the whole issue is outside the scope of any existing laws.

The tech industry has had longstanding problems with allegations of gender bias and lack of diversity in its workforce. The giant tech companies deserve to be called out on that, but that should be part of our society’s larger reckoning with gender and racial bias. The same issues confront much of corporate America, not just the tech companies. The climate is particularly tough for dealing with these issues today, when the old white men that run the Republican Party and the current administration are actively hostile to gender and racial diversity.

Data about us is collected continuously by all of the tech companies. The giants – Facebook, Google, Amazon – use that information for their own benefit, to place ads before us, to sell us goods directly, or to inform the services offered to us. The giants do not sell our data or give it away directly to third parties (except for Facebook, which is having trouble breaking its very, very bad habits), but they absorb data from the vast ocean of our personal information sloshing about online. Many other third party data brokers buy and sell our data in a huge shadow economy. We have virtually no privacy.

The debate over privacy is going in fits and starts. Books like The Age Of Surveillance Capitalism are drawing attention to the unexpected consequences of new technology and data collection. Laws like GDPR in the European Union and California’s Consumer Privacy Act are the first steps toward needed protection for our personal data. Many of the big tech companies, including Amazon, Apple, Facebook and Google, are pushing for federal digital privacy legislation.

We assume that the US-based tech giants are protecting themselves against being hacked by foreign powers. There is no coherent strategy in the US for dealing with the consequences of a hack of a major company, an area that deserves consideration.

At the moment, though, the only national security debate concerns companies like TikTok and Huawei, which are based in China and have drawn the attention of the Trump administration. Those companies have done nothing whatsoever to deserve that scrutiny. The proposals to block TikTok, its parent company TenCent, and Huawei from doing business in the US have no basis in US law and are harmful to our national interests.

There is no meaningful national security conversation going on today, just anti-China xenophobia.

This has become a lightning rod issue, and to some extent it overlaps the other categories. Alleged political bias is claimed by Republicans to be a reason to break up the big companies or to require them to change their content moderation. Those calls have no basis in US law and are contrary to the American political tradition.

Facebook, Twitter, and YouTube use algorithms and (recently) people to review posts and determine what to promote, what to annotate, and what to delete. Republicans cite anecdotes about alleged “bias” that don’t prove anything except that they misunderstand the process, perhaps deliberately to gain political advantage. They claim that they want the tech companies to prevent posts that have “fake news” and false information, and then complain when they discover that reality has a well-known liberal bias.

The companies should be pressed to be fair. It’s important that their algorithms do not reflect hidden biases. Facial recognition databases, for example, tend to overemphasize white faces, leading to poor results with people of color. It’s not clear whether or how this should be addressed by laws or regulations. The right answer is to make people aware of areas where the tech companies should improve, and use social or economic pressure to make them change.

Here’s an example: I am deeply disturbed that the country’s dominant source of news is at best a mouthpiece for a single political party and at worst a source of propaganda and conspiracy theories.  (In the second quarter of 2020, ratings for “Tucker Carlson Tonight” made it the most-watched show in cable news history.) Nonetheless, I’m not sure that legal action is appropriate against Fox News.

As to the tech companies, the current conversation about their alleged political bias is childish and hurts us.