Why Is A Vaccine Passport So Difficult? 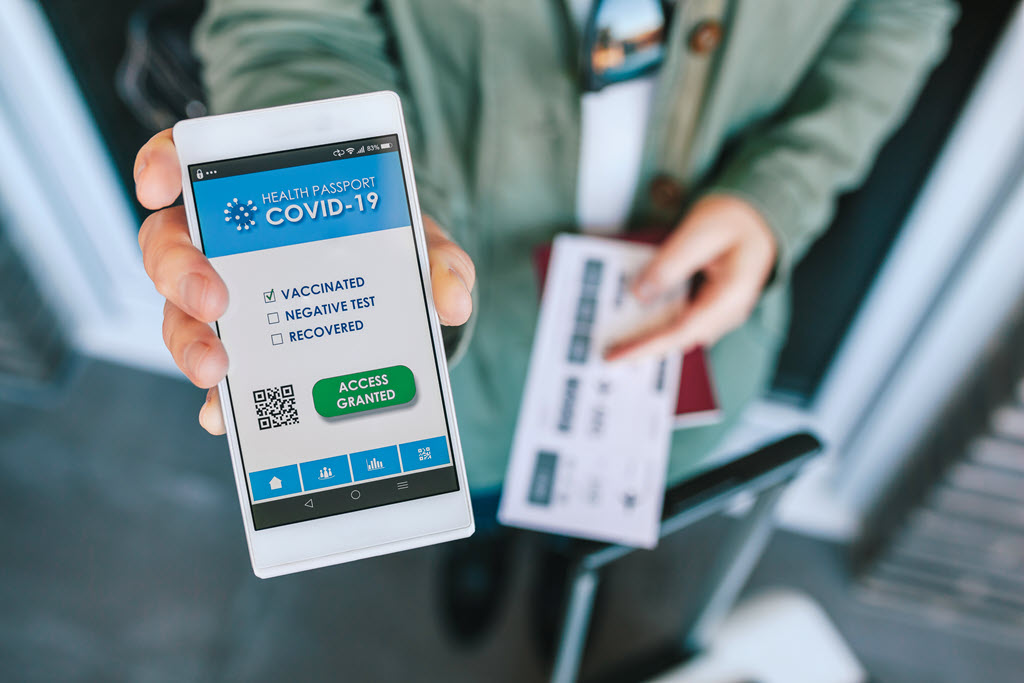 My wife and I traveled to Hawaii a few days ago. It took some close study to figure out the rules: a Covid test within 72 hours of the flight from a small group of approved providers at startling expense, followed by navigation through a maze of web-based forms and PDF uploads. More than once my wife said, how do families do this if they don’t have a lovable nerd in the household?

We will return to her question later.

We’re both vaccinated. The MRNA vaccines are so close to 100% effective against Covid that describing it any other way is misleading. The “95% efficacy” rate is commonly misunderstood. The vaccines are 95% effective if a vaccinated person has a 15 minute close conversation indoors with someone who has Covid. The latest CDC estimate says the vaccines are 99.99% effective overall in preventing breakthrough cases.

The vaccines are 100% effective against severe illness or death in breakthrough cases. (Plus or minus an anecdote about some exceptional case that doesn’t apply to you.) The data about transmission is still being assembled but there is already strong reason to believe that the vaccines are 100% effective against transmission of the disease by a vaccinated person to someone unvaccinated. (Plus or minus an anecdote that your alcoholic brother-in-law says he saw on Reddit.)

Doesn’t it seem like our vaccinations should make a difference when we travel? Maybe we should get a pass from expensive and redundant Covid tests?

In my version of a rational world, we would get on our plane without the unnecessary Covid test. We could flash a QR code for safe passage into all the other places where we mingle with other people – shopping, restaurants, buses and trains, schools, movies and shows, cruise ships, sports events.

There are lots of reasons that some people may not be vaccinated – personal choice, other medical conditions, lack of access. Those people can complain about what a shame it is but there is a cold hard reality that cannot be avoided. Covid discriminates between vaccinated and unvaccinated people. It only makes unvaccinated people sick. It doesn’t seem unfair for us to recognize that and set up different rules for unvaccinated people – especially for the people who want to make “choices” without consequences.

It’s within our power to do that in a fair and equitable way. All we have to do is (1) trust each other, (2) agree on the facts, (3) agree on how to interpret the facts, and (4) agree on a standard way to communicate our vaccination status to each other – a vaccine passport.

Ha ha! I’m writing science fiction now! I actually said that people in the US could solve a hard problem by trusting each other and reaching agreement! Isn’t that fun? Got you all caught up in it so you wouldn’t notice the sleight of hand.

Because pretty obviously that’s not going to happen in the US today. This makes me sad. Progress on a vaccine passport will be slow and fragmented and will likely never be as successful as my dreams.

Figuring out vaccine passports – it’s like looking at a diamond. Lots of different facets, each one reflects something different. I want to look at it from a few different angles.

Part one: We live in a fragmented world. I know, shocker, right? The recent headlines about vaccine passports make it hard to imagine that we will ever reach comfortable agreement.

Part two: This isn’t the first time the US and the world has dealt with vaccines. In the next article I want to pass on some stories from history about the positive effects of vaccine certificates – and the shameful consequences when they have been misused. We need to learn from those lessons. Mark Twain had it right: History doesn’t repeat itself, but it does rhyme.

Part three: And then in the last article I’ll give you a convenient digest version of the reasons that vaccine passports are controversial in 2021 – questions about privacy, inequality, and security, plus some technical difficulties caused by our disjointed public health system.

Our mixed up world 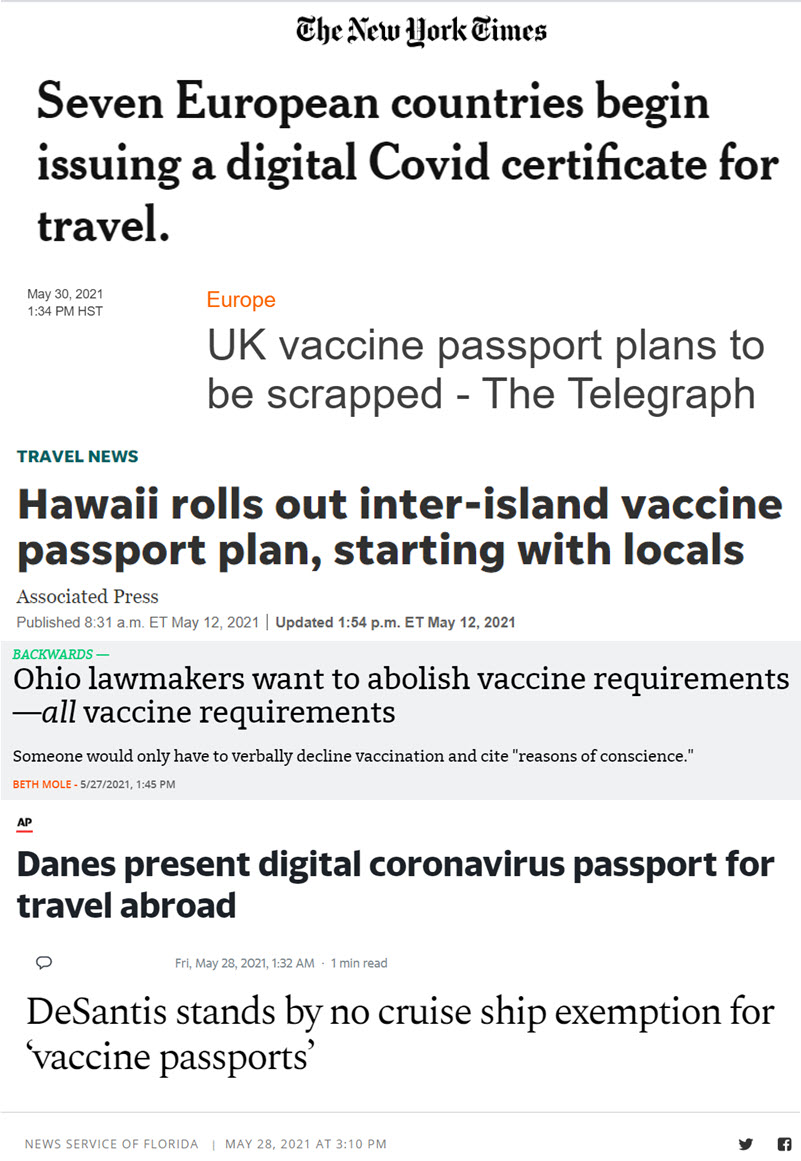 The above headlines are all collected from the last week or so.

The EU is moving steadily forward towards a standard for a vaccine passport (also called a “vaccine certificate” because the word “passport” triggers some people into a frothy rage for some reason or another). The new EU system became operational on Tuesday for travel in 27 countries. The New York Times: “The long-term goal is for all people within the European Union to have the certificates and for visitors from outside the bloc to be able to receive one upon arrival. The European Commission is in talks with the United States about how to verify the vaccination status of American visitors. It has also asked E.U. countries to start waiving testing and quarantine demands for people who are vaccinated or have recently recovered from the coronavirus, and to stop requiring quarantines for people with a negative virus test.”

But this is weird: two days before the EU rollout, there were reports that Britain and the UK are scrapping their plans for a vaccine passport as conservative politicians and civil rights groups kick up a fuss.

You probably know what’s going on in the US. It’s not pretty.

Some states are moving forward in fits and starts to implement vaccine passports. Hawaii allows free passage within the state for people with vaccinations – but so far only for people who received their vaccinations in the state of Hawaii, because those are the only accessible records that they know are trustworthy.

Meanwhile New York has authorized the only government-issued digital vaccine passport in the US so far, the Excelsior Pass. More than a million people have downloaded it. Businesses are using the QR code generated by the app to screen people going into businesses and attending sports events. There are discussions about expanding it to other states but nothing public so far about how those talks are progressing.

The Excelsior Pass app was developed by IBM, which is also participating in a larger project. The Vaccination Credential Initiative — which includes IBM, Microsoft, Salesforce, Oracle, Mayo Clinic and the Commons Project, a nonprofit with a vaccine passport app currently working with some airlines — is working to develop US standards and guidelines for digital health passes. It’s not impossible to imagine a standard that is accepted nationwide or at least by a significant number of states.

But the states, ah, the joy and wonder of living in a country with states that are choosing to be completely insane. And make no mistake, it’s a choice. Nothing can be excused by saying that the facts aren’t known or that there is anything to be “interpreted.” There’s nothing mysterious or hard to explain. It’s deliberate, willful destruction.

Not that I’m bitter.

Wow, you saw right through my gentle deception. Of course I’m bitter. I’m furious. It should not be public policy to deny reality. We already are coping with one big lie that is eroding our democracy. Big lies about vaccine passports endanger public health. People will get sick and die. Businesses will fail.

More than fifteen states have passed or are considering laws limiting the power of public health – to block hospitals from requiring employee vaccinations, to block health departments from mask mandates, and more.

Lawmakers in at least 23 states have proposed banning any employers from requiring workers to get vaccinated against COVID-19.

Ohio lawmakers are working on legislation to call off the vaccine lottery immediately and head off any plans for “vaccine passports.” And they are working on demolishing public health and eliminating  vaccination requirements in the state—not just the COVID-19 vaccines, any vaccine. Anyone would be able to decline any vaccine with a simple verbal declaration about “reasons of conscience.”

The Ohio bill applies to any vaccine requirement by any entity. No one in Ohio – no individual, no business, no state agency, no hospital, no school, no daycare center – will be allowed to “discriminate against, deny service or access to, segregate, require a facial covering or other vaccination status label for, or otherwise penalize an individual financially or socially for declining a vaccination.”

Florida, though, hears the stories about Ohio and says, Here, Buckeyes, hold my beer. Florida is darned proud of its new law that sets a $5,000 fine for any business that asks for proof of vaccination. Oh, to be clear, that’s $5,000 for each customer or employee who is asked about being vaccinated.

Florida Governor Greg Ron DeSantis made it clear that cruise ships planning to operate out of Florida ports could not require crew members or passengers to provide proof of vaccination. “There is a larger point!” he said last week. And he’s right! The larger point is that a lot of people in this country, specifically including Florida Governor Greg DeSantis, have gone completely bugfuck crazy, and our democracy is not set up to deal with that well.

The last word goes to Republican Senator Rand Paul of Kentucky, who wrote in The Hill recently that any required proof of inoculation would be “full-on vaccine fascism.” He urged readers to “burn your vaccine passport if they try to give it to you, and vote out any politician who won’t do the same”. “Full-on vaccine fascism” is a fever dream of people like Rand Paul, who should undergo deeply invasive testing because apparently he is hallucinating. And I would love to make it funny but it hurts us and causes people to get sick and die unnecessarily, and endangers our jobs and the health of businesses that could restart successfully – like the cruise industry – only if they are allowed to screen their customers.

Pah. I don’t want to talk about him no more, that empty-headed animal-food-trough wiper. I fart in his  general direction.

In the next article I’ll turn to happier topics, like scarlet fever and smallpox. Won’t that be fun?