Meet The New Outlook, Not The Same As The Old Outlook 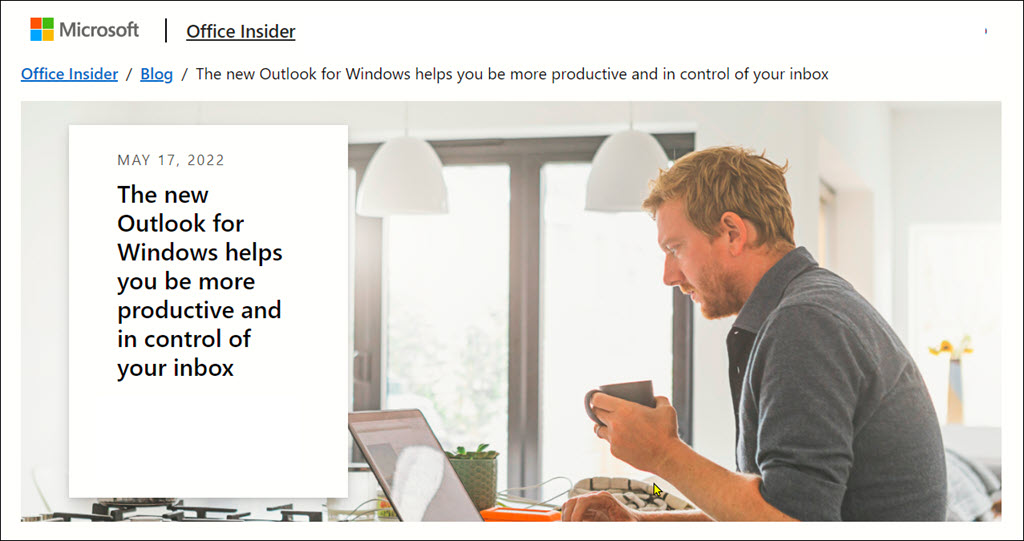 Don’t be worried about your dear, creaky, much-used-but-seldom-loved Outlook program. This is Microsoft Land, where words don’t mean what they seem. The branding team only has fourteen words or so to work with, so everything is named Outlook, and in any case your familiar desktop Outlook program will continue to exist until roughly the end of time.

The desktop version of Outlook for Windows needs to be updated. Like, it really needs to be updated. It’s got legacy code that hasn’t applied to anyone for decades. We’ve become skilled at overlooking its antique bits. That’s why bad guys use the “RSS Subscriptions” folder to divert mail when they hack your mailbox – our eyes literally can’t focus on it.

Outlook works well for Microsoft 365 business mail and Outlook.com mailboxes. As the years go by, it’s getting worse at handling any other mail. I put it this way last year:

“It’s not the best program for other kinds of mail. Oh, all the old architecture is still hanging off the back for POP3 and IMAP mailboxes, and you can still create PST files, which are just as unstable and difficult to work with as ever. If you’re still using a POP3 or IMAP mail service, (1) stop, just stop, go get a Gmail or Outlook.com address, and (2) don’t use Outlook. It’s not very good at those any more. And Gmail hates Outlook. They don’t get along at all. Don’t even try.”

But Microsoft is stuck. It has built its reputation with corporations by maintaining compatibility and legacy code forever. Somewhere are companies that built custom add-ins for Outlook back in 1997 and they’re in no mood to change their habits, and Microsoft can’t say no to those sweet, sweet long-term maintenance contracts with huge enterprises.

So the desktop version of Outlook that you use now – it will be maintained more or less forever. At some point Microsoft will stop promoting it in favor of something new, but it will still be there.

But the desktop Outlook program won’t get any better. If you find it clumsy or buggy today, it will probably still be clumsy and buggy tomorrow.

That’s an elaborate explanation of why nothing will change. So what’s this “new Outlook”?

Hang on, we’re not done with the background.

Simple, streamlined, attractive, fast enough. (But not as fast as Gmail. What is Google’s secret magic that makes its services so fast?)

If you are accustomed to the desktop version of Outlook, you will discover that webmail has a frustrating limitation. I don’t know what it will be! It will be uniquely yours. But I bet there’s something that you think is missing or wrong or just frustratingly different than desktop Outlook. I used Outlook webmail exclusively for six months and it was fine, just fine, but I gave up and went back to cluttered familiar desktop Outlook because I missed Quick Steps. It will be something different for you, some muscle memory itch that you have to scratch.

But take a look at that webmail interface. We’re going to meet it again soon.

Microsoft has been hinting at a completely rewritten version of Outlook for more than a year. “Project Monarch” was the code name for a unified mail client that will work identically everywhere – Windows, Mac, webmail.

After 18 months of development, late nights of hard work by armies of programmers, Microsoft released a preview of the new Outlook. And after all the meetings and whiteboards and deep thought . . .

The new Outlook looks a lot like Outlook webmail.

Technically it doesn’t run in a web browser. It opens up its own window. But you can install Outlook webmail to open in its own window, too. In fact the new Outlook seems to be not much more than a wrapper for webmail.

Aha! I hear you say. Webmail can only be used when you’re online! Surely the new Outlook . . . and then you’ll see my sad expression as I hold up my finger and make a Tch! sound and, well, in its current preview form, the new Outlook won’t work offline.

Actually the preview is far more crippled than it looks. It’s only available to preview testers in the Office beta channel, so Microsoft doesn’t pretend it’s finished like it did with Windows 11. (Oh, snap!)

In other words, it’s not just that it looks exactly like webmail. In its current state, it’s far weaker than webmail.

Which is just weird.

Be fair. Read Microsoft’s description of the features of the new Outlook. You might see something that looks swell. For me, it’s dragging and dropping messages to Calendar and To Do, except, hmm, I can do that today in webmail, so which features are actually new in the “new Outlook”? Hard to say.

Let me guess what’s going on. Under the hood Microsoft is building out an infrastructure to link all of its enterprise tools tightly together. The new Outlook is tied deeply into Microsoft Teams and Microsoft Loop, which is itself a vast enterprise system that theoretically will be used for everything collaborative, from project notes to polls to calendars. With luck, you will never see the word “Loop,” even if you use something built on it, but with Microsoft you never know.

The payoff for the new Outlook, then will be (1) for enterprises, and (2) not just for Outlook but for all the Microsoft services that wind up woven together in a big seamless array of intuitive, bug-free productivity apps, because that’s what we count on from Microsoft, right?

In the meantime, use webmail and tell yourself it’s a “new Outlook.” Might as well. It’s the same thing. Then go back to the desktop version of Outlook and try not to look at the obsolete folder named “Conversation History,” except now that I’ve mentioned it you won’t be able to unsee it.