The Meta Quest Pro Is Oh So Expensive But Wonderful 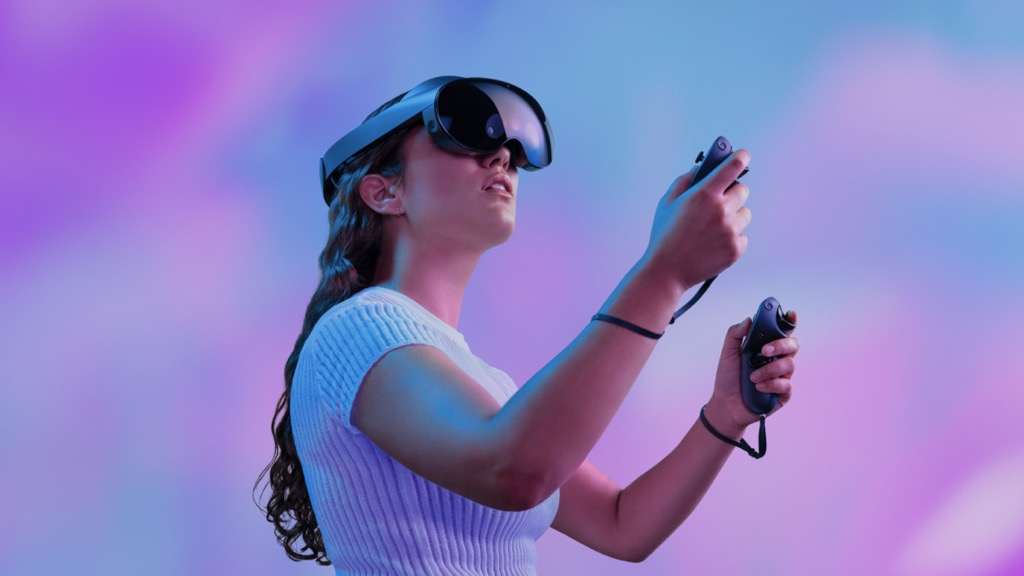 The Meta Quest Pro is a virtual reality headset introduced in October. It has the best combination of features currently available for VR. It costs $1,499.

That’s really all you need to know, because everything else flows from that startling price tag. Obviously you’re not going to buy one. The details are pretty theoretical for you. But stick with me, it’s an interesting device at an interesting time.

These early days of VR remind me of the wild west era in personal computing, the glory days in the 1980s when early tech adopters replaced computers every year or two even though they were expensive. We obsessively compared specs and there were incompatibilities and bugs galore. It was awesome!

That’s where VR is today. We’ll go through the same process in a few years with augmented reality glasses.

Let’s put the price in perspective, then I’ll give you some early impressions of the Quest Pro.

There are three possible uses for VR: games, social, and business.

Games No one at Meta has any illusions that consumers will buy a $1,500 headset to play games. It’s a great gaming headset but not priced for that market, outside of a few excited early adopters.

Social Social networks are splintering into a hundred shards. Facebook is in its twilight years, Twitter is imploding, and conversations are moving to services you’ve never heard of, Mastodon and Discord and Twitch and Scuttlebutt and oh so many more. At some point there might be appealing places to gather in VR. Meta is trying to be the first out of the gate with Horizon Worlds but so far it looks awful and is going unused.

The Quest Pro is not priced for socializing. It’s not clear there will ever be a compelling social VR environment with broad appeal. I don’t see Ready Player One in our future.

Business Meta has wild coffee-fueled dreams about businesses adopting VR for meetings. It requires a vivid imagination and a suspension of disbelief, because there is almost zero chance it will happen at scale – the devices are expensive to deploy and support and almost no one in a large company will agree willingly to put them on.

But Meta is swinging for the fences. It’s the first company to have a decent VR business space, Horizon Workrooms. Meta is partnering with Zoom and Microsoft to integrate with Horizon Workrooms, hoping to dissuade them from developing their own VR apps. In addition to integrating Teams into Horizon Workrooms, Microsoft also announced that it will support the Quest Pro in Azure Active Directory and Intune, meaning businesses will be able to fold the VR devices into their existing security setup and infrastructure.

And hey, who knows, maybe some businesses will buy a few wagon loads of Quest Pro headsets and try them out. Enterprises have lots of money.

Mostly, though, Meta hopes developers will buy the Quest Pro and use it to develop new applications that will usher in the less expensive consumer devices down the road. Developers have to buy all kinds of stuff at crazy prices to get a head start.

The rumors are that Apple’s VR headset will be two thousand dollars. Apple will be doing the same calculation as Meta: attract some early adopters and well-heeled Apple fans, but mostly attempt to rally developers to develop the ecosystem that will set the stage for everyone else a year or two later when a cheaper alternative is available.

Why the Quest Pro is my new best friend

I’ve used a lot of VR headsets. The Quest Pro is a big step forward – higher resolution and faster performance than any untethered headset to date. If you add an optional cable connected to a gaming PC, the image quality is comparable to or better than the best tethered VR headsets.

I’m fine with some design choices that others criticize. Example: the Quest Pro is not sealed against outside light. It sits away from my face and I can see bits of the outside world at the bottom and sides of my field of vision. It’s not quite as immersive as a sealed headset. I’m okay with that.

It’s well balanced with the battery moved to the rear. I find it comfortable, even in extended sessions. I gather some people don’t agree when I read critical reviews. I feel bad for them but oh well. The battery life is short – in my experience 1 ½ to 3 hours. That’s a shame but I’m not obsessed by it. I bet it improves in the next gen devices.

Resolution is crisp and clear. I can wear it comfortably over glasses and the adjustments for width and distance from face totally work for me. Again, your mileage may vary. There are lots of naysayers online. Here’s a thoughtful review of the Quest Pro from The Verge written by someone who does not like it one little bit and finds it deficient in every way. One of the problems is there is no way to guess whether your reaction will be more like mine or more like hers. Buying a Quest Pro would mean playing VR roulette. 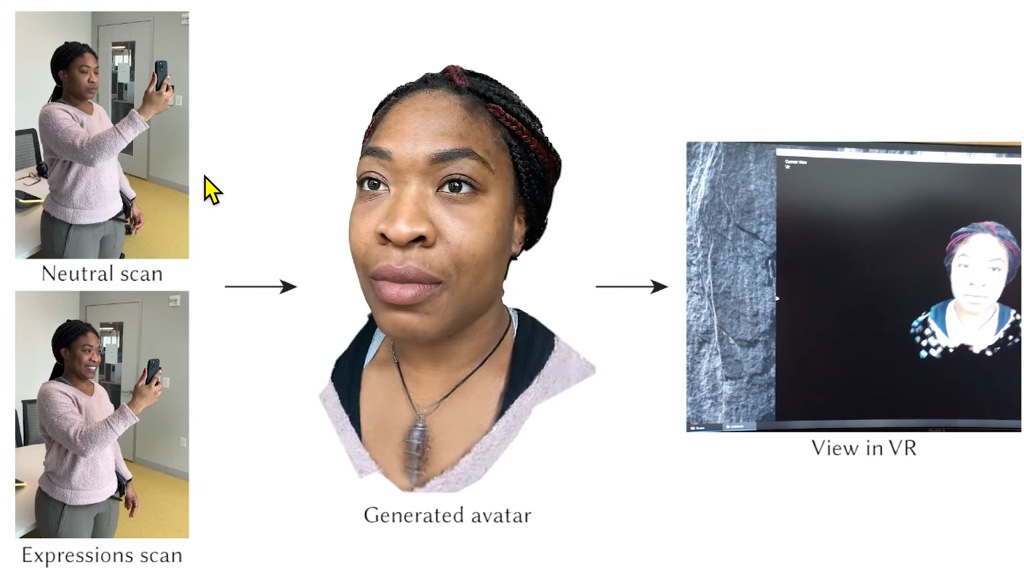 There is some very impressive face-tracking technology in the Quest Pro. Cameras are pointing at your face and other people in Horizon Workrooms meetings can see eye movements, smiles, and subtle changes in facial muscles. At the moment, those effects appear on the cartoon avatars but Meta is preparing photo-realistic avatars – you’ll scan your face with your phone, then software will animate your features to match your facial expressions. That will be a big deal if it works well; it might tip the scales for some businesses. It’s a difficult technical problem and might not appear for a while. 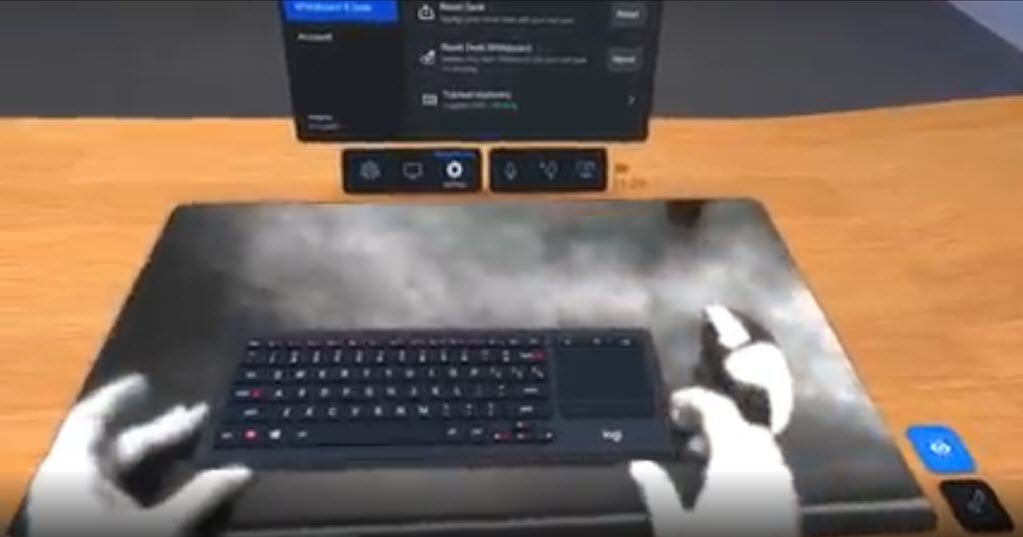 Meta has done clever things to deal with the input problem – how to work with devices that you can’t see when your eyes are covered. Horizon Workrooms assumes you’ll be using a laptop at a desk, so it leads you through a few quick gestures to outline where the physical desk is located. “Passthrough mode” creates a rectangle on the desk in the virtual world and uses the cameras on the headset to pass through the video of your real hands on the real physical keyboard and mouse. Meanwhile, a remote desktop app displays your laptop screen on a virtual screen in Workrooms, small or large, single or multiple displays, all crisp and usable. A click allows the screen to be shared with a group on the whiteboard.

I can work comfortably with the Quest Pro – not in meetings, just sitting at a virtual desk. I set up two or three monitors, put some tunes on the built-in speakers (which are excellent), and stay focused. It helps that I’m completely comfortable in VR. Improvements in the lenses and processors will reduce nausea for many people in the next few years but I seem to be particularly resistant – doesn’t bother me at all.

Although Horizon Workrooms works surprisingly well once a meeting is under way, setting up meetings right now is messy. Invitations to a meeting are done from a website outside of VR and it’s hit or miss on whether it will work so someone can join you. I trust the experience will improve over time. I’m a trusting, optimistic person. That might not turn out well.

Is that enough to make you join me in VR? If you have a lot of money or an indulgent spouse who gives you permission to play with the latest tech gizmos, sure! Or make a mental note to keep track of developments in 2023. If you’re an Apple devotee, you might want to wait for their next expensive plaything, the Apple VR glasses expected next spring/summer. If your budget only covers sensible decisions, consider Playstation VR next May or the Quest 3 in the fall.

Gamers, early adopters, tech enthusiasts – see you in the metaverse! Whatever it turns out to be.