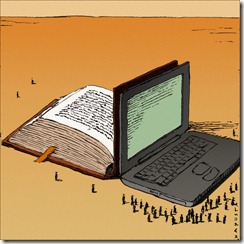 Technology has left everyone feeling a bit adrift. Everyone fears that they don’t have basic skills that other people seem to have mastered – whether it’s finding files on a computer or locating information online, running programs or using handheld devices. Some people are ahead of the curve, some are behind, but almost no one feels confident. It’s hard to step back and realize how much you’ve learned about computers and the Internet in the last ten years.

Here’s an anecdote about a mistake. I don’t mention it to make fun of the people involved. We’re all fighting our way up this learning curve, every day.

A couple of weeks ago a popular blog, ReadWriteWeb, posted a story about Facebook. For a while the story was the top link in a Google search for “Facebook login.”

In the next few hours, many people arrived at the page because they typed “Facebook login” into Google and clicked on the first link. They believed they were on Facebook and concluded that there had been a terrible redesign which made it difficult to find the link to log in. There are literally hundreds of comments from people asking for help to log in or complaining about the redesign. 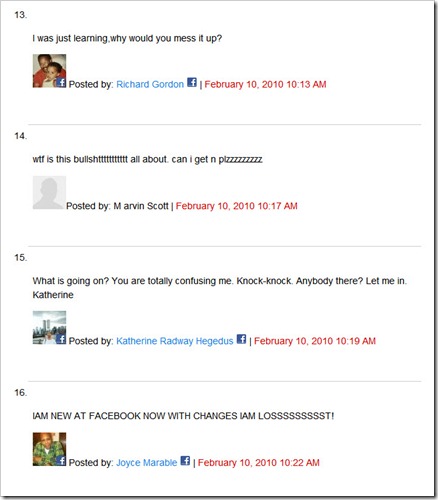 If you’re an experienced web surfer, this is an obvious mistake. It’s hard not to feel a little patronizing to the poor confused n00bs. As one blogger put it:

It’s like… Like if you asked a friend if there was a Starbucks in his neighborhood and he said, yeah I think there’s one half a mile down, maybe. And you drive half a mile and see a big carwash place, and you park and walk in and ask to speak to the manager. And you tell the carwash manager how unhappy you are with this terrible new Starbucks redesign.

Think about it a minute and it’s not quite as harmless and funny. People who can’t tell the difference between Facebook and a blog with an article about Facebook are also targets for phishing scams, which trap people who can’t read a URL and tell if they’re really on an official bank site.

Here’s an article about the Facebook login incident that turns into a thoughtful essay about information literacy. The article considers some of the reasons that some people are slower to pick up new technical concepts: lack of confidence, disabilities, difficulty understanding the way information is stored on a computer, the mystifying nature of complex URLs, and natural confusion as we struggle to absorb new abstract concepts – blogs, social networks, news feeds, and more.

Then the writer turns to some of the things that might help move people forward, including suggestions for how computer classes in high school and community college might be redesigned to be relevant in 2010 instead of glorified typing classes. It’s an interesting checklist that touches on many of the things that all of us will struggle to understand in the next decade or so.

To create a computer course for laymen that does not do them a disservice, it should be rooted in things that we can reasonably anticipate will not change. I’m not quite sure what those are but the stumbling blocks outlined in the previous section are a good place to start. It should combine practical computer skills and general information literacy. It should be required and it should be rigorous, not a blowoff course.

Imagine how many fewer bank accounts or email accounts would be hacked if a section on the final exam gave students URLs and asked them to identify the domain name, the subdomains, the path, the port, and the protocol. This sounds like esoteric technobabble at first. But if high school students are expected to know how many valence electrons molybdenum has or how to define trigonometric functions in terms of each other, it’s highly practical by comparison.

Teaching students how a hierarchical file system works would make sense. It could even briefly cover the directory structures on each popular OS at the time and where things go. I have my doubts on how long the idea will last, but I’m betting at least another 15 years.

I’m hoping email (as a means of communication) will die a horrible death in the near future. But if it doesn’t, its technical intricacies should be taught in some detail.

Such a course might also include a primer in Boolean logic and proofs, plus basic set theory — nothing too comprehensive. This would certainly allow students to refine their Google queries if the first result isn’t right (assuming they actually check).

Or there could be projects where students are asked to make simple relational database applications (not requiring any programming — just using a GUI) and to construct queries that join across tables to locate information. Or maybe they could use Yahoo Pipes to create mashups of multiple sites to solve a given problem.

Hell, a basic non-mathematical introduction to public key cryptography wouldn’t be a bad addition. I don’t think that’s going away for a long time, at least not until we get quantum computers.

This course could give students research projects to hone critical thinking. They could be given news stories, Wikipedia articles, and whitepapers by interest groups and be asked to get to the heart of the matter and argue one way or another. Students should be able to recognize logical fallacies and propaganda techniques so often employed by politicians and forum trolls alike.

The crux of all of this is that it’s becoming an essential skill for any capable person in our society to be able to sift through vast amounts of information of uncertain quality to find the best. Teach this and the rest effectively teaches itself.

Ultimately, if schools were completely successful in designing a curriculum for the 21st century, they might find themselves the architects of their own obsolescence as institutions.

But until then, teaching kids how to read a URL so they don’t get scammed by the Nigerians would be a nice improvement.