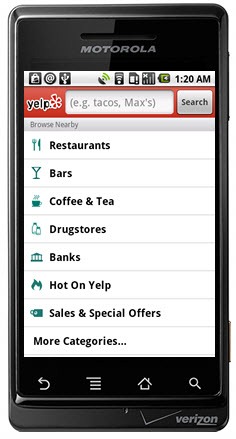 While we’re talking about smartphones, I should mention another way that your phone can use its knowledge of your location to do something interesting.

Google added an unassuming link named “Near Me Now” on the Google search page on iPhones and Android phones. Click it and you’ll get a short list of categories – Restaurants, ATMS and banks, Shopping, Lodging, and more. Clicking on one will bring up a list of results based on where you are standing at that moment. I just pulled up a list of all the restaurants near my house in two clicks, with addresses, phone numbers, reviews, and links to display a map or street view (and get turn-by-turn directions if I started driving).

Google is responding to a popular app from Yelp that does the same thing, more or less. Yelp’s app is available for every mobile device – Blackberry, Palm, iPhone, Android, plus a web-based version for devices that aren’t interesting enough to get their own app (<cough> Windows Mobile <cough>). It’s got its own wealth of features, including a check-in feature competing with FourSquare, Gowalla, and the rest.

There’s room for Yelp and Google Near Me Now on your phone. Yelp might have more depth for restaurants and lodging, Google might be able to get more details about other kinds of businesses. Try them both!