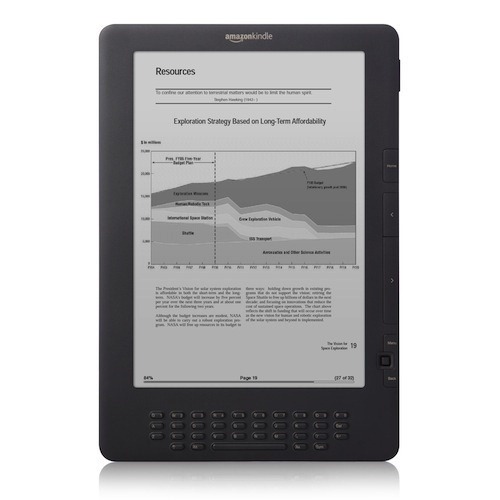 The Apple iPad has been out for a while and it’s become clear that it may fill a niche for some people as a way to read magazines and newspapers, once publishers finish work on the apps and set reasonable prices.

Serious book readers have discovered, though, that an iPad is a terrible way to read books. The backlit screen is bright and glossy and so reflective that it can be used as a mirror, which is attractive at first but seriously tiring for the eyes after a few minutes. It’s virtually impossible to read outdoors on an iPad. The battery on the iPad runs out quickly when it’s used for extended reading sessions.

There is still a place for the Kindle in the market, then, for book readers who would rather have a cheaper single-purpose device that does only one thing but does that one thing very well. You’ll see reviews criticizing the Kindle because it doesn’t play videos or browse the Internet but that misses the point. Amazon doesn’t have to beat the iPad; the two devices are complementary more than competitive and there are enough consumers for each to find a market.

Amazon announced a redesign of the larger Kindle DX today, with a sleek graphite case and better screen technology – still only delivering shades of gray but with better contrast and sharper images and fonts. Prices have been dropped on the smaller Kindle (now $189, down from $259) and the new Kindle DX (now $379, down from $489). It’s slim and stylish – it might only be changed in modest ways but I think the new Kindle DX is a much more attractive device than the white plastic Kindles.

If you join the Kindle world, you can read books from your Kindle library on almost any device (and you’ll arrive at the place you left off in your book regardless of which device you pick up). Amazon delivered a free Kindle app for Android phones last week, making it possible to read your Kindle library on a Kindle, PC, Mac, iPhone, iPad, Android phone, and a Blackberry.

I tried the free Kindle PC software on my notebook so I could read books on the road in a pinch. The software is simple and intuitive but one thing wasn’t right: book pages are easier to read in a portrait orientation, with narrow edges at top and bottom, but notebook screens are in a widescreen landscape orientation. If you’ve got a thin notebook or netbook, try a free utility named EEERotate, which will rotate your computer display 90 degrees when you hit the hotkey Ctrl-Alt-right arrow. Hold your notebook/netbook like an opened book, with the keyboard on the side, and your Kindle book looks quite natural. Now make no mistake – you won’t look quite natural. You’ll look like an idiot. But it might be worth the tradeoff, because your book will be easier to read. 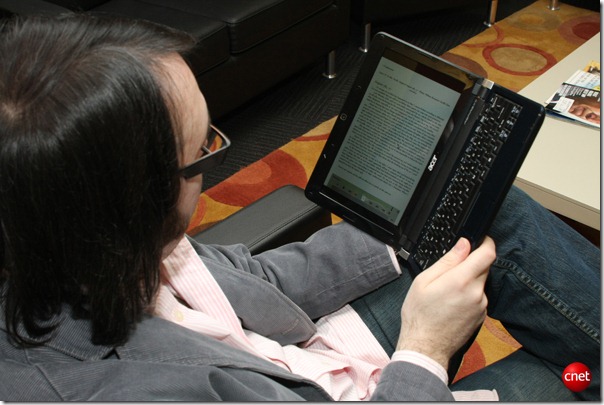