Tidbits From The Consumer Electronics Show

The Consumer Electronics Show is keeping gadget freaks happy in Las Vegas this week. I can’t begin to tell you anything in depth – it is a frenzied scene, with close to a hundred thousand people looking at devices from literally thousands of exhibitors. Only a tiny handful of the items displayed will ever be important enough to come to your attention. Trying to guess which ones those will be is an exercise best left to the young.

Here are quick notes of things that have caught my eye – literally just a few items to give you the flavor.

It’s the year of the tablet! The early favorite is the Motorola Xoom pictured above, running a version of Google’s Android system that will be customized for tablets. It’s very pretty but no one knows yet how Android will look on tablets and there’s no way to guess what the price will be. There are dozens of Android tablets being announced at CES, with mockups and promises. They may be swell.

Microsoft announced that it would be an important player in the tablet world – at last year’s CES. Then 2010 passed with retreats from the handful of Windows tablets that were announced (most notably, HP bailed out from its proposed Windows tablet when it bought Palm), and Microsoft lapsed into silence. Steve Ballmer, Microsoft’s CEO, made only a glancing single reference to the word “tablet” in his keynote address a couple of days ago, and the only rumor of any substance from Microsoft involves a customized version of Windows for tablets that might be released two years from now. Microsoft appears to be heading toward irrelevance in the market for mobile devices – which is the market that will define our tech world going forward.

Apple does not attend CES. Year after year, it has stolen all the thunder from CES announcements by making its own announcements of products that are frankly more interesting than anything at CES. Read this article – a funny (and revealing) history of Apple’s consistent disruption of CES over the years.

Apple does not appear to have anything planned that directly overlaps this year’s show, other than an App Store for Macs that seems underwhelming. (Like so many Apple ventures in the last few years, I say that with full awareness that it may turn out to be wildly successful and redefine the world of software distribution. That’s the way it goes for Apple these days.)

Instead, what I expect Apple to do soon is announce the next generation of the iPad. There are only rumors but it’s certainly going to have a front-facing camera, it will likely add some ports, and who knows? Removable storage? Removable battery? Extra speed? Likely to have a smaller bezel. Maybe the price will drop a hundred dollars or more.

Instantly the bar will be raised. I can’t easily imagine that the Android tablets will measure up to the new standard set by Apple. The iPad is already a gorgeous piece of work. It doesn’t directly impact your existing relationship with your cell phone carrier, so there’s no disincentive to buy one (as there is with the iPhone). Why would you buy another brand? 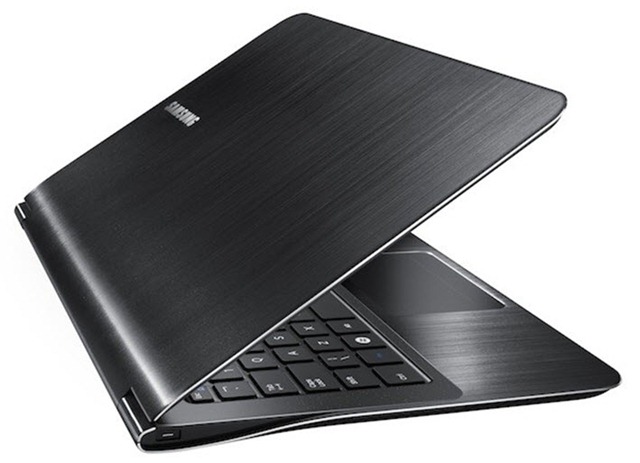 That’s a picture of the Samsung 9 Series laptop. It’s similar in size to my adored Dell Vostro 13 – same 13.3” screen, ever so slightly thinner, slightly lighter at 2.89 pounds. But the styling! That’s unbearably sexy. Samsung has equipped it with a Core i5 processor and a 128Gb solid state drive, which means it should also be blindingly fast. It won’t be cheap but, well, who cares? I swoon.

There is an unbelievable frenzy around developing services for online video. New boxes are appearing left and right to deliver video on demand to your living room or tablet. CES is full of them.

Comcast is depressed that you want to stop paying it for premium cable channels. It wants to charge more for the bandwidth you’ll use to stream video. It’s either going to set up a mechanism to charge extra if you go over some monthly cap, or start moving its fees around based on what you’re doing online. (The cell phone providers have the same idea for their new high-speed 4G services.)

There are literally dozens of companies making boxes designed to stream video to a TV.  Apple TV, Boxee, Roku, Google (with some hardware partners), lots more.  None of them are quite right. (Google’s was so bad that it was withdrawn a couple of weeks ago.) It’s hard to blame them – the sources for online video are currently fragmented and incomplete. Netflix and Hulu are the big players but not the only ones.  None of them have a complete selection, and none of them are likely to in the foreseeable future.

That’s because the studios hate all of it. Hate, hate, hate. They can’t stand the idea of someone else besides them making money from delivering video or getting the revenue from the advertising that you’ll see.  The idea of someone else making a profit from online video has them dizzy with frustration.  They’re paralyzed. The studios have plans to try to bankrupt Netflix when contracts come up for renewal this summer, and generally seem to have no appetite for making more content available at all.  Hulu stands the best chance of surviving for television shows, but the studios can’t bring themselves to deliver all their TV content to Hulu either. Apple delivered a cheap, well-designed Apple TV box built on video purchased or rented through iTunes, but the studios are suspicious of Apple, too, and don’t want to deliver all their content there either.

It’s a complete mess.  Most of the gadgets and services on display at CES will sink without a trace. If you’re in the market, dive in any place.  But no matter what you do, don’t assume that you’ll be doing the same thing six months from now.

Microsoft acts as if CES is an important platform. Steve Ballmer delivers the keynote address and the company sends platoons of people to show off the latest and greatest.

It’s got nothing this year. It’s hard to describe how little it offered of substance. Ballmer went over some old, ambiguous sales figures; mentioned that he was terribly confused that people weren’t realizing how swell the Windows Phone is, and showed off a new version of Microsoft’s seven thousand dollar tabletop touchscreen device, Surface. And that’s about it.

Apple deserves to be the top tech company in the world. It’s executing on all cylinders in mobile devices. We’ll use desktop computers running Windows and Office for years and decades to come, but our attention – and our pocketbooks – are going to be directed at mobile devices, and Microsoft has nothing to show and seems to have little in the pipeline that will make a difference. Sad.